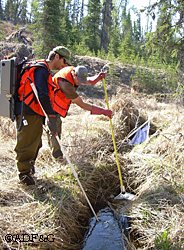 Researchers working with the Reserve use a backpack electrofisher to sample juvenile fish. This work is helping to identify important rearing habitat for salmon. Photo by Coowe Walker.

Last summer, researchers sampled streams across the upper reaches of the major river networks on the lower Kenai Peninsula. As a result, 11 new streams were nominated to the State Anadromous Stream Catalog and Atlas, a major step toward protecting important rearing habitat for juvenile salmon.

The Kachemak Bay Research Reserve partnered with researchers from the Smithsonian Environmental Research Center and Baylor University to sample 30 headwater, or first order, streams in order to learn about the importance of these habitats to juvenile fish. These are called first-order streams because they are the uppermost branches in the watershed system; these are the beginnings of our rivers. Due to their small size, these waterways are beyond the reach of most adult fish and often overlooked as significant fish habitat areas are being identified. The research revealed that they are indeed important to thousands of juvenile fish.

“We’ve clearly demonstrated that the tiny streams are supporting juvenile salmon,” said Smithsonian researcher Dennis Whigham, one of the partners on the project. “Why in some streams and not in others? Those are questions that we still have to answer.”

Recent investigations report that many populations of coho salmon in Washington, Oregon, Idaho and California have become extinct, and that many more are depressed as a result of habitat degradation. Although development is occurring rapidly throughout the Kenai Peninsula, most of the headwater streams in the Anchor River, Ninilchik River, Stariski Creek and Deep Creek watersheds have not yet been impacted. This offers residents of the Lower Peninsula a unique opportunity to avoid mistakes that have plagued watersheds elsewhere. 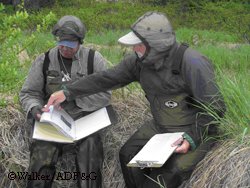 The State Anadromous Stream Catalog and Atlas is a fundamental tool for protecting the integrity of Alaska’s watersheds. Alaska Statute requires the Alaska Department of Natural Resources to “Specify the various rivers, lakes and streams or parts of them” of the state that are important to the spawning, rearing or migration of anadromous fishes.

The Catalog and Atlas are important because they specify which streams, rivers and lakes will be given protection as known significant habitat for anadromous fish species, such as salmon. Activities, such as road crossings, or hydroelectric projects that may affect those habitats are reviewed by the Department of Natural Resources, and will only be permitted if the project plans provide for the proper protection of fish habitat.

Water bodies that are not specified within the Catalog and Atlas are not afforded that protection. To be protected, water bodies must be documented as supporting some life function of an anadromous fish species, such as salmon, trout, char, whitefish, and sturgeon. Anadromous fish must have been seen or collected and identified by a qualified observer. Most nominations come from Department of Fish and Game fisheries or habitat biologists. Others are received from private individuals, companies and biologists from other state and federal agencies. 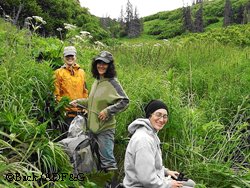 KBRR watershed specialist, Coowe Walker (center) is joined by acting manager, Amy Alderfer and field technician Megan Murphy, as they prepare to sample a stream. Photo by Jeff Back.

The catalogue currently lists about 16,000 streams, rivers or lakes around the state, which have been specified as being important for the spawning, rearing or migration of anadromous fish. Based upon thorough surveys of a few drainages it is believed that this number represents less than 50 percent of the streams, rivers and lakes actually used by anadromous species.

If you would like more information about this project, please contact Coowe Walker, coowe.walker@alaska.gov watershed specialist with the Kachemak Bay Research Reserve. If you would like more information concerning the Catalog and Atlas, or have questions about the nomination process, please contact J Johnson, Habitat Biologist, Alaska Department of Fish and Game.

This project is funded by a grant from the US Environmental Protection Agency and by Baylor University and the Smithsonian Environmental Research Center.

Coowe Walker is the Watershed Specialist for the Kachemak Bay Research Reserve (KBRR), based in Homer, Alaska. KBRR is part of a national system of 27 reserves around the country, and is operated jointly between the National Oceanic and Atmospheric Administration and the Alaska Department of Fish and Game, SportFish Division. More information on the Reserve’s research and education programs can be found at www.kbayrr.org.