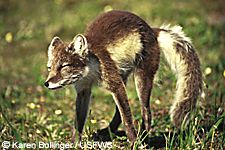 We humans shed twice a year like most mammals, and our hair turns white like some foxes, weasels and lemmings do in winter. But our seasonal cycles are much less pronounced, and it's age, not the need for camouflage, that triggers our color change.

A white coat against winter snow is the next best thing to invisibility, and that's important for predators and prey. Arctic foxes are both. They hunt voles and lemmings, and in the high Arctic they trail after polar bears and glean scraps from their kills. Bears, snowy owls and golden eagles will eat foxes given the chance, and the foxes' white winter coat helps them to hunt and hide.

Whether hair is on a fox or a human, hair is white because it lacks pigment. Animals have cells that produce melanin, the natural pigment that gives hair, skin and eyes color: eumelanin is responsible for black and brown shades and phaeomelanin for red and yellowish colors. Albinos can't produce melanin. When the fox is growing its white coat in the fall, melanin production is shut off and the fur comes in without pigment.

Daylight, not cold weather, triggers seasonal shedding and hair growth. Animals register changes in the photoperiod - the hours of daylight - which spurs the secretion of hormones such as prolactin and melatonin. This has been duplicated indoors in experiments - shortening the photoperiod induces hormone production and the growth of the winter coat, and lengthening it artificially simulates the springtime phase of the cycle.

The human head carries about 100,000 hair follicles, and each is capable of growing a new hair many times over a lifetime. These follicles are not synchronized as closely as those on an Arctic fox or snowshoe hare, for instance. We shed about 50 hairs a day, and when seasonal changes trigger the spring and fall shedding cycles, that number may double. That's a small turnover. The snowshoe hare sheds and replaces its entire coat in just a few months.

Genetics also plays a role. Arctic foxes have several color phases. Some, in the far northern realm of permanent snow and ice, remain white year-round. Others undergo the transformation from summer brown to winter white. A similar thing happens in reverse with snowshoe hares, which range from the Pacific Northwest to Alaska. Snowshoe hares in Oregon and Washington remain dark brown throughout the winter, and their northern cousins turn white for winter. 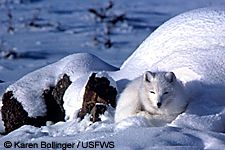 Long-tailed weasels show this same variability across their range. In the north, the brown weasels turn white in winter. In the southern part of its range, some individuals molt to white, while others remain brown. The color change is evidently genetic: if a northern weasel is captured and taken south, it will still turn white in winter, while a southern weasel moved north will remain brown.

In Alaska, we're more likely to see the long-tailed weasels' smaller cousin, the ermine, which invariably turns from summer brown to winter white each season. The ermine keeps a black tip on its tail, which may be a defense strategy. In the winter, a predator's eye may be drawn to the black tip of the tail moving against the white snow, and if it strikes at this black spot, it will miss the ermine's body.

The collared lemming is the only rodent that turns white in winter. Lemmings are a kind of vole, very similar to mice, but lemmings are adapted to northern life and have short tails, rounded faces and long fur that nearly hides their stubby ears. They are active all winter, feeding and tunneling beneath the snow, and hiding from snowy owls and foxes.

In summer, collared lemmings are gray with a buff to reddish-brown tone, with dark lines down the back and on the sides of the head. The winter coat is completely white. The lemming has another seasonal adaptation that coincides with the color change: two of the claws on its forefeet become enlarged to help dig through crusty snow.

Mammals aren't the only Alaskans to use snowy camouflage. The willow ptarmigan, Alaska's state bird, molts its brown summer plumage for a set of white winter feathers. All three kinds of ptarmigan, rock, willow and white-tailed ptarmigan, are found in Alaska, and all turn white in winter.

Alaska has a few animals that are white year-round: snowy owls, mountain goats, Dall sheep and polar bears. Polar bears actually have black skin beneath their translucent white coats, the better to absorb solar radiation when it's available.