Caribou in Trouble
On Alaska Peninsula

By Elizabeth Manning and Lem Butler 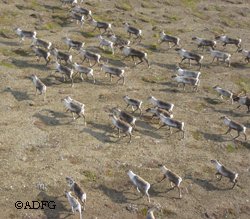 “Any harvest at all would be bad for the herd,” said Lem Butler, King Salmon area biologist for the Alaska Department of Fish and Game. “We can’t lose any bulls. We can’t lose any females. Basically there is no surplus at this point.”

Both state and federal managers closed the caribou hunt in Unit 9D by emergency order last month after a Fish and Game aerial survey indicated the herd could be as small as 600 animals. That’s down from 4,200 animals in 2002.

Declines in this herd are not new – the last decline began in the early 1980s but the herd rebounded in the late 1990s until the population began crashing again in 2002. This summer’s survey counts were so low biologists had no alternative but to close the hunt.

A 2007 joint state-federal draft plan for management of the herd sets a population goal of 3,000 to 3,500 animals and calls for a hunting closure when the population falls below 875 animals.

Because of the guidelines, it was a clear-cut decision for both state and federal managers. But it will still be difficult for local residents who enjoy hunting caribou. The decision will particularly affect the communities of Nelson Lagoon, Sand Point, King Cove, Cold Bay and False Pass.

Those communities depend mainly on fish and marine mammals for subsistence but do harvest caribou when they can to supplement their diet.

To spread the news of the closure and to encourage cooperation from hunters, Butler will be sending out a newsletter this month to local residents and guides explaining why the hunt was shut down and detailing what is currently understood about the herd’s decline.
Butler said research and inventory work so far point to predation by wolves and bears as the likely cause of the decline, but nutritional problems are another possible factor. Biologists still need to learn more, he said.

While there are notable differences between the problems faced by each herd, Butler said, there are enough similarities to speculate that the declines may be related.

The Northern Alaska Peninsula herd, which has been monitored more intensively than other nearby herds, has suffered from extremely low calf recruitment, which coincides with similarly low recruitment in the Southern Alaska Peninsula herd. Although less is know about the Unimak caribou herd, the herd appears to be faced with similar problems based on the number of calves observed during an aerial survey in 2005.

Initial investigations have identified a combination of low pregnancy rates and survival as the main reasons for the low calf recruitment.

For the Southern Alaska Peninsula herd, fall calf:cow ratios have been as low as 1:100 in recent years. Generally a ratio of more than 25 calves for every 100 cows is needed to allow the population to grow. Pregnancy rates were found to be about 80 percent when you’d hope for a rate more like 85 to 95 percent, Butler said.

The low pregnancy rates found in some herds imply that at least some caribou are nutritionally stressed, Butler said. Range conditions may be playing a role and in some herds, heavy parasite loads may also be affecting the caribou’s health. High parasite loads were found during recent studies of the Northern Alaska Peninsula caribou herd, for example. Not all herds have been studied yet to see how widespread the parasites are. 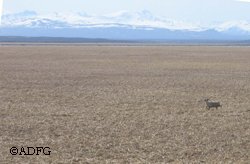 Initial investigations have identified a combination of low pregnancy rates and survival as the main reasons for the low calf recruitment.

The Mulchatna and Nushagak herds have had better calf recruitment than neighboring herds on the Alaska Peninsula, but have also been in decline since the late 1990s associated with reduced calf recruitment. Biologists studying these herds believe that there is evidence that some of the current problems faced are associated with rapid population growth.

When caribou herds grow rapidly followed by an extended period of poor calf recruitment, Butler said, the age structure of the population becomes biased towards older age classes. Deaths become more frequent as animals reach the limits of their natural lifespan which can result in great losses to overall population of the herd. The consequences to this old-age structure in caribou are often first seen as a decrease in the number of bulls, which have a shorter life-span than cows.

Biologists are continuing to investigate links between the declines of the five regional caribou herds. The work is being led by Fish and Game, with support from the U.S. Fish and Wildlife Service, National Park Service, Office of Subsistence Management, and the Bureau of Land Management.

Prior to the closure, a registration hunt for Alaska residents had been scheduled for Aug. 10 to Sept. 30 and Nov. 15 to March 31. A non-resident hunt, which had been allowed the year before in the fall only, had been canceled by the Board of Game due to concerns about the herd.

Now no hunting will be allowed at all for this year, and likely in future years too, until the herd shows signs of recovering, Butler said.

The last time hunting on the herd was completely shut down was in 1993. It reopened in 1997 after the herd appeared to be recovering.