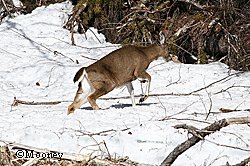 During winter, deer rely on stored fat reserves, and subsist on a meager winter diet of evergreen forbs (leaves) and woody browse such as blueberry, yellow cedar and hemlock. Lichens on the trees are eaten too. However, it is critical they find fresh food in spring. In this rough year of deep snow and late snowmelt, it appears reserves ran out for many of them before plants emerged from the snow and grew new leaves.

As deer hunting season opens in Southeast Alaska, after last winter’s devastating snow and cold weather, hunters are uncertain about what to expect. Those who have been outdoors regularly this summer, such as Sitka hunter Erin Kitka, have seen disturbing signs where forest meets beach – fur and bones – the remains of deer that starved.

“It seemed there was a lot more winterkill this year than last year,” Kitka said. “There’s one on every beach, just right in the trees.”

Phil Mooney, area biologist with the Alaska Department of Fish and Game, said he’s been getting a lot of questions from concerned hunters. It’s his responsibility to recommend whether the population is strong enough to support a hunt. Mooney said he appreciates observations shared by Kitka and others, which, combined with his own field work, help him figure out what is happening with deer and other animals hidden in the rainforest.

He’s cautiously optimistic that the deer populations on what are called the A-B-C islands – Admiralty, Baranof, and Chichagof – remain in generally good condition. “Although we did experience some winter-kill in most of the unit, the areas of heavier losses were generally isolated to narrow fiord bays, north-facing slopes, and open-terraced muskegs that experienced deep and persistent snow into early May,” he said. There are no changes in bag limit or season anticipated, though he said he will be watching the situation as the season progresses.

That’s good news for hunters and their families. Venison is an important food in the region, and has special importance to the native Tlingit people. “It’s something that a lot of people have grown up with and used as a staple of their diet,” said Woody Widmark, tribal chairman for Sitka Tribe of Alaska. Deer is also one of the customary and traditional foods that are prepared for memorial potlatch ceremonies, he said.

The game management unit that includes Sitka (Unit 4) draws about half of the hunting effort and accounts for most of the deer harvest in Southeast Alaska. In recent years, total annual harvest in Unit 4 has been 8,000 to 9,000 deer. Mooney said that while the harvest tally isn’t final, it appears that several thousand more deer than usual may have been taken in 2006. 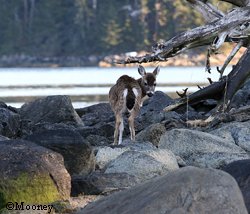 Hunters should hunters target bucks and fawns, rather than does, especially after the breeding season in mid-November, to help protect the reproductive capacity of the population.

Mooney remembers seeing boats heavy with venison in the Sitka harbor back in November. He knew that meant deer were being forced by snow onto beaches, where they were easy prey. But no one knew then just how hard the winter would be or how long the snow would last.

“It was a very exceptional high snowfall year,” said Aaron Jacobs, a meteorologist with the National Weather Service in Juneau. “It broke a lot of records.” The best weather statistics in the region are gathered at the Juneau airport, and snowfall there reached an all-time recorded high, a total of 197.8 inches for the winter. Snowfall varied around the region; Little Port Walter on the southern tip of Baranof Island saw a record 275.3 inches of snow. But, in general, the Juneau numbers reflect the unusual year around the region.

Jacobs said the record snowfall doesn’t tell the whole story. Both snowfall and temperature during two months, November and March, affected snow depth on the ground. On the front end of winter, November saw 64.1 inches of snow – 52 inches above normal. And while November’s normal average temperature hovers around freezing, temperatures in November 2006 averaged just 19 degrees, 13.9 degrees below normal. Average temperatures were higher than normal in December (34.1 degrees Fahrenheit) and January (31.0 degrees) by about 5 degrees, but spring was cold. While usually above freezing, the average monthly temperature in March was just 28.3 degrees. Precipitation was high, and precipitation that might normally fall as rain fell heavily as snow. It kept falling and falling, nearly 63 inches of it. Snow built higher and higher on the ground. Jacobs says that at his home he measured a snow depth of 55 inches. That’s higher than a deer’s shoulder.

Some of the snow persisted on the ground into April and May. That late-season snow probably caused much of the winterkill seen on beaches, Mooney said. During winter, deer rely on stored fat reserves. They are used to a meager winter diet of evergreen forbs (leaves) and woody browse such as blueberry, yellow cedar and hemlock. Lichens on the trees are eaten too. However, it is critical they find fresh food in spring. In this rough year of deep snow and late snowmelt, it appears reserves ran out for many of them before plants emerged from the snow and grew new leaves. 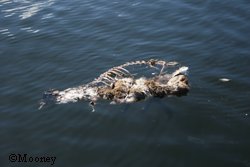 A high tide takes a carcass off the beach - the fate of many Southeast deer last winter. Photos by Phil Mooney

Mooney has been watching the deer situation as closely as possible. He surveyed deer periodically through the winter along a specific route, rating their condition into one of seven classifications. Winter mortality surveys conducted in the spring at 28 sites assessed the extent of winterkill deer on or near beaches. After snowmelt, department employees conducted deer pellet surveys along 18 established transect lines through the forest in different parts of the unit; following most of the transects involves hiking from sea level straight to a high point on the island while counting deer pellets. All of these surveys provide data that can be compared year to year.

It’s clear the deer population took a big hit, but it was large and healthy to start with and so probably survived the blow, Mooney said. Deer populations are highly productive and can rebound quickly from a hard year.

Mooney is currently assessing how well the deer reproduced this year and how fawns are doing. He says he appreciates information others can share with him from their own field observations.

Though he’s optimistic the population remains in good condition, overall, he asks that hunters target bucks and fawns, rather than does, especially after the breeding season in mid-November, to help protect the population’s reproductive capacity. He may have additional recommendations after winter weather begins. “A back-to-back harsh winter in the unit may precipitate changes to the following season and/or bag limit if the impacts are significant to deer,” he said.

Patti Harper is a former news reporter and freelance writer who works as an editor and writer with the Alaska Department of Fish and Game in Juneau.