Doug Vincent-Lang is a Special Projects Coordinator for the Division of Sport Fish at the Alaska Department of Fish and Game.

Alaskans and visitors to our state value halibut fishing, whether it’s done for commercial, sport, or subsistence purposes. Halibut fishing is also an important element of Alaska’s economy, contributing to significantly to economies of Alaska’s numerous coastal communities.

Fortunately, unlike many other highly sought after fish, there are no significant conservation concerns with halibut. However, they are fully allocated and, because they are highly sought after, their allocation can be contentious. Growth in the sport charter industry over the past decade has caused conflicts with other halibut harvesters, notably the commercial longline fishery. Resolution of this issue has been difficult and is the focus of significant efforts by state, federal, and international agencies.

The North Pacific halibut resource is managed under an international treaty, the North Pacific Halibut Act. Because of this treaty, the State of Alaska has only limited management authority over halibut off its coast. The International Pacific Halibut Commission (IPHC) is charged with determining stock abundance and yield levels that will sustain the stock. The IPHC also determines allocation of the resource between treaty partners (the U.S. and Canada). Under the Magnuson-Stevens Fishery Management Act, the North Pacific Fishery Management Council (Council) is charged with allocating the halibut resources within federal waters, and the National Marine Fisheries Service is charged with managing U.S. fisheries to their allocations. The Department assists in this effort by collecting biological information on fisheries removals. The Department also manages the charter fleet by licensing guides and businesses, and collecting information on business operations via a logbook. This array of authorities makes management somewhat confusing and complex.

All parties are committed to developing a plan for the halibut charter industry in Alaska that provides management agencies the necessary tools to manage within established allocations, that allows the industry to grow in an orderly manner, that compensates other sectors for growth, and that minimizes impacts to state-managed fisheries. In February 2007, the Council approved a moratorium for the halibut charter fishery in Areas 2C (Southeast Alaska) and 3A (Southcentral Alaska). This was a necessary first step in the development of a long-term management plan for this fishery. 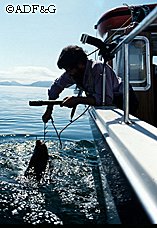 Halibut are a popular sport and commercial fish. ADF&G photo.

Work is also progressing on the development of a long-term plan for halibut fishery management. The Stakeholders Committee appointed by the Council has developed some excellent recommendations, including limited entry programs based on client limitations, as well as modified quota-based programs. They are also exploring options that allow compensated reallocation shifts between sectors to occur. Developing a mechanism to provide for compensated shifts in allocation is a necessary foundation for establishing initial allocations and final management strategies.

In the interim, steps are being taken to bring the charter fisheries closer to their Guideline Harvest Levels (GHLs) in both Areas 2C and 3A. In Area 2C, The Council chose to build upon the newly-released regulations by the National Marine Fisheries Service for Area 2C that allows anglers fishing from charter vessels in Area 2C waters to retain two halibut daily, one of which must be 32 inches or less in length. This action is expected to reduce charter harvests by approximately 540,000 pounds, a level which is not expected to reduce Area 2C charter harvests to below the GHL. To assure that charter harvests are managed to below the GHL of 1.432 million pounds in Area 2C, the Council also chose to enact an annual limit of four halibut for chartered anglers, implemented a federal prohibition on retention of halibut by skipper and crew, and a limit on the number of lines fished on board a halibut charter vessel to the number of clients onboard. In combination, these actions are expected to reduce charter halibut harvests to below the current Area 2C GHL of 1.432 million pounds.

The Council will be reviewing options for bringing the Area 3A halibut charter fishery harvest to its GHL at its October 2007 meeting. A wide range of options is under consideration. An analysis of these options should be released in October 2007.

While significant progress has been made on this controversial issue, more work needs to be done to develop and implement a long term management strategy for the halibut charter fishery. Despite this, I am convinced that a long-term management strategy can be developed in the near future for this fishery that addresses the need of parties.