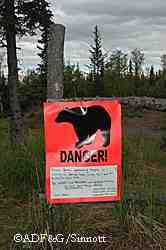 A temporary red sign with the outline of a bear indicates that bears present a higher than normal threat to human safety.

Say you’re out hiking along a trail in or around Anchorage and you run across a sign warning that bears are nearby. Should that sign really be cause for concern? Don’t bears move around a lot? And aren’t bear signs sometimes left up for weeks?

Members of the Anchorage Bear Committee tackled the topic of bear signs several years ago and have since worked out a system so signs are posted only when necessary on Anchorage’s trails and in greenbelts. Temporary, paper signs are better monitored now too, and are supposed to be taken down soon after danger has passed.

So if you see a bear warning sign in and around Anchorage, there’s undoubtedly a good reason it’s there. Last year, only about 10 temporary bear warning signs were posted throughout Anchorage, according to Jessy Coltrane, Fish and Game’s Anchorage assistant area biologist.

“They are not posted lightly,” Coltrane said.

Before the bear committee got involved in the bear sign issue, different land managers all followed different protocols when bears were seen in the area or when a human-bear incident occurred. Some agencies posted every single bear sighting. Other agencies left warning signs up for weeks or months. Sometimes trails were closed when the risk of a bear attack was miniscule.

Another result was that people weren’t paying serious attention to bear signs because they didn’t mean anything anymore, Coltrane said.

Coming up with unified signage for bear warnings was a perfect assignment for the bear committee. The Anchorage Bear Committee – composed of municipal, state and federal land management and law enforcement agencies, waste management companies and several nonprofits – formed in 2001 to share ideas, coordinate management efforts and make recommendations to reduce human-bear conflicts in Anchorage.

Here is what the committee has come up with for Anchorage bear signs:

• A permanent metal sign with red letters on a white background that begins with “You are traveling in bear country…” alerts people that they are recreating in bear country. These are permanently displayed at trailheads and city parks around town and are intended to give people practical tips and to remind them to always be alert and use caution when in bear country.

• A temporary green sign with the outline of a bear indicates a higher than normal likelihood of encountering a bear and urges people to use caution. A green sign might be used, for example, if a black bear is known to be hanging around a campground. These signs are used when biologists or land managers have noted a repeated pattern of a bear hanging out in a certain area and when they believe visitors should take note and use caution. “But it’s not just for a single bear sighting,” Coltrane said. Otherwise, the entire city would be plastered with green bear signs and nobody would pay any attention. 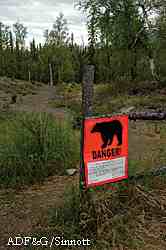 If you see one of these signs, stop and read it carefully. On the bottom of the sign, land managers will write in details about what happened and when.

• A temporary red sign with the outline of a bear indicates that bears present a higher than normal threat to human safety. If you see one of these signs, stop and read it carefully. On the bottom of the sign, land managers will write in details about what happened and when. The sign will often close the trail until further notice, or it may indicate that people can continue to use the trail, but that they should exercise extreme caution. The red signs are used when a bear kills a moose on or near a trail, or when a brown bear has charged someone, Coltrane said. Land managers and biologists try to remove moose carcasses from the trail as soon as they are reported but sometimes that may take some time or may not be possible, especially if the bear is still defending the carcass, Coltrane said. Therefore, a sign is needed to keep people out of the area. Red signs are also used to alert people when a brown bear sow with cubs has been seen repeatedly in a particular area, increasing the likelihood that someone using the trail might surprise the sow at close range.

In addition to watching out for these warning signs put up by the bear committee, Sinnott reminds people to keep an eye out for signs posted by the bears themselves. Bears leave tracks on muddy trails and distinctive scat. If a trail is along a salmon spawning stream, bears can leave dead fish parts on the trail. A dead moose soon starts to smell (if you are downwind) and dead things attract scavenging birds. Spotting a group of magpies or ravens in summer is a potential warning that something dead is nearby, Sinnott said.

Unfortunately, however, it may be difficult to notice these subtle signs when running or biking on city trails, Sinnott noted. The worst place to move fast is near a stream when adult salmon are present because brown bears often forage along these streams all summer and fall. Remember, bears will generally avoid you if they have time, Sinnott reminds people. You don’t want to surprise a brown bear at close range, he said.

Elizabeth Manning is a writer and wildlife educator with the Alaska Department of Fish and Game. She can be reached at 267-2168 or at elizabeth.manning@alaska.gov.