Counting Salmon on the Chena River 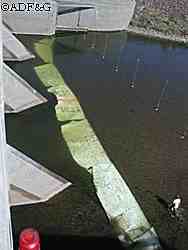 We’ve all heard of counting sheep as a cure for insomnia, but how about counting salmon as a summer job?

Every summer throughout Alaska the Department of Fish and Game hire fisheries technicians to do just that: count salmon as they migrate upriver. It’s important to get a sense for the number of salmon on the spawning grounds (known as escapement).

Depending on the river, counting techniques vary. They include stopping the fish behind a weir and then counting them as they pass through narrow gates; sitting high above the river and counting the salmon as they swim by on their own time; and using a helicopter and/or fixed wing aircraft to fly up and down more remote streams to estimate escapement.

One of the counting projects is located near Fairbanks on the Chena River. The fish counters work from a dam that was built in 1979 to protect Fairbanks from flooding. The dam is usually open to allow free passage of all fish. It is only closed when there is a large build up of ice, or an extreme rainfall event, that if left unchecked could flood downtown Fairbanks. When the dam was built the engineers never imagined that some day fisheries technicians would spend their entire summer walking from one end of the dam to the other in pursuit of the perfect vantage point to see the salmon as the midnight sun worked its way across the sky.

In mid June preparations begin for the salmon’s arrival. Large white tarp-like panels are attached to heavy metal pipes and are placed in the Chena River just upstream of the dam. The panels are necessary for counting fish because even though the returning salmon are bright red, they are amazingly difficult to see against the dark river bottom. The panels are strung on a heavy metal cable stretched from bank to bank. Installation of the panels varies from year to year. In years of low water technicians can easily wade out and place the panels in the river. In high water years the panels must be deployed by boat as the Chena can be swift and cold. 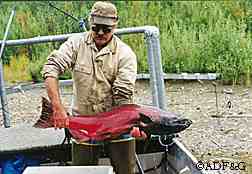 Once the panels are in the water, a strand of spot lights is strung over the panels. The lights aren’t typically needed until August, when the Interior nights start becoming longer and you can no longer see the fish using just ambient light. The lights are tested and then all there is to do is wait for the salmon to arrive.

Chena River bound king salmon typically enter the month of the Yukon River in early June and travel the 1,000+ miles in 30 days or less. There are many fisheries (commercial, subsistence, and sport) and sampling projects along the salmons’ migration route and since the arrival of the first king salmon is always news it is usually easy to anticipate the timing of the salmon.

King salmon on the Chena River are counted 24 hours a day and 7 days a week from late June through early August. Technicians work 8 hour shifts. They do not count 60 minutes of every hour, rather they count the first 20 minutes of each hour and those “snapshots” are extrapolated into a total hourly count. During the remainder of the hour they may talk with the public who visit the dam every summer to take part in the “Salmon Watch” program promoted by the Army Corps of Engineers. Visitors include local children, visiting senior citizens and foreign tourists. All are interested in the life cycle of the salmon and are excited when they see the fish swim over the panels. 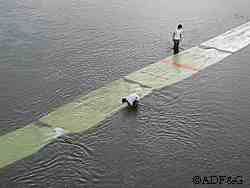 The panels are necessary for counting fish because even though the returning salmon are bright red, they are amazingly difficult to see against the dark river bottom.

At the end of their shift each technician calls in the numbers of salmon to an answering machine. The daily totals are provided to the fisheries managers who use the numbers to make fishery management decisions, based on the numbers of fish that are projected to make it upriver. The Chena River has an escapement goal range of 2,800 to 5,700 king salmon. Therefore escapements projected to be below this range may result in restrictions whereas projected escapements above this range may result in liberalizations to the in-river fishery.

The king salmon still have another five to 50 miles to go before they reach their spawning grounds. Once there, males and females will pair up, dig redds and deposit the fertilized eggs. These hatch and grow into the progeny that will perform this same cycle in four to six years. After spawning, the spent salmon die and their carcasses wash downriver. Some carcasses will be eaten by bears and eagles. Others wash through the dam and may be observed by the same fisheries technicians who saw them a few days earlier as a determined fish making its way upriver.

When all the king salmon have made it past the dam, the panels are removed from the Chena River and stored until it is again time for the new crop of salmon to return.

Audra Brase is a fishery biologist with the Division of Sport Fish based in Fairbanks.