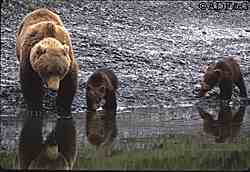 Across North America this spring, thousands of baby animals are enjoying their first meals. For mammals, that’s mother’s milk. Bear cubs are getting some of the richest milk of all, and given bears’ unusual gestation, they’ve been nursing since almost before they were born.

When it comes to pregnancy, giving birth and nursing, bears are remarkable. Wildlife biologist Sean Farley has raised bear cubs and studied their needs – and their mothers’ ability to satisfy those needs. He’s actually milked bears, measured milk production and milk intake by nursing bears, and identified how the nutritional compostion of milk changes during the cub’s first year.

Bear cubs are born in winter and the mother bear nurses them as they are hibernating.

“That she can lactate while not eating or drinking is pretty phenomenal – nobody else does that,” Farley said. “Everything comes from what she’s got stored in her body. We thought it would be significant nutritional drain on her to nurse while hibernating”

That proved to not be the case, Farley said.

“What we found was interesting. The largest nutritional cost comes when she’s first out of the den in the spring – right about now – and there’s not a lot to eat. The cubs need to grow fast. Their metabolic rate is lot higher than it was in the den, they’re out and moving around.”

Bears mate in the spring, but the fertilized eggs do not immediately begin developing into bear embroyos. Instead, the fertilized eggs suspends development until the fall. It is believed that sometime around the beginning of hibernation the eggs implant into the uterine wall. It’s counter-intuitive – just as the mother bear stops eating and begins to slow down for hibernation, the eggs within her begin growing into cub embryos.

Some other animals, such as weasels and bats, are capable of delayed implantation. But they use it to avoid the demands of pregnancy during the lean months of winter.

“Most hibernating animals aren’t pregnant,” said wildlife biologist John Hechtel. “But an adult female goes into the den pregnant. She’s pregnant, gives birth and lactates all in the den.”

The cub is born after just a few months of development in the mother’s womb. The cubs eyes are closed and can do little more than nurse and yelp. The tiny bear cubs are just a fraction of one percent the mother bear’s weight, compared to an eight-pound human baby is about seven percent the weight of a 120-pound mother.

“It’s almost an external pregnancy – the cub is born and then migrates to the teats and nurses,” Hechtel said. “The size of the cub in the spring when it comes out of den is closer to what you’d expect to see at birth.”

Farley said it’s almost as if they are born premature. “They don’t look like the cubs you see when they come out of den.”

A first-time mother bear usually has just a single cub, and with subsequent pregnancies generally will have twins. Nutrition plays a key role in litter size.

A mother bear has six nipples. The newborn cub (or cubs) crawls to the nipples closest to her pelvis to nurse. Later, as the cubs get older, they nurse from the top four and the mother often “switches off” production in the bottom two.

At birth a black bear cub is about three-quarters of a pound, and when they emerge from the den black bear cubs average about six pounds. Brown bear cubs are about twice that weight at each stage.

From birth to den emergence about 150 days later, cubs consume only about nine percent of their total yearly milk intake. Milk production and intake increases four-fold after they emerge from the den. As might be expected, the cubs also have a growth spurt their first summer.

“At about 180 days, cub growth takes off like a rocket,” Farley said.

The peak lactation occurs over the next few weeks, in June and July. At peak lactation a black bear cub consumes about 30 ounces of milk a day, and a brown bear cub takes about 45 ounces. That’s per cub, so a mom with a litter of two or three cubs could be producing three or four quarts per day – a difficult metabolic feat to sustain.

Farley has raised cubs from birth to a couple years old, and said they get really aggressive when they’re nursing.

“They’d like to nurse a lot more than she can produce,” he said. “If you’re bottle feeding a cub, as you run out of milk you need to walk away. They get wild and bite. Sometimes you see the mother bears are pretty chewed up.” 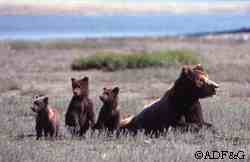 A mother bear with a litter of two or three cubs could be producing three or four quarts of milk per day – a difficult metabolic feat to sustain.

At one point when bear researcher LaVern Beier was helping Farley with his work he took the opportunity to taste bear milk.

“It was sweet, like that Eagle brand canned condensed milk,” he said.

Farley emphasized that the nutritional compositon and value of mik will change considerably depending on how long the mother has been lactating.. Nutrients include carbohydrates protein, lipids, water, and what’s referred to as the ash or mineral content. The carbohydrates, protein, and lipids all combine to produce the calories used by cubs.

As the cub grows during its first summer, its nutritional needs outpace the mother’s ability to produce.

“After that accelerated growth, later in summer, she can’t produce enough milk to meet the nutritional demands of a growing litter of cubs.” Farley said. “She needs to provide external food for the now 20-pound cub(s), plus she needs to put on weight for upcoming hibernation. It’s a nutritional ballet.”

She provides less and less milk to the cub or cubs, but she’s a long way from weaning them.

“She’ll nurse them for a couple years,” Farley said. “There are a couple schools of thought regarding that – extended lactation provides a strong behavioral bond between mom and cub, which allows her to keep them close, protect, them, and train them. The other possibility is that there may be some critical micronutrients or fatty acids produced in the milk, even though milk production is low. I suspect the behavioral bond more important.”

Riley Woodford is a writer with the Division of Wildlife Conservation at the Alaska Department of Fish and Game. He is the editor of Alaska Fish and Wildlife News and the producer of the “Sounds Wild” radio program.