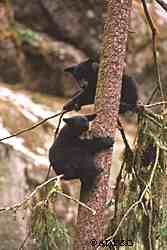 Animals that appear to be “orphaned” may not be orphaned at all; their mothers may be hunting, browsing, or only a short distance away, but hidden from sight. Female black bears will often run cubs up trees while they hunt or fish. ADF&G photo.

Wild animals belong in the wild. But every spring, the Alaska Department of Fish and Game is called to deal with “orphaned” baby animals.

Wildlife managers appreciate that people want to help animals, but in most cases human intervention does not help. People are advised to leave animals alone.

There are many reasons not to pick up an animal. Animals that appear to be “orphaned” may not be orphaned at all; their mothers may be hunting, browsing, or only a short distance away but hidden from sight. For example, female black bears will often run cubs up trees while they hunt or fish.

Even when an animal truly is orphaned, it’s best not to interfere. There is a common misconception that wild animals can be placed in zoos. In truth, there are very few placements available. Big game animals can live for many years in captivity – up to 20 or 30 years for bears. This means the department must make sure that a zoo is capable of providing a healthy and safe environment for the animal over the long term. Verifying that a placement is suitable is an involved and time-consuming process.

Interfering with a wild animal by capturing or feeding it can create a problem where none actually exists. At best it dooms a wild animal to a life in captivity; at worst, it can lead to the animal being euthanized. Biologists understand that it may be distressing to see a wild animal that seems to be orphaned or in trouble. But an animal in jeopardy in sight of people is no different than an animal in jeopardy out in the woods. Mortality is a part of life in the wild, and animals are added to and subtracted from populations every day.

Another reason to leave wild animals alone is that it is illegal to possess live game animals, including orphans. A person who picks up an animal, even with the best of intentions, will be issued a $250 citation and prosecuted. Criminal charges may be pursued (as a class A misdemeanor) in the event of a more problematic situation, such as someone keeping a wild animal as a pet.

Dealing with an “orphaned” animal is time consuming and expensive for the state. Dealing with individual animals pulls wildlife managers away from the big picture of managing populations of wildlife, and is not the best use of state resources.

People are welcome to call their local Alaska Department of Fish and Game office if they have questions about wildlife or an animal that appears to be orphaned.

Karen Blejwas is a wildlife biologist with the Alaska Department of Fish and Game, based in Juneau.