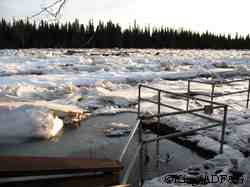 Many angler access structures from Swiftwater Campground to the mouth of the Kenai River were wiped out when a lake that feeds Skilak Lake forced thousands of tons of water and ice down river in the winter of 2006. Mary King photo.

Structures at Soldotna Creek, Swiftwater Campground, Centennial Campground, and Cunningham Park were destroyed by large chunks of ice. In addition to public property, millions of dollars in private structures were also destroyed.

Many of the angler access structures – the boardwalks and stairways – from Swiftwater Campground down to the mouth of the river were wiped out when a lake that leads into Skilak Lake forced thousands of tons of water and ice down river in the winter of 2006.

The flooding and ice jams were caused by rising waters triggered by a release of the Skilak Glacier dammed lake. This rise in water caused the ice cover on the lower Kenai to break up and form ice jams. 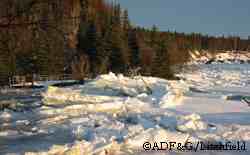 Even though the spring thaw has allowed a large group of concerned citizens and agencies to rebuild, some shore fishing access in the Soldotna area for the early part of the 2007 fishing season may not be repaired until July.

“The City’s plans to have 95 percent of our river access stairs in the Soldotna area ready by July 1 are on schedule, and the new stairs at Soldotna Creek have already been put back into place and await use by anglers,” says Andrew Carmichael of the City of Soldotna.

Some areas were spared – Bing’s Landing, Morgan’s Landing, and the Pillars boat ramp were unaffected. 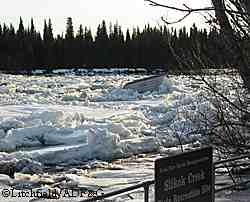 Ice damage on the Kenai River. Photo by Ginny Litchfield.

As many of the structures as possible will be salvaged from the river, but boaters should be aware of the increased debris and take extra caution this year. Anglers may also find extra tackle-eating snags in all their favorite fishing holes and drifts.

The Division will make every effort to keep the fishing and boating public know of rebuilt access sites as they open. Check the weekly fishing updates posted on the web and recorded into the telephone hotlines.

Lisa Olson is an information officer with the Division of Sport Fish, at the Alaska Department of Fish and Game.