Rocky Nights
The Secretive Life of the Flying Squirrel 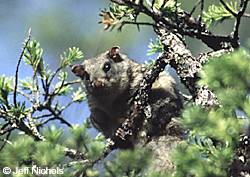 A northern flying squirrel peers from a perch in a tree on Prince of Wales Island. These nocturnal gliders are widespread in Alaska and range from Ketchikan to Fairbanks. Jeff Nichols photo.

When thinking about the old cartoon favorite, The Adventures of Rocky and Bullwinkle, most Alaskans can easily identify with the bulbous-nosed, antlered member of the duo. After all, the moose is a pretty high-profile critter in these parts.

Members of the largest subspecies of moose in the world, Alces alces gigas, are abundant on Alaska’s roadsides, landscapes, and dinner tables. Maybe Rocky, the squirrel never got his due because he was the straight man, sensible and smart, and despite exceptional aeronautical skills his 16 ounces of flesh were no match for Bullwinkle’s ton of humor. Rocky was less popular, too, because he was unbelievable. Squirrels can’t fly, can they?

Alaska is home to one of two North American species of flying squirrels; the northern flying squirrel (Glaucomys sabrinus). The range of this squirrel extends from the boreal forests of Alaska, south to central California and east across Canada and the northern United States.

My first encounter with a flying squirrel was on the Chena River 25 miles upriver from Fairbanks. I kept a well-stocked feeder just outside my glass door where I spent many enjoyable winter hours watching spunky chickadees, downy and hairy woodpeckers, and pine grosbeaks gorge themselves on the free food. The antics of these hardy Alaskans served as a living television for my two golden retrievers. Though the birds were entertaining, the dogs were far more inspired by the bold red squirrel that became accustomed to feeding just four inches from quivering noses and slathering jowls.

December days are short, so the feeder experienced a flurry of activity between dawn and dusk, only a matter of about four hours in interior Alaska. The songbirds and resident red squirrel would disappear from the feeder with the waning light of afternoon. Yet, Griz, the older of the two dogs, began to stand and stare out into the darkness long past dusk. I found his actions amusing; convinced he was being tricked by his reflection in the glass. Griz paid no mind to my laughter at his expense. He conducted his evening vigils as if he were a clairvoyant mesmerized by apparitions of woodland sprites and ghostly nymphs.

One evening I knelt next to the gray-muzzled canine and stared through the pane with an intensity that matched his own. My eyes strained and my legs cramped, but the waiting was rewarded. Griz had been watching sprites and nymphs! One sailed out of the darkness, landed with a gentle thump on the deck railing and skittered to the feeder. This flying squirrel lacked the cap and goggles of his famous TV cousin, but still managed to display his remaining flight-enabling equipment in all its glory.

As the squirrel at my feeder stretched to reach a sunflower seed, a baggy skin flap became apparent. The patagium extended from the wrist of the foreleg to the ankle of the hind leg. The looseness of the skin gave the appearance of a skinny, old man in a rumpled robe a few sizes too large. The patagia are the “wings” that allow the flying squirrel to glide through the air.

The squirrel surveyed us with large round eyes. These enormous orbs have incredible light-gathering capabilities that allow the squirrel to live a crepuscular life (most active at dawn and dusk).

The squirrel flicked its thick, flat tail. Covered in short, dense fur, the flying squirrel tail lacks the trademark wispiness of other squirrel species. This is a tail with a purpose. It functions as a stabilizer, rudder, aileron or flap, as well as a tool to snap away pesky flies, bees, and mosquitoes.

As we watched, the squirrel wrinkled its nose, undulating the long whiskers that serve to alert it to hazardously close objects during flight.

Though real-world flying squirrels cannot fly like the gravity-defying TV species, they are expert gliders: The average glide ratio of the northern flying squirrel is 3-to-1. That is, for every 3 feet it travels horizontally, the squirrel drops 1 foot in altitude.

The flying squirrel’s eyes lie far back on the sides of its head, providing excellent peripheral vision. Wide-set eyes enable animals to detect their predators more easily, but present a problem in executing flight, since depth perception is sacrificed for the wider field of view. To see three-dimensionally, the visual field from each eye must overlap if you close one eye, you can get a feeling for the flattened world in which the flying squirrel and other prey animals live. Flying squirrels overcome their perceptual handicap by using triangulation.

Before making an unfamiliar glide, a squirrel bobs its head from side to side and up and down. Sometimes it takes a step to one side to consider the desired landing spot and the glide path necessary to reach it. By its actions, the squirrel perceives a three-dimensional image from a two-dimensional view. The flying squirrel can then judge the distance and make an accurate glide.

This northern flying squirrel, released after being live-trapped on Prince of Wales Island, sports an ear tag. Photo by Jeff Nichols

Once a squirrel plots a glide path, it crouches low and jumps. When airborne, it extends fore and aft legs, just like a kid emulating Superman. The patagia are spread taut like the wings of a glider. The squirrel executes turns by dipping one shoulder or the other depending on desired heading. This turn-and-bank ability permits it to weave around obstacles and avoid or confuse predators. The tail assists in making turns and creating lift or drag depending on its position. Just before contacting its target tree trunk, the flying squirrel pulls back its head and tail, and curls the patagia to form a parachute. All of these actions result in a light upward swoop, bleeding off some speed and finishing with a near perfect four point landing.

The squirrel at my feeder catapulted off the deck railing to a nearby spruce without any head bobbing. Once a glide path is established, sailing from one familiar spruce to another requires no preparation. The squirrel quickly learns how much power to put into the take-off, the correct attitude to assume, and just the right degree to dip a shoulder in order to nail the landing with the precision and accuracy that would elicit envy from even the most seasoned Alaska bush pilot.

Flying squirrels accustomed to established glide paths literally leap before they look. Illar Muul, a zoologist and flying squirrel expert, once removed an old snag from his study area. One of his subjects attempted to alight on the non-existent tree four times before being convinced the favored landing spot was no longer there.

In Alaska, forests with large spruce and old balsam poplar are the flying squirrels’ stomping grounds. Dead snags riddled with woodpecker holes are desirable, as well as living trees with a cavity or two for nesting and resting. The flying squirrel is most vulnerable to predation when on the ground so brush piles are a welcome haven to fleeing squirrels. All the characteristics of the old forest that your local fire department urges you to clear from around your house are exactly the sort of habitat in which the flying squirrel thrives.

In this environment, Rocky eats insects, the buds of various plants, takes the occasional bird egg or nestling, and licks sap from tree wounds, but northern flying squirrels are primarily mycophagists (fungi-eaters).

Flying squirrels often choose witches’ brooms as winter nests. Witches’ brooms are abnormally thick growths of spruce branches caused by an infection of the tree by rust fungi. The flying squirrel lines these tufts with, of all things, one of its favorite food items-lichen. This is akin to you deciding that pizza and hot dog buns make excellent mattress stuffing and dandy insulation for walls, floors, and ceilings.

I watched the squirrel at my feeder glide once again from the deck railing to a balsam poplar about 20 feet away. Immediately after landing, the squirrel scurried around to the opposite side of the tree and clambered up the trunk. This behavior may help the squirrel escape the grasp of any predator that may have been witness to its glide. Lynx, martens, goshawks, great-horned and great gray owls all find flying squirrels to be tasty little morsels.

Given predation, parasites and the hazards of flying, it is no wonder the life expectancy of a wild flying squirrel is rarely more than four years.

You will never forget your first flying squirrel sighting. If you are like me, that first encounter leaves a longing for more. Dusk is here. Enormous eyes, loose skin, long whiskers, and exceptional tails will soon visit the feeder outside my window. I will be there waiting.

Nancy Sisinyak is an information officer with the sport fish division at the Alaska Department of Fish and Game.