Moose in the Fairbanks area 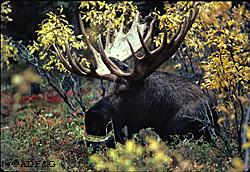 Game Management Unit (20) near Fairbanks is extremely productive and accounts for about 30 percent of the entire Alaska moose harvest.

In the 1970s, moose numbers in the area immediately south of Fairbanks were just a fraction of what they are today. The population has increased ten-fold in the past 30 years.

The recovery of this population is a success story for wildlife managers and good news for moose hunters. It highlights the combination of factors that work together to benefit this important game animal. But although the numbers are high, the moose are showing signs of nutritional stress, and biologists are working to address the cause.

The moose population in the Fairbanks area (Unit 20A) dropped from about 23,000 in about 1970 to just 2,800 in 1975. A series of severe winters, increased predation, and an ill-timed liberal harvest contributed to the steep decline. But that population has improved significantly in recent years. The population in 20A is now estimated to be about 16,000 animals, and the population objective (before hunting season) is 10,000 to 12,000 animals.

“We probably have the highest moose densities in the state, and it’s a success in providing hunting opportunities and harvest,” said Fairbanks wildlife biologist Don Young. “More than 1,000 moose have been harvested in 20A for the third year in a row.”

The entire Game Management Unit (20) is extremely productive and accounts for about 30 percent of the entire Alaska moose harvest. Antlerless hunts have been instituted in two of the four subunits in Unit 20. The use of antlerless hunts to keep the moose herd form exceeding its habitat - and still keep the sex ratios at an acceptable balance – is an important aspect of the management work in the area. But replicating this success in other areas of the state is not so simple.

“It’s not realistic to simply export this to other areas,” said wildlife biologist Tom Paragi. “We have a very good mix of vegetation, low snow depth, and there is very good access to the area for hunters and trappers and they keep the predator population down. This is not Fish and Game managed predator control, it’s just good predator management through harvest.”

One of the reasons moose are doing well in 20A is because the area does not get as much snow as other parts of Alaska. 20A is in the “snow shadow” of the Alaska Range. In McGrath and many other areas of the state, it’s a very different story. In other areas, especially Western Alaska, snow is deep and persistent. 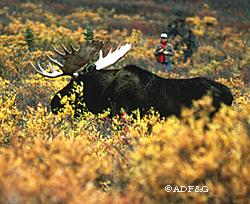 Wildlife watchers as well as hunters enjoy moose in Alaska.

A combination of factors set the stage for the high numbers of moose in the area in the 1960s. A 700,000 acre fire in the early 1940s created excellent habitat for moose, habitat that could support a large moose population at high density. This, along with very effective predator control by the federal government in the 1950s, strongly contributed to the big spike in the moose population in the 1960s.

After the decline in the early 1970s, moose numbers began to rise again. Predator control in the late 1970s and early 1980s, conducted by agency staff using helicopters and radio-collared wolves, was quite effective. These days, wolf harvest by the public is high enough to limit the wolf population to levels that reduce their predation on moose. Wildlife managers in the area are focusing on improving the habitat. Moose in 20A are showing signs of nutritional stress, and improving the habitat will address this.

“The area has seen three or four decades of fire suppression, and the lack of fire has affected the habitat,” Young said.

The lush regrowth of willows and other vegetation following wildland fire is extremely beneficial to moose. Land managers have planned a controlled fire, called a prescribed burn, in the area since 1996, with the aim of enhancing moose forage. But such endeavors are expensive and difficult to execute, especially near populated areas, and managers have not been able to set the prescribed burn.

A combination of environmental conditions and intensive management have contributed to the abundance of moose in Unit 20A, and Fish and Game is continuing to work to maintain the availability of moose in the area.

Riley Woodford is a writer with the Division of Wildlife Conservation at the Alaska Department of Fish and Game, and serves as editor of Alaska Wildlife News.