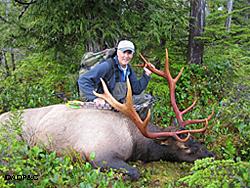 This nice elk was taken on Etolin Island by Rick Swisher in the fall of 2006. Photo by Nick Gefre.

The Alaska Dept of Fish and Game is looking for your best hunting photographs for the 2007-2008 Alaska Hunting Regulations. The deadline for entries is March 1, 2007.

Photos of hunters and their game are good, but images that depict all aspects of hunting are encouraged. Daily life in camp, animals in the field, scenery, game processing and images that show the diversity of our hunting population are especially appreciated.

Fish and Game is also interested in using photos in other Wildlife Conservation publications. All photographs submitted are reviewed by a committee, and the final number of images selected is determined by the amount of space available in each publication. 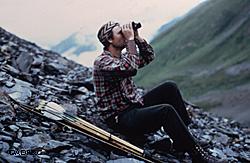 Fish and Game would images that depict all aspects of hunting. Daily life in camp, animals in the field, scenery, game processing and images that show the diversity of our hunting population.

Each photo submitted should include the following information:

Written permission from the photographer for ADF&G to use the photo in their publications must be provided (photographer will be credited whenever possible).

Name(s) of anyone shown in the photo, and age(s) if under 21 years old.

Identify the Game Management Unit and area where the hunt took place, the hunt date, method of take, and name of the person who took the animal. A brief description of the hunt is great for the photo caption. (See current hunting regulations book for examples of photo captions.) 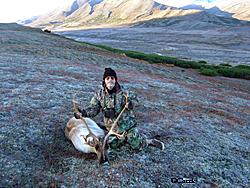 Mel Cheek with his first caribou. This photo was featured in the 2005-2006 hunting regulations.

If you want your photo(s) returned by mail, include a self-addressed, stamped envelope with adequate postage. Photos will be returned no later than June 1, 2007.