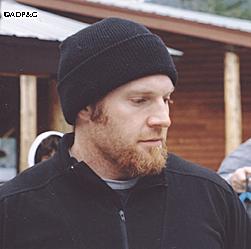 Grant Hilderbrand is the Wildlife Conservation supervisor for Region II, headquartered in Anchorage.

This March, the Board of Game returns to Anchorage for its biennial Southcentral Alaska meeting. One of the more contentious issues that commonly arises at Southcentral meetings is the management of brown bears in and around the McNeil River State Game Sanctuary. Proposals typically range from significant increases in lands available to hunting to major hunting restrictions as well as a variety of other minor changes in local bear management. This year will be no exception.

Due to highly productive ecosystems and sound management, the Alaska Peninsula supports healthy and productive brown bear populations. This region provides world-class opportunity to bear hunters and wildlife viewers alike. Thus, the controversies that arise at each southcentral meeting hinge on political, philosophical, economic, and allocative issues rather than biological concerns.

The pattern of land ownership, designated boundaries, and geographically defined regulations have no significant biological meaning to bears as they commonly move between these areas as dictated by their natural history. Many bears use several of these different areas within a single season.

Two of the specific areas that will be addressed at the upcoming Board of Game meeting are the Kamishak Special Use Area (including the Douglas River) and portions of the Katmai National Preserve. The Douglas River region has been closed to brown bear hunting for more than two decades.

At the March 2005 meeting, the Board of Game re-opened the area to hunting effective in the Fall of 2007, thus allowing an additional board cycle for public comment. There are several proposals at the upcoming meeting to reverse the Board’s decision (i.e. keep the Douglas River region closed). The department plans to support these proposals, thus maintaining the status quo.

In recent years, brown bear harvest has increased significantly in the northeast portion of Katmai National Preserve. Record high sockeye salmon returns attracted more bears than normal to this region and both bear hunters and viewers have utilized this increasing opportunity. While harvests have increased in some of the local drainages, we are not concerned about harvest levels on a Game Management Unit or Subunit scale. The complexity of management in the Preserve relates to how to manage a population of bears that move freely throughout a large area, but is perceived as a distinct sub-population by some members of the public. Furthermore, the bear viewing industry is growing and values viewing bears in unhunted areas. 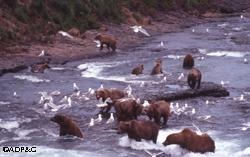 Dynamic variations in bear distribution across the landscape in response to changes in salmon availability are a natural and expected phenomenon. Such changes in distribution should not necessarily be interpreted as real or significant changes in population trend or health and, thus, should have little impact on management decisions. We will advise the board on the biological implications of modification to season dates within Katmai National Preserve but will not support a full closure of bear hunting in the area.

In March of 2005, the Board of Game reviewed all of the state’s special use areas including the McNeil River State Game Refuge and Sanctuary. In response to the Board’s review and a need within the department to clarify policies related to permitting activities, revision of the McNeil River State Game Refuge and State Game Sanctuary Management Plan was initiated. This ongoing public process has been led by the Division of Sport Fish and has provided opportunity for public and agency comments on our current management practices including the Special Area Permit program. The public review draft will be available this spring and the final plan will be adopted through the commissioner’s office later this year.

Due to the review of special use areas at the March 2005 meeting, the Board of Game received thousands of public comments relative to bear hunting in the McNeil River State Game Sanctuary and Refuge. There are no proposals for the upcoming meeting that would specifically allow for brown bear hunting in the Refuge. There are proposals to impose further restriction in these areas but these proposals will not be supported by the department.

ADF&G’s goal is to provide sound biological information and guidance to the Board of Game as it wrestles with the issues raised by the public. In the case of brown bear management in and around the McNeil River State Game Sanctuary, we are proud of our sound history of providing outstanding opportunities for all users through our existing management strategies and plan to support few, if any, changes to the management strategies and regulations we have employed over the past decades.

For more on McNeil, see:

Grant Hilderbrand is the Wildlife Conservation supervisor for Region II, headquartered in Anchorage. He has a Ph.D. in zoology and has done extensive brown bear research on the Kenai Peninsula.