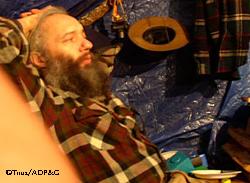 A researcher with the Alaska Department of Fish and Game, Beier has handled almost 800 bears in his career. He has some stories to tell after 35 years of snaring, darting and capturing bears.

Not all the hazards he’s faced are bear or helicopter-related. A devil’s club thorn once pierced his eye, sending him to the hospital. Another time a bear's small premolar tooth shattered as he pulled it, sending a tooth shard into his other eye. It became infected, and he was forced to fly to Juneau for treatment at the emergency room. The doctors were incredulous.

“I told them I had a bear tooth in my eye and they looked at me like I had three heads,” he said.

Beier darts bears as he leans out of a helicopter – shooting a moving target from a moving aircraft. He is also skilled at setting foot snares on bear trails; he then darts the snared bear. Occasionally he “free ranges” a bear, essentially hunting it with the dart gun. These are mostly brown bears, or grizzly bears as they are called outside coastal Alaska.

Titus now serves as deputy director of the Division of Wildlife Conservation at Fish and Game. He worked closely with Beier on research projects on Admiralty and Chichagof Islands throughout the late 1980s and 1990s. Titus said he respects Beier’s conservation ethic and his tremendous compassion for bears – as well as his practical skills.

“I appreciated the fact we could get radio collars on bears under very dangerous situations as safely as possible, both for bears and humans,” Titus said. “With LaVern, you had somebody in the woods you were confident was always watching over his shoulder and not daydreaming.”

Titus said tagging bears from helicopters in mountainous terrain, or in the dense brush along salmon streams, is dangerous in different ways.

“On a salmon stream, you are down in the bear’s element,” he said. “There’s no technological advantage, you are on their level. In a helicopter, you have the technological advantage, but you’re flying around up there in a bag of bolts – hoping it doesn’t come apart, that the pilot doesn’t crash, and that the rotor blades don’t touch a hemlock tree.”

That's pretty much what happened when Beier's helicopter went down in the early 1990s. He was capturing goats in the steep country north of Juneau when the rotor hit the mountainside and shattered. The aircraft fell on to a ledge and miraculously did not tumble down the mountain. The helicopter was destroyed, Beier's partner broke his leg, but everyone survived.

Much of Beier’s work involves equipping bears with GPS tracking collars, a 45-minute process that includes tagging and measuring the animals and taking hair and blood samples. The process provides valuable information for researchers and wildlife managers.

Beier hasn't shaved in 30 years, and his bushy beard can be an ironic contrast to his name. He and Titus have presented at conferences and co-authored papers and reports as Kimberly Titus and LaVern Beier. Beier said it's been clear when they showed up to speak that audiences had pictured a very different "Kimberly and LaVern." 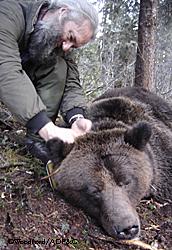 Beier lives in Juneau in Aurora Harbor. His floating home is the Sultana, a spotless refurbished 65-foot Bristol Bay “monkey boat” that tended sail-powered gillnetters in the territorial days. Rumor has it you can eat off the Atlas engine.

Beier grew up on a pheasant farm in Wisconsin. “I pretty much raised myself,” he said. “My mom died when I was 5, and I did all the cooking for the family. I almost became a chef. I would have, if things had worked a little different.”

In 1970, as Beier approached his 18th birthday, he expected to be drafted in the U.S. Army and sent to Southeast Asia. His brother had made a career of the Navy and Beier heard they had the best cooking school, so he figured he’d join up. That summer he headed to Petersburg, Alaska, to visit his sister and brother-in-law. He fell in love with Southeast Alaska and decided to stay. As luck would have it, he drew a high number and gave up cooking school for life in the north.

He spent the next few winters living in the woods, trapping marten, mink and other furbearers. It was break-even financially, but he loved the lifestyle. He learned about tracking and traps, wolves and bears, and he soaked up Alaska history first hand from old-timers he befriended.

One winter the temperature hit 26 below and the ocean froze, and he watched two moose walk across Thomas Bay. He decided to try it, so he cut a long pole for safety and set out on the rubbery sea ice. Another time he tracked a wounded wolverine for miles through the melting spring snow until it disappeared in hole in a massive root wad halfway up a mountain. He was soaking wet – except for his boxers – so he set his underwear on fire and stuffed it into the hole to smoke the wolverine out.

Over the years he worked as a fishing and hunting guide, on boats, and as a seasonal worker for Fish and Game. Beier said that Petersburg game biologist Harry Merriam hired him off the street in 1975 because of his association with Juneau Master Guide Karl Lane, and pioneer and guide Bruce Johnstone. Lane and Merriam were also prominent Southeast Alaska conservationists, work which also impressed and influenced Beier.

Bruce Johnstone was Beier’s first mentor in Alaska, one of several long and fruitful associations with seasoned old-timers. Johnstone began prospecting for gold in the Unuk River country north of Ketchikan in the 1930s, and gained some renown for surviving an attack by a legendary bear known as, “Old Groaner, the moaning marauder of Cripple Creek.”

"Bruce Johnstone was more likely better known as the only man alive who had survived the attack of three brown bears at one time, also on the Unuk River," Beier said. "When I first met Bruce he was 62 and on crutches and I was 17."

Johnstone favored isolated living, but he was getting on when he met Beier in the early 1970s. He needed help with his trapline and guiding work, and he introduced the teenager to the Unuk River country. Beier was attacked by a brown bear in 1973 when he and Johnstone were trapping together on the Unuk River. It made a big impression, but did not discourage him from working in bear country. 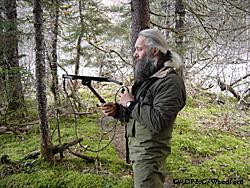 Beier's extensive knowledge of bears, wildlife and Southeast Alaska was gained over the years by living where bears live and studying the nuances and subtleties of their signs and behavior. He was not educated as a wildlife biologist. Beier learned pharmacology, GIS mapping and telemetry on the job.

Beier may be the most avid bear trapper in Alaska, and he releases his catch. On a recent trapping expedition in the Berners Bay area north of Juneau, he caught seven bears in a little more than a week, including a recapture of an animal he caught earlier in the spring. It was late October and early November, the first time he’s trapped in late fall with snow on the ground. A brown bear can add 30 percent of its body weight over the summer, and the 600-pounder he caught in June was pushing 900 pounds after five months gorging on salmon and berries.

Beier set foot snares along a stream teeming with a late-season run of coho salmon. Tracks of wolverine and mink were interspersed with the bears’, and Beier quickly assessed the number, size and nature of the animals using different stretches of the stream. He looked for two things when setting his snares – fresh sign, and a spot where he could direct a bear to place its foot. He carefully arranged brush and logs to subtly manipulate the bears’ pace and footing. He was meticulous about not leaving scent, and virtually indiscriminant about how the sets looked.

“You think a bear would step in that?” he asked, pointing to a 16-inch loop of steel cable in the middle of the trail, carefully propped up by a nest of sticks and carved splints. “I used to camouflage them, but sometimes the leaves and stuff got caught up in the snare and caused problems. So I gradually started getting away from it and it didn’t seem to matter, as long as I was real careful about the scent.”

Scent didn’t matter at the Hoonah dump. Beier did some snaring there in the 1990s, but it was free-ranging bears that Titus remembers most vividly.

“We caught a lot of bears at the Hoonah dump,” Titus said. “Almost all were over 700 or 800 pounds. If you weighed 400 pounds, you just didn’t go there. It was dominated by big males.”

The Hoonah dump represented a tremendous opportunity to efficiently and inexpensively radio collar a number of bears. Instead of spending $700 an hour for a helicopter, they could drive a pickup truck to the dump at night in the summer and find a half-dozen bears at once. In the middle of the night, when no one was around, they could observe the bears, load their darts with immobilizing drugs, and then move in.

“We’d have the darts all loaded up in our shirt pockets and go in with dart guns and do rapid-fire free ranging, using the headlights and flashlights,” Titus said. “In the course of 30 or 40 seconds we’d dart four of five bears.”

Beier plans to write a book when he retires, chronicling his adventures with bears. An avid photographer, he’s documented his work over the past decades. He was recently featured in a National Geographic documentary, but the day will come when Beier tells his own story of a life with bears.

Riley Woodford is a writer with the Division of Wildlife Conservation, and the editor of Alaska Fish and Wildlife News. He spent a week snaring bears with Beier in 2006.