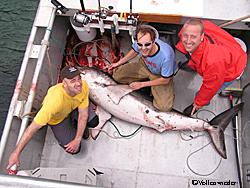 Ed Neal and friends with the seven-foot salmon shark. They took turns bringing the shark in, which took about two hours.

Reflecting on a successful salmon-shark fishing expedition outside Icy Strait, J.J. Vollenweider adds “I kind of doubt I’d do it again.”

One of the most powerful and aggressive of all sharks, they tend to range from six to nine feet long and weight between 250 and 400 pounds. Salmon shark’s endothermic physiology makes them faster and more agile in cold water than other sharks. Keeping up this warm internal temperature is metabolically costly; salmon sharks need to eat about 8% of their weight in food each day. By contrast, a salmon or herring eats 2–3% of its body weight in food per day.

Salmon sharks are found in the coastal and ocean waters of the North Pacific, including the waters off Japan, off the western Pacific coasts of North and South Korea, Russia, and in the Bering Sea. They are often brought up in commercial salmon fisheries as bycatch, and are considered a nuisance and thus discarded.

Earlier this summer, Vollenweider, Ed Neal, and two friends put together their own salmon shark expedition. “We were looking for something different, a new adventure,” Vollenweider said. She grew up in Juneau, and enjoys fishing for salmon and halibut and now works for NOAA. She and her boyfriend Neal, who is with the USGS, researched salmon shark charters in Prince William Sound and rounded up the necessary gear. They talked with commercial fishermen working off Icy Strait who reported lots of sharks in the area, so on July 9, they set off in a 24-foot custom aluminum boat.

Their day started uneventfully enough, heading out Icy Strait and keeping contact with some trollers. After about an hour some of the fishermen reported catching some sharks on their lines near Yakobi Island. Heading in that direction, seasickness overtook one friend, and while hanging over the side of the boat looking at the horizon, he spotted a shark. 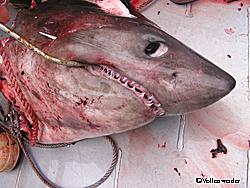 “We immediately dumped some bloody chum over the side that we got from a processor, let the bait skim the surface and then the clicker started ticking away. Everyone looked at each other in disbelief,” Vollenweider said.

Working in shifts, the four friends brought in the shark in just under 2 hours. “We took 15 to 20 minute turns reeling it in, even the one who was seasick,” Vollenweider said. “We kept the boat moving along next to it, trying to keep up. Almost all the line was gone. I think we wore it out. It was so docile it was almost dead at that point.”

The group used halibut rods and lever drag reels filled with 550 yards of 50 pound monofilament line attached to a 12 foot wire leader with a 12/0 gamakatsu hook. A commercially-caught pink salmon was used for bait.

A veteran salmon shark charter operator out of Seward, Captain Bob Candopoulos, who owns the Saltwater Safari Company, has his clients wear a harness with a crew member stationed behind them to prevent them from going over or being crushed against the side of the boat. The shark is restrained with gaffs and shot before being brought aboard. He charges $4000.00 a day.

For reeling in their shark, Vollenweider and her friends used one of those belts with a metal rod that can be pressed against the abdomen. After exhausting the shark, they brought it alongside the boat. They bled it with halibut spears for about 45 minutes. When they were certain it was dead, they hauled it aboard using their own strength. 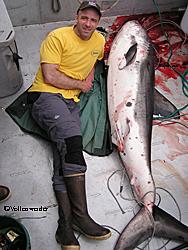 The shark is longer than Ed Neal is tall. The group spent several hours carefully butchering and processing the firm, pale meat. All photos by JJ Vollenweider.

“We had to haul it up with the grain of the skin; against the skin was too hard. Even so, it was very difficult and took all of us,” she said.

The female shark was about as long as the boat was wide, about 7 feet. Vollenweider estimates the weight at between 300 and 350 pounds. “The liver was huge -- about 3 feet long,” she said.

Salmon sharks have unusually large livers, a necessity for maintaining their high internal body temperature and fueling their strength and speed. According to Lee Hulbert with ADF&G, a salmon shark that has spent the summer gorging on salmon can have most of its body cavity filled with liver.

“The teeth were pretty small too; the largest was probably about this big,” she said, indicating about ½ inch length with her fingers. “But there were five to seven rows of them,” she added.

“The jaw was surprisingly small too. If we stretched it, you could just barely get your head in,” she said. I must have looked alarmed. She explained, “we saved the jaw and did this later, after the trip.”

Because of shark skin’s high urea content, sharks must be bled and processed immediately or the meat will spoil. Vollenweider estimates it took about 2 hours for her and her friends to processed the shark. They saved some meat to eat fresh and vacuum sealed and froze the rest, including the fins. “We want to try shark fin soup for the new year.”

The sportfish bag limit for salmon sharks is 1 per day, or 2 per year.

Amy Carroll is a writer and publications specialist with the division of commercial fisheries at the Alaska Department of Fish and Game. She has previously written articles about shark research and sleeper sharks.