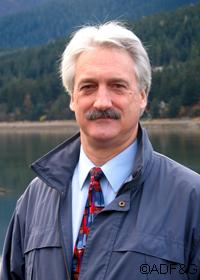 Denby Lloyd, director of Commercial Fisheries for the Alaska Department of Fish and Game.

For Alaskans it begins right in our constitution. “Fish…belonging to the State…shall be utilized, developed, and maintained on the sustained yield principle,” and like all other natural resources, “…for the maximum benefit of its people.” The fight for Alaska’s statehood was centered on the need to rebuild Pacific salmon runs and to protect fishermen and communities along our lengthy coastline. Fifty years later we enjoy record-setting harvests and, for the most part, continued social and economic vitality supported by these wonderful fish.

Fishermen, processors, managers, researchers and even politicians in Alaska tend to share a common view that puts the health of our fishery resources first. We rarely argue over the need to allow annual salmon escapements to pass unmolested to their spawning grounds, or to maintain sufficient biomass of groundfish and shellfish to produce future recruitment.

We’ve also taken difficult steps to protect the health of the seafood industry, through various forms of effort control, and we’ve implemented innovative programs to protect the interests of coastal communities in the resources surrounding them. We have a strong record of designing these programs with broad public participation, through the Alaska Board of Fisheries and the North Pacific Fishery Management Council.

Indeed much has been made, locally and nationally, of Alaska’s fishery management. Along with a reasonable measure of pride, however, sometimes creeps an uncomfortable degree of self-congratulation. Often we give insufficient credit, for example, to the favorable environmental conditions that have promoted decades of strong salmon returns, or to the fact that our groundfish fisheries are relatively new and uncomplicated compared to others around the country.

Perhaps the most important advantage we enjoy in Alaska is a short modern history. Much of our habitat is still pristine and productive. And, as our fisheries have developed, there has been an abundance of prior history from more exploited parts of the world against which we can evaluate our management proposals. We have been able to learn from people’s mistakes.

But that advantage can be all too quickly lost.

There are readily apparent difficulties in deriving maximum sustainable yields from more than one neighboring stock of fish at a time. There is growing concern that we are eliminating older aged and more fecund fish in our pursuit of large harvests. And there is no assurance that heavily fished populations provide sufficient prey for their natural predators. Almost thirty years ago a notable fishery scientist wrote an “epitaph for the concept of maximum sustained yield;” recently the topic has been revisited by another scientist of note in a view on “the sustainability myth.” Yet MSY stands as a pillar of our state and national fishery policies. This poses an interesting conundrum for the emerging pursuit of ecosystem-based fishery management.

In establishing large-scale IFQ and other types of rationalized fisheries, we’ve reaped the benefits of longer seasons, more precise quota management, and the ability of fishermen to better choose their most effective means of harvest. On the other hand, we’ve helped give away the value of those public resources, altered important subtleties in leverage between harvesters and processors, and not fully recognized that communities have legitimate interests in the disposition of fish in their areas.

Policymakers will need to grapple with evermore sophisticated mechanisms for the distribution of social and economic benefits. Managers and scientists will need to continually assess the comfortable fiction of MSY in the context of ecosystem function. We all will need to keep in mind the public’s rights of ownership while limiting access to the resource among various users.

But, just what is it that we are trying to sustain? It is certainly not just yield. It is not just the fish themselves. We are promoting possibilities for human endeavor: the opportunity to catch fish, to eat fish, to be financially and culturally enriched by these resources, to enjoy the benefits of healthy ecosystems. In this regard, Alaska’s constitutional framers had it right, using seemingly simple and innocuous language: fish…sustained yield…maximum benefit…people. So long as we learn our lessons well, restrain ourselves from the temptations of overharvest, and wisely share the benefits of these resources, fisheries can far into the future sustain many of our livings and our ways of life.

In the end, perhaps all we need do is sustain an appropriate attitude: to avoid complacency, to challenge our assumptions, to evaluate the consequences of our actions.

Denby Lloyd is currently serving a second stint as Director of Commercial Fisheries for the Alaska Department of Fish and Game. He’s previously worked for the Alaska Governor’s Office, the Aleutians East Borough, and the North Pacific Fishery Management Council. Soon he will return home to Kodiak to manage a fishery research laboratory.