How Old is That Fish?
Determining the Age of Dolly Varden 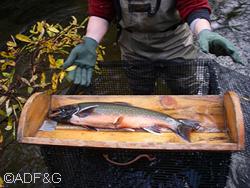 Most Dolly Varden are thought to live about 6 or 7 years, and some have been “aged” up to 11 years. This fish is about to be released.

Have you ever caught a large fish and wondered how old it was? Determining the age of a fish is important to biologists who manage fish, but in recent years, the scientists have found that the methods they use to age fish are not always accurate.

Biologists with the Alaska Department of Fish and Game recently launched a long-term study to find the best method to determine the age of Dolly Varden. This fall, the first phase of this project began with the collection and fertilization of Dolly Varden eggs. These are now being incubated at the National Marine Fisheries Service Auke Creek hatchery in Juneau, and the fish that hatch next spring will help scientists accurately “age” Dolly Varden.

The question of how to determine the age of fish has plagued fish biologists for a long time. Fish scales provide some clues. The first documented use of scales was in 1898 to estimate the age of carp, and is still the preferred method to determine the age of many species of fish. However, many fish do not have scales, or have scales that do not have recognizable annuli (annual patterns). For these fish, alternate hard parts such as fin-rays or otoliths (one of three paired bony structures in the inner ear of fish) are often used to determine their age. In Alaska, otoliths have been the preferred method to age Dolly Varden since the 1960s. However, the accuracy of ages determined from this method has not been verified. In recent years, the methods used to age many fish have been shown to be inaccurate. For instance, arctic grayling in Northwest Alaska thought to be 10 to 12 years of age -using scales to determine age - have recently been shown to be well in excess of 20 years of age. 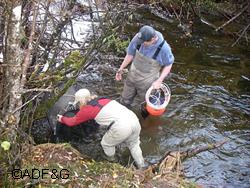 Biologists with the Alaska Department of Fish and Game recently launched a long-term study to find the best method to determine the age of Dolly Varden. This fall, the first phase of this project began with the collection and fertilization of eggs.

The first phase of this age-validation study was to develop a known-age population of Dolly Varden that can be sampled over time to collect otoliths and fin-rays for aging purposes. Division of Sport Fish personnel captured mature Dolly Varden along the Juneau road system during October 2006. Thirty-one fish (19 females and 12 males) were live-spawned to obtain approximately 22,000 fertilized eggs. Because Dolly Varden can spawn more than once during their lifetime, adults were released at their capture site after spawning. The eggs will be incubated at the Auke Creek hatchery over the winter and the fry will be released into the Auke Lake drainage during the summer of 2007. These fry will be marked with a thermal mark while in the incubator (a process of alternating cold and warmer water which leaves a distinctive pattern on the otoliths). They will be marked externally by clipping the adipose fin.

Dolly Varden will be captured at the Auke Creek weir as they migrate out to sea over the next several years. The fish from this study will be identified at the weir by the clipped adipose fin. About 10 to 20 of these fish will be sampled each year to obtain fin-rays and otoliths from known-age fish. We expect to continue sampling known-age fish through at least 2016 to complete Phase 2 of the study.

The third and final phase of the study will compare the “age” of each sample determined by several readers with the known-age of the fish. The results of this study will go a long way toward improving the methods we use to age Dolly Varden. If successful, this information will provide a key needed to manage Dolly Varden populations in Alaska for sustained yield.

So next time you catch a Dolly Varden, take time to ponder just how old it is. We hope to be able to answer that question definitively in the future.