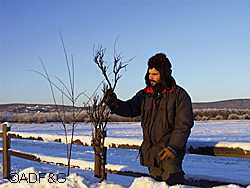 Fairbanks area wildlife biologist Tom Seaton with a “broomed” willow showing the stubby twigs and chaotic branching that occurs with heavy browsing by moose. The plant next to it is unbrowsed. ADF&G photo.

Managing Alaska’s moose populations requires more than understanding moose. Moose habitat – and the factors that influence how moose use their habitat – are also important. Wildlife biologist Tom Paragi of the Alaska Department of Fish and Game is assessing moose habitat in Alaska and is developing new tools to help wildlife managers and the public understand habitat capability for moose in the Interior.

From his base in Fairbanks, Paragi is outlining the suite of habitat factors that affect moose populations, and he’s working with several colleagues to develop a system to share the information. Geographic Information Systems (GIS) technology provides powerful tools for scientists to analyze information, and a good way to produce informative maps of habitat features important to moose, such as vegetation type (especially browse production), snow depth in winter, fire history, and quality of forage.

“With GIS, you can examine multiple habitat components and see how they differ from one Game Management Unit to the next,” he said. “It gives us a spatial context to habitat in addition to information on herd condition, such as twinning rate. The combination helps us gauge how much room exists for a population to grow and whether predation or habitat is more likely to be a limiting factor that we might address with management actions, such as predator control or habitat enhancement.”

This approach has benefits to wildlife managers in parts of the state where a high level of consumptive use for big game species has been designated by the Alaska Board of Game.

“When a proposal is made to apply (the 1994 law on) Intensive Management to their area, we can examine the different factors that would affect moose in that area and put that area in context with areas where we have a longer history of information from research studies,” Paragi said.

Both summer and winter habitat play a role in overall health of a moose herd. High quality summer forage, particularly near wetlands, allows nursing cows to regain body condition and calves to grow so they can escape predators (particularly bears) and survive their first winter. In surviving the winter on browse that is much less nutritious than summer forage, moose often lose weight. Their constant struggle in winter is to minimize energy loss by feeding in areas of abundant browse while avoiding wolves. Snow depth and its duration play a key role in defining areas of winter range.

Although moose can deal with deeper snow than deer and elk, the energetic cost of wading through snow to reach forage means that moose face similar restrictions to forage access in parts of Alaska. Moose can be really hurting in late winter, when they are running out of easily-accessible food and the first green plants are still a month or more away. When snow depth exceeds about 30 inches, moose become more selective in the habitats they use. When snow is more than about 36 inches deep, moose tend to avoid the area or concentrate foraging on sites where dense browse allows them to maximize intake of food energy in relation to how much they burn by dealing with snow. 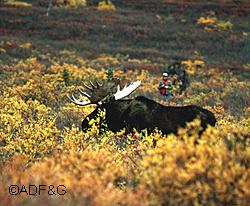 One of the reasons moose are doing well in the area south of Fairbanks (Game Management Unit 20A) is because the areas does not get as much snow as other parts of Alaska. The area is in the northern “shadow” of the Alaska Range and gets less snow from coastal storms. In McGrath and many other areas of the state closer to the coast, it’s a whole different story. In other areas, especially western Alaska, snow is deep and often persists into spring.

“We’re also looking at mapping other factors related to climate change,” Paragi said. “One thing people often don’t consider is that interior Alaska may begin to experience more frequent freezing and thawing events in winter than in recorded history”

Weather events can have a profound affect on wildlife, especially moose, wolves, and caribou. Thawing in winter, inevitably followed by freezing, causes an ice crust to form on the snow cover. Caribou may not have much trouble pawing through snow to reach the lichens they eat in winter, but pawing through a crust of ice is far more difficult. A tough crust of ice can also significantly hinder moose, making travel far more problematic – and that same crust can be a tremendous benefit to wolves. A crust of ice that will support a wolf enables the wolf to travel and hunt far more effectively, creating a situation where the prey animals are handicapped and the predators are aided.

Paragi said the flood regime is another factor. Big floods scour the riverbanks, gravel bars and areas adjacent to the river and deposit silt for primary succession to begin. Moose thrive on the willows and other plants that quickly regenerate after scouring floods. Some big floods in western Alaska in the 1960s created vast areas of good habitat that really benefited moose in the 1970s, but without recurring disturbance, willows in those areas are maturing beyond the reach of moose.

Floods and fires alter habitat in ways that may benefit moose for many years. Other factors that affect moose, such as predation and related predator control, tend to operate on the population differently.

“Predator and prey cycles are very fast, whereas the effects of disturbance events on habitat go on for decades,” Paragi said.

Managing wildlife requires balancing the short-term and long-term factors that affect wildlife. This balance is particularly critical with public controversy over Intensive Management.

“It’s an orchestrated dance for managers to coordinate the slow habitat changes and the fast changes of predator-prey systems and hunters to maintain abundant wildlife.” said Cathy Harms, an information officer with Fish and Game in Fairbanks.

Riley Woodford is a writer with the Division of Wildlife Conservation at the Alaska Department of Fish and Game, and serves as editor of Alaska Wildlife News.