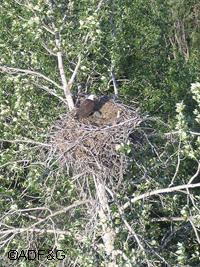 It’s a pretty specific window of time; in the spring, before leaf out, with no snow on the trees but still snow on the ground, and preferably snow remaining in the bowl of the nest. Those are the parameters for counting raptor (birds of prey) stick nests from the seat of a low flying Supercub. And it works!

Over the past couple of years Alaska Department of Fish and Game nongame biologist Jack Whitman and Interior Refuges Manager Jason Caikoski have teamed up on a study in the Minto Flats State Game Refuge. The refuge, about 35 miles west of Fairbanks, encompasses close to 500,000 acres of diverse habitat. Whitman and Caikoski are developing a technique to inventory and monitor stick-nesting raptors. They’re also compiling field data that has never been recorded about birds of prey on the refuge.

What started as a proposal to inventory osprey and bald eagle nesting sites on Minto Flats quickly changed, “Once we saw what was out there,” says Whitman. What they saw was a lot more than osprey and eagle nests, so they expanded the project to include all stick-nesting raptors, including great gray owls, great horned owls, northern goshawks, red-tailed hawks, rough-legged hawks, and also peregrine falcons and common ravens. There are other raptors on the refuge such as boreal owls, northern harriers and kestrels, but they are not stick nesters and therefore not in the study.

According to Caikoski, not much is known about non-game species on the Minto Flats State Game Refuge. The refuge and adjacent lands are a heavily used area with the potential for natural resource exploration and development, logging and supersonic military overflights – all which have potential to impact the ecosystem.

Raptors are an apex predator at the top of the food chain, and they are an indicator of ecosystem health. And the only way to know what raptor populations are doing is to have baseline data and a method of inventorying and monitoring their status in the future.

With the help of biologist Kalin Kellie and statistician CiCi Chen, the pair adapted a geospatial population estimate technique for the raptor nest survey. This technique is used to estimate unevenly spaced animals; things that are clumped in certain areas and not evenly distributed across the landscape. It is currently used by the Alaska Department of Fish and Game for moose population estimates. 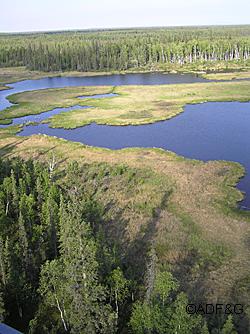 Flying an aerial survey of the Minto Flats State Game Refuge. The refuge, about 35 miles west of Fairbanks, encompasses close to 500,000 acres of diverse habitat.

To start, they broke the 500,000-acre area into a grid system of 188 survey units, with each unit measuring about 5.5 square miles. Then they randomly selected 100 of these units to sample by flying over the unit and counting actual stick nests from low flying aircraft. That is why there is such a small window of time to fly the surveys. In order to have the best chance at seeing the nests from an airplane the conditions have to be just right. Snow on the ground and in the bowl of the nest make them stand out – if you know what you are looking for.

The team returned with a helicopter later in the spring and visited all the nests they sighted to determine if they were being used, if there were young in the nest, and to classify the nest structure and habitat type.

After returning for another count in 2006, they were able to develop a sightability factor – how many nests were they actually observing on their fly over counts, compared to what was actually there. It turned out that they had a 71 percent nest detection rate, and from that they developed a sightability correction factor to more accurately estimate the number of nests in the study area.

What did they find?

Whitman, who has studied raptors in many boreal forest areas, was surprised at the results. “When we went out there my initial thoughts were that we would find 50 platforms (stick nests),” he said. They actually classified 270 different nests and when the statistical estimate was applied for the entire study area there were more than 400 raptor stick nests estimated on the refuge! Whitman says that this is high compared to other boreal forest areas. The reason, he believes, is that Minto Flats State Game Refuge contains a wide variety of habitats. “Practically every boreal forest habitat type exists on the refuge; black spruce stands, white spruce stands, mixed forests, rivers, lakes, bogs, etcetera,” said Whitman. Diverse habitat equals diverse wildlife species. 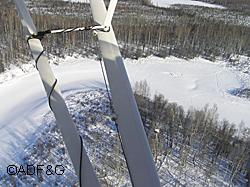 Raptor nests stand out in winter, with snow in the bowl of the stick nest and no leaves to obscure the nest.

The number of nests does not necessarily equal the number of nesting raptors.
The actual use of the stick nests was calculated and it varied greatly in the two years. In 2005 the nest occupancy rate was approximately 60 percent, while in 2006 the nest occupancy rate was more in the area of 38 percent. This annual variation can be expected based on changes in prey species, such as voles and shrews, and other environmental factors.

One of the most unique things Whitman noticed during the two years of the study was an occupancy rate change between great gray and great horned owls (which feed heavily on shrews and voles) and northern goshawks (which feed primarily on hares and grouse). In the first year of the study there was a high occupancy rate of great horned and great gray owls and a low number of goshawks. There was also an explosion of voles that year. The next year, when shrew and vole numbers were way down and grouse and hare numbers were on the rise, there was a clear shift; the owl occupancy rate went down and the goshawk occupancy rate went up.

Caikoski said the importance of obtaining baseline data cannot be understated. “We went into an area where we knew nothing, and now we have something to start from”. While the team will return in the spring of 2007 to have another look at occupancy rates there are no immediate plans to continue with a monitoring program. “Projects are time and money driven,” Whitman said. “Right now we can’t do a long term project out there.”

“Our primary quest was satisfied,” Whitman said. “We came up with a technique to inventory and potentially monitor raptors in the future. More importantly, this methodology can be used throughout the boreal forest to monitor raptor populations.”

Mike Taras is an educator with the Alaska Department of Fish and Game, based in Fairbanks.