Wayne Regelin is the deputy commissioner of the Department of Fish and Game.

The Local Fish and Game Advisory Committee system is an essential part of the Board of Fisheries and Board of Game process. It provides an effective mechanism for citizen involvement in the fish and game regulatory process.

The Joint Board has decided to take a look at restructuring the Advisory Committee system to make it more effective and efficient. They are currently accepting proposals and have expressed a desire to evaluate and consider options to consolidate advisory committees:

1. Where multiple committees represent the same geographic area or share in the use of the same fish stocks or game populations.
2. Where committees have been inactive for several years.
3. Where a change in committee structure would help resolve issues at a local level before coming to the boards. 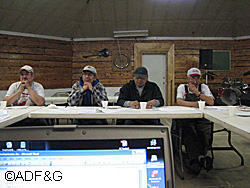 An advisory committee provides citizen involvement in the fish and game regulatory process.

The goal of the Joint Board is to make the system more effective in representing local views to the boards, and to provide a more efficient and less costly system to administer.

They have informed all advisory committees of their plans to discuss changes and have provided a long period of time for advisory committees and others to submit proposals for consideration. They have also asked the Department of Fish and Game to suggest potential changes.

The deadline for proposals is December 8, 2006. These proposals will be published and distributed in January of 2007.

The Joint Board will not meet to discuss these proposals until October, 2007. This provides a lot of time for local communities and advisory committees to discuss, evaluate, and prepare testimony on the proposals

Information and proposal forms may be obtained from any office of the Boards Support Section or on their website at http://www.adfg.alaska.gov/index.cfm?adfg=process.main