One Bear, Two Bears, Three Bears…
Counting Bears You Can Not See 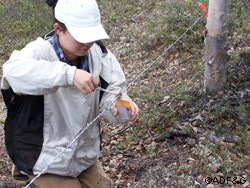 Fish and Game statistician CiCi Chen "captures" an Interior grizzly bear by collecting a sample of hair snagged in a hair snare. Photo by Al Keech.

Al Keech slung the shotgun over his shoulder as he strolled through the woods towards the grizzly bear lure site. I stayed close, trying to make noise as we approached the blood-and-fish soaked lure. I knew hundreds of these sites had been checked over the summer without any encounters with bears but still, it was a grizzly bear lure site, and it was the first I was checking.

It wasn’t bears we were looking for, but evidence of bears. “We got one,” I said to Keech, peering at the clump of grizzly hair stuck to the hair snare – a strand of barbed wire encircling the lure.

Estimating bear numbers is no easy task. They can’t be counted like moose, which are active all year and are relatively easy to see from an airplane when snow covers the ground.
Bears are almost impossible to count accurately from an airplane in wooded country, as they often spend the daylight hours in thick cover. In the winter, when they would stand out against the snow, they are hidden away in their dens hibernating.

With these challenges Fish and Game biologist Craig Gardner set out to design a bear population estimate in the 40-mile country north of Tok and west of Chicken. This area is part of ongoing Intensive Management efforts to increase moose and caribou numbers and managers wanted more data on the grizzly bear population in the area. Working with a limited budget and limited staff, Gardner’s task was to determine how many bears are living in an area almost 3,000 square miles.

The hair snare is an ideal tool for this kind of study. The hair follicle contains the animal’s DNA, and “capturing” a bit of hair can be the key to answering the population question.

Gardner started his study design by breaking the area into 106 cells. Each seven-square kilometer cell contained a lure site and a hair snare. The hair snare is a 70-to-90-foot long, single strand of barbed wire stapled to trees 19.5 inches off the ground, forming a ring of barbed wire about 20 feet in diameter. Three quarts of a reeking mixture of fermented fish and rotten cow blood is poured onto a pile of debris in the center. In addition, a piece of cloth is dipped in the concoction and raised up a tree. A different scent attractant is also dabbed on a nearby tree to help broadcast the lure as far and wide as possible.

Under our research permit we attracted bears using lure and not bait. Our study was conducted partially outside of legal bear baiting season but we followed regulations governing where the sites were placed in relation to roads, residences, etc. It is important to note this is a bear lure site, not a bear bait site. There is nothing to hold the bears at the location, no food, the idea is just get them in there to investigate and to snag some hair on the barbed wire. 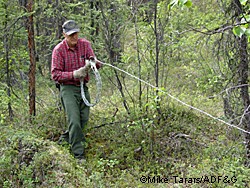 The lure sites are left for 14 days before they are checked. Most of the sites in the rugged and remote 40-mile country were laid out and checked by helicopter and ATV, a few by hiking in from the highway. There were four, 14 day sampling sessions, with a hair snag trap in each cell for all sessions, totaling 212 snag sites and 424 site checks all together for the project.

Gardner spent a year researching, designing and preparing for the project – and some of the work was exceptionally disgusting. Filling barrels with fish and tending them as they rotted over the year, seeking out gallons and gallons of cow blood to create the lure concoction, and filling hundreds of three-quart containers for easy transport in the field. He also had to recruit help, test methods, line up helicopters, airplanes and fuel drops, and train people to set the hair snares and collect hair samples.

Field days were long and physically demanding. ADF&G wildlife technician Brad Wendling worked on the project all summer, traveling to field sites in helicopters and ATVs. Wendling has worked on other bear hair snare projects in Montana and loves the work.

“The worst part was smelling the bait, and the inherent effects of working with barbed wire,” he said.

He saw only one bear all summer. “I thought working on a bear project I’d see a lot more bears,” he said. Given that, he was also surprised at how many ‘hits’ they had at the lure sites. “The bears are out there, you just can’t see them.”

How do hair samples lead to a bear population estimate? First of all, each hair sample from different barbs (even if they are close together) is collected, recorded and put in a small envelope. This is meticulous work that involves plucking the hairs from the barb, pushing them into a small envelope, recording the site data, and documenting the exact barb number. Fish and Game statistician CiCi Chen worked in the field on the project, and will also analyze the data. She recalled one rainy-day site visit where she forgot her raincoat and she ended up collecting 40 samples from the site. Needless to say she was there for a long time and got very wet. 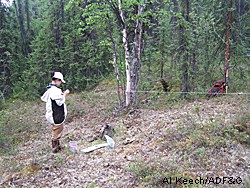 CiCi Chen records information at a bear lure site in the 40-mile country north of Tok. Photo by Al Keech

The hair samples are all sent to a lab where DNA testing will identify the species of bear (black or grizzly), their sex, and distinguish separate individuals.

The DNA information combined with the repeated systematic sampling of the grid system (known as a capture-mark-recapture method) will allow a statistical analysis to estimate the number of bears in the area.

Capture-mark-recapture is a common method of estimating populations of animals that are difficult to see. You start by capturing an unknown proportion of the animals in an area population, marking them and releasing them. The hair snares and DNA identification serve this function, sparing biologists the expensive and difficulty of actually capturing and handling a large number of bears.

The bear lure sites were checked four times, to increase accuracy of the estimate and to account for other variables such as seasonal movement and behavior of the bears.

Fish and Game biologist Kalin Kellie assisted Gardner on the summer-long project, managing the data logistics and collection. She said this is a new technique applied on a large scale. “If it works it may become a fairly standard technique for counting bears in the Interior,” she said.

Everyone connected to the project has their unscientific ‘guesstimate’ about how many grizzlies are roaming the study area, ranging from about 80 up to 135. Everyone will have to wait to find out the magic number, however. The DNA analysis won’t be completed until the bears are deep in midwinter slumber. Chen will then do the statistical analysis and the population number will be revealed.

Mike Taras is an education and outreach specialist for ADF&G in Region III, and is based in Fairbanks.