Was that a Bear or a Moose?
Examining the Evidence 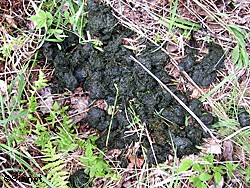 Bear scat is pretty distinctive, but sometimes moose scat can be mistaken for bear scat. Photo by Rick Sinnott

Every spring and summer, Jessy Coltrane braces herself for the poop calls.

Some agitated callers want Coltrane, the Alaska Department of Fish and Game assistant area biologist for Anchorage, to come out and take a look. They are certain a bear created the big plop in their yard or near their house.

Coltrane, whose work focuses largely on urban wildlife management, has learned to begin conversations by tactfully asking: “Did you realize that moose poop sometimes looks like a wet patty instead of nuggets?”

Not everyone knows that. But it’s true: Moose poop changes shape and consistency at the end of winter.

Coltrane estimates she gets 50 or so calls on the subject from Anchorage area residents annually. And that doesn’t include all the other calls that go to other biologists and to the general help desk at Fish and Game.

“It’s not that I don’t care but I don’t have time to look at all the poo in people’s yards,” Coltrane said. “There are so many other calls with actual animals involved that need responding to at the same time.”

In lieu of driving out for a professional look, Coltrane offers callers a few self-help tips to help them differentiate between bear and moose scat.

Color can be deceiving, she said. While bear scat is generally darker, moose poop can range in color from green to brown to black.

Coltrane suggests examining the fecal material with a stick. Because moose are ruminants – meaning they chew their food and then regurgitate it and chew it again – their feces typically appears uniform in both color and consistency.

Bears, on the other hand, have a digestive tract that is more similar to humans. If humans eat corn, corn comes out the other end. Likewise, if bears eat grass, birdseed, or berries, unprocessed bits of those foods show up in the scat.

Bear poop often looks fibrous, particularly in the spring when bears are eating a lot of grass. Coltrane added that it’s particularly telling that bear scat found around Anchorage often contains birdseed – a bear attractant that should be put away in summer. 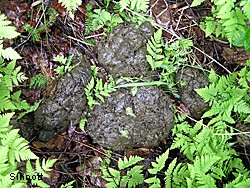 Moose scat is not always the stereotypical "nuggets."

Why moose poop changes from season to season has to do with what they eat, how much water they drink and how their stomachs work.

In spring, around green-up, the moose switch temporarily to fresh grass and then to new-growth leaves that are more digestible and contain more water. As a result, moose feces range from completely loose to a cow patty look to large, lumpy turds.

Coltrane compared the sudden change to a person who had not eaten a green thing in a year and then consumed only salads and spinach. The result might not be pretty.

A moose also takes time to adjust to new foods because of the bacteria they rely on for digestion. The animal’s four-chambered stomach acts like a mini-factory, fermenting the plants and pulling the nitrogen out. Nitrogen feeds bacteria in a moose’s gut, and the moose digests the bacteria.

Adjusting the bacteria in a moose’s rumen (the first chamber of its stomach) to efficiently digest what the animal is eating takes from 14 to 18 days, according to Lohuis.

Coltrane and Lohuis said you do see some moose poop in pellet form in the summer but more typical is the looser style of feces. Ultimately, the consistency of the poop depends on what the moose is eating.

Coltrane jokingly blames all the moose nugget novelty items for fixing a single image of pelletized moose poop in the public’s mind. “It’s those darn swizzle sticks and all those earrings,” she said, laughing.

Her advice: Next time, don’t pick up the phone. Pick up a stick and take a look.

Elizabeth Manning is a writer and wildlife educator with the Alaska Department of Fish and Game. She can be reached at 267-2168 or at elizabeth.manning@alaska.gov.