Watchin’ Them Dam Salmon Run
The Life of a Fish Counter

King salmon make their way up the Chena River through Fairbanks each July. Though the run is substantial as Interior Alaska waterways go, it does not compare to the more coastal runs on larger systems. Where runs are very large, sonar is used to count salmon and estimate run strength. On the tributaries of the Tanana River (Chena, Salcha, Chatanika), however, king salmon are counted by fish technicians, commonly known as “fish counters.” Cheaper than sonar and easier to maintain, fish counters are usually college students trying to keep their heads above water and make it to the next student loan.

Many years ago, I was one of those student fish counters. I would stand upon the Moose Creek Flood Control Dam over the Chena River and count the kings that sailed silently across the white panels that we had laid across the river bottom. The panels helped us see fish through murky water and let us identify whether we were counting a king or a chum salmon.

Counting on the Chena River was sweet duty. We parked a tiny tow-behind camper atop the dam for shelter from stormy weather. During the day, between 20-minute counts, there were visitors to talk with. Folks from all over the country – and the world – were interested in what we were doing up there with our heads hanging over the railing, tally whackers in hand. It made this fish tech feel downright important and proud of her job. The dam was quiet and secure with locked gates at both ends from 10 at night until eight in the morning. Yup, the Chena River counting station sure beat Salcha River duty where we stood on the shoulder of the Salcha River Bridge as cars, campers, and semis whizzed by at 70 miles an hour, barely two feet behind our backs – the occcupants often thinking it great fun to yell things as they went by: “Get a real job!” “Don’t jump!” “Jump!” or just plain, “#@!*^” It was unnerving enough at 3 o’clock on a Tuesday afternoon, and just plain terrifying at 3 o’clock on a Saturday morning when a good percentage of the drivers were escorting Jim Beam, Jack Daniels, or Captain Morgan. Nowadays, fish counters work the Salcha River from a counting tower upstream of the bridge – no more near death experiences, real or perceived.

A few nights counting on the Salcha River made a fish tech think she died and went to heaven when working the Chena River. We counted around the clock, three shifts each day; 20 minutes out of each hour were spent straining our eyes looking for fish. The day shift and the night shift were pretty good duty. Like I said, there were people to talk to and some office work to accomplish between counts. The graveyard shift, however, was a bit more challenging. The goal was to keep yourself busy and occupied, in order to be awake for the next count. This is a difficult thing to do when you are working alone, at a time when you are usually asleep and the air is cool and breezy and the current of the Chena River lapping against the dam and shore is begging you to succumb to the call of zzzzzzzzz.

We were inventive. We kept a log to communicate with each of the other shift workers. Someone would make copies of the same crossword puzzle and we would all see who did it in the fastest time. One counter would challenge the other two to a contest on who could spot the most wildlife during their shift. We would walk laps around the top of the dam…I got really skinny that year. One time it got downright dangerous. Someone brought in a giant bowl full of grapes. In the log was stated, “I fit 16 grapes in my mouth at one time.” I took up the challenge and managed 17. At that point I nearly aspirated one of the red seedless variety. Headlines flashed before my eyes, “Fish Counter Dies on Moose Creek Dam – Chokes on Grape.” Not exactly the way I envisioned meeting my maker. 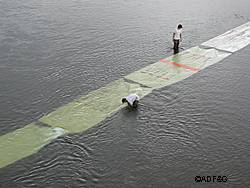 It was after that incident that I decided I was going to try my hand at writing; keep a journal of sorts of observations, thoughts, solutions to world woes … I filled a good-sized notebook that last year as a fish counter. I came across it recently in a box of goodies buried beneath a pile of dead shoes in the far reaches of the bedroom closet. Most of it is meaningless ramblings, but the following attempt at poetry brought back a flood of memories of my summers spent counting. It also reminded me that the circle continues this July, with a new wave of fish counters and the offspring of salmon counted by fish techs long moved on.

The Graveyard Shift on the Moose Creek Dam

The mist rolls in across the land,
devouring all in its grip.
The sun is down. The moon is up,
and the air begins to nip.

Hanging my head over the dam,
I watch the panels flap.
My breath begins to quicken
at the sound of a beaver’s slap.

The eerie stillness sends a chill
all up and down my spine.
It’s the graveyard shift on the Moose Creek Dam
and the time is three-oh-nine.

The silted fields of canvas white
glow below the water,
as I lazily wander through the mind
of my father’s youngest daughter.

When ghostly forms cruise on by,
cloaked in shrouds of red.
I count the apparitions before my eyes,
while ignoring those in my head.

The swimming dead is what they are;
just bags of bone and mush.
Yet for the corpses that they are,
they’re in a hurried rush.

Driven by some mystical force;
made to venture further.
Many fall along the way
to fish wheels, bears, and murder.

This spell that they are under;
a possession of great power;
befalls at some time all who live
from man to fish to flower.

But the salmon pays a heavy price
for the right to procreate.
Sure death awaits each one of them
yet they do not deviate.

On they go, mile by mile;
past lure and net and bait.
And all the while the flesh and bone
will disintegrate.

The spirit is the driving force;
a will beyond all reason.
Each one knew its time had come
in this summer season.

I marvel at their stamina
and at their drive to spawn;
even if they are
some greater being’s pawn.

For what they do before they die
gives my heart a pounder.
Making me wish I were the fish
and not the lonely counter.