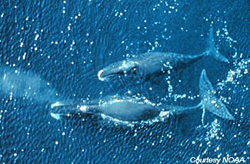 On May 12, a team of scientists near Barrow, Alaska, equipped a 45-foot-long bowhead whale with a satellite transmitter. Just one month later the bowhead had moved about 1,000 miles east, through the Beaufort Sea into Canadian waters. The whale, known by its transmitter number as 60010, is already providing biologists with valuable information on the movement and migration of bowheads.

Marine mammal biologist Lori Quakenbush with the Alaska Department of Fish and Game said that although the tagged whale is in an area known to be used by bowheads in the summer, researchers were surprised at how quickly it got there and how far offshore its migration route was. On June 12, the bowhead was in Canadian waters between Banks Island and Victoria Island, about 300 miles due north of Yellowknife, in the Northwest Territories.

Bowheads are the most important subsistence animal, both culturally and nutritionally, for most northwestern Alaska coastal Native people. Because of this significance, and because of their expertise and experience with bowheads, the Alaska Eskimo Whaling Commission and the Whaling Captain's Associations of the whaling villages are cooperators on this study, along with the Alaska Department of Fish and Game and the North Slope Borough. The five-year study is funded by the Minerals Management Service.

Bowhead whales spend their entire lives near sea ice and do not migrate to temperate or tropical waters to calve. Bowheads are well adapted for living in Arctic and subarctic waters—they have very thick blubber, up to 1½ feet, which is used for insulation, food storage, and padding, and heavy bone structure in their skulls for breaking ice.

Historically, the distribution of bowhead whales was almost circumpolar in the northern hemisphere, but commercial whalers seriously depleted bowheads throughout their range. For management purposes, five stocks (geographically distinct segments of the population) are currently recognized. Bowhead 60010 is a member of the western Arctic stock, sometimes referred to as the Bering Sea stock. This is by far the largest of the five stocks, representing perhaps 90 percent of the entire world bowhead population. It is estimated to be more than 10,000 animals and growing.

Researchers hope that satellite telemetry will help them to better understand the population structure – the different stocks. The effect of offshore and nearshore oil and gas activities on bowhead whales is also a concern. Such activities may deflect whales away from shore, making hunting more difficult and dangerous. It may also displace whales from feeding areas and may cause oil spills that would affect migrating bowheads. More information is needed regarding migration routes, migration timing, feeding areas, diving behavior, and the time spent in areas within spring and summer range. As it is currently understood, the western Arctic stock of bowhead whales follows a 3,600 mile migration route. They winter in the Bering Sea at the edge of the pack ice and in polynyas, areas of consistently open water within pack ice. During late March and April, they move north through the Bering Strait as the pack ice retreats. Most bowheads follow leads, or cracks, in the ice through the Chukchi Sea along the Alaska coast to Point Barrow.

Whale 60010 is following the anticipated route, but is offering a few surprises, as Quakenbush noted.

She said the transmitters and the attachment method were developed by Mads Peter Heide-Jorgensen and Mikkel Jensen of the Greenland Institute of Natural Resources. “They have been putting transmitters on bowhead whales in Greenland and Canada. Mikkel has developed an airgun that is powered by pressurized air from a SCUBA tank. The transmitter is placed inside a rocket that has fins for a controlled trajectory. The rocket falls away once the transmitter contacts the whale.”

The transmitter implants itself in the whale’s skin upon contact. The transmitter, which weighs 240 grams (8.5 ounces), is a cylinder about 11 inches long with about 8 ½ inches under the skin in the blubber and 2 ½ inches outside the skin with an antenna on top of that. There is a cutting head on the bottom and barbs on the body of the cylinder to slow the transmitter from working its way out. When the whale surfaces for air, the transmitter sends a signal noting the time and location.

A skin sample was also taken that will be used for DNA analysis to determine the sex of the whale.

Quakenbush said an attempt was made to equip a second whale with a transmitter as well. “We deployed another tag, #60012, that appeared to attach low on the right side of the whale instead of the more preferred location high on the back. We thought we might hear from it occasionally, but have not heard from it at all.”