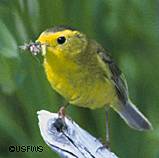 Two eye-catching, bright yellow birds spend summers in Alaska, Wilson’s warbler and the yellow warbler. This seems to be a banner year for these distinctive, beautiful little birds.

These chickadee-sized warblers are easy to identify. Wilson’s warbler has olive-green wings and back, and the face, breast and underparts are yellow. The yellow is eye-catching, even when the birds are on the wing or flitting about the branches of the willow and alder trees they favor. The male has a distinct black cap on the top of his head, and the female has an olive-colored crown or cap.

The yellow warbler has also arrived in Alaska in recent weeks for mating, nesting and chick-raising. Slightly larger than Wilson’s warbler, the male yellow warbler is yellow overall, with reddish streaks on the breast and underparts. The females have yellowish-olive backs and wings, with yellow bars on the wings.

Both the yellow warbler and Wilson’s warbler eat lots of insects. They’ll glean bugs and caterpillars from branches and foliage, and make short flights from a perch to snag flying insects, a behavior called hawking. They seldom sit still. The Wilson’s is especially twitchy, often flicking its tail and wings.

These warblers are neotropical migrants. The ‘neo’ identifies them as birds of the ‘New world,’ North and South America. In a sense, these are really tropical birds that spend a few months in Alaska, taking advantage of the summer abundance of insects and nesting opportunities. They may spend a month or so in transit each way during migration, and a few months here in summer, but most of their lives are spent in lush tropical rain forests in Mexico and Central America.

In late May, they are establishing territories and courting mates. In early June they’ll begin nesting and laying eggs, and in late June they’ll be caring for their young hatchlings. If nest predators take the first clutch of eggs or if the hatchlings perish in late spring, the birds will continue nesting to mid-summer. Successful parents may raise a second clutch in July.

As the name warbler implies, these are vocal songbirds. It’s not hard to identify and learn their songs. Knowing the song and recognizing it reinforces just how abundant these warblers are in summer. The yellow warbler song is a bouncy and musical, “Sweet, sweet, I’m so sweet.” The song of Wilson’s warbler is a sort of a musical “chee chee chee.”

Wilson’s warbler is named for (and named by) Alexander Wilson, the father of American ornithology. Wilson, Scottish immigrant and self-taught naturalist, traveled throughout the Eastern and Southern United States, studying and documenting birds. Between 1808 and his death at age 47 in 1813 Wilson wrote, illustrated and published nine volumes of “American Ornithology; or The Natural History of the Birds of the United States.” On one of his many walkabouts, Wilson met and likely inspired a younger, up-and-coming naturalist and illustrator named Audubon in Kentucky in 1810.

A recording of Wilson’s Warbler can be heard at: http://audubon.sonoma.net/pwee/pwbmap01.html

A sample of a yellow warbler song can be heard at: http://identify.whatbird.com/obj/343/_/Yellow_Warbler.aspx

Riley Woodford is a writer with the Alaska Department of Fish and Game, Division of Wildlife Conservation. He produces the online publication, Alaska Wildlife News, and the radio program “Sounds Wild.” His column on natural history and wildlife viewing appears every other Sunday in the Juneau Empire. For comments or questions, he can be reached at riley.woodford@alaska.gov