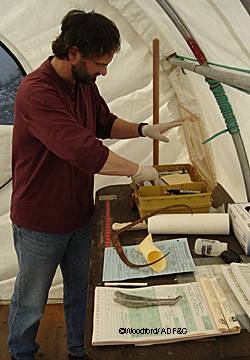 It was the peak of the bear hunting season in Southeast Alaska, and wildlife biologist Neil Barten had just finished measuring a bear skull in a big tent behind the Fish and Game office in Douglas, Alaska. Two more bears awaited measurement and inspection, and before the morning was out, three more would come in. These weren’t complete bears, just the heavily salted hides and skulls of bears harvested over the weekend.

Successful bear hunters in Alaska, resident and nonresident, are required to bring the hide (with feet and proof of sex attached) and the skull of all bears harvested to a Fish and Game office for sealing. Sealing refers to the seals or tags that are affixed to the skull and hides after a 15 or 20 minute inspection by fish and game biologists or technicians.

“These are real dentists’ tools,” said Barten, using an extractor to loosen a small tooth called a premolar. Barten traded the extractor for dental pliers and eased the tooth out of the socket. The tooth is cross-sectioned in a lab to determine the age of the bear.

Barten held up the skull and took a close look at the bear’s teeth. The skull was relatively small, and the big canines were in excellent shape. “You’d think this might be a young bear, but look at the wear on these front teeth,” he said, gesturing at the incisors. “I’d say this is a small bear, about 10 years old.”

He made a note on the sealing form. The completed form contains a wealth of information that helps biologists make management decisions. In addition to data about the harvested bear, the form details information on the hunter (and the guide or transporter if professional services were used), as well as specifics about the hunt.

Although the location of the hunt and harvest are recorded, Barten reassures hunters that this information is not shared with the public. Barten said the information gathered from hunters provides an indirect measure of population trends.

“The real value of the sealing data is that it allows us to look at trends over time, often many years. We look at the different hunt areas and how long they hunted – the hunt effort,” Barten said. “It can give us insight into the status of the bear population. If hunters are spending 10 days to get a bear, versus four or five in previous years, that may be an indication that fewer bears are available, which tells us something about how the population is doing.”

The same is true of the measurements taken of the bear skulls. If, over a period of years, Barten and other biologists find the skulls of harvested bears are getting smaller, that could indicate that younger bears are being taken.

“Hunters tend to take big bears, if they can, and a downward shift could mean there are fewer bigger, older bears out there,” Barten said.

Using a set of giant calipers, Barten measured the length and width of a bear skull – 11 and 14/16th inches by 7 and 1/16th inches, for a score of 18 and 15/16th. He was joined assistant area biologist Ryan Scott, and the two joked about the calipers as the “truthifier.” 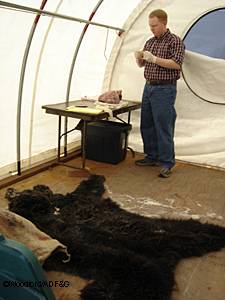 State biologist Ryan Scott pulls a tooth from a bear skull, with the heavily salted bear skin nearby. Photo by Riley Woodford

“A lot of people come in with what they think are ‘record-book bears,’ thinking a skull will score 28 or 30, and it’s about this size,” Barten said.

In Unit 1C, northern Southeast Alaska, black bear skulls average 17.7 inches, so the skull Barten was holding was just slightly larger than average. According to the Unit 1C black bear management report, the bears harvested are about 8 years old on average. The average skull size for brown bears in Unit 1 is about 22 inches for males and 20.3 for females, and the average age is about 7 years.

Trooper Rob Welch, with years of experience in wildlife enforcement, dropped by and commented on the hides and sealing process. “For sealing, the skull must be removed from the hide,” he said. “Every year we have folks at the trooper post who have skinned a bear but not skinned out the head, and they’re finishing the skinning job in the parking lot.”

“Sometimes the whole thing is frozen,” Barten said, “and they just have to come back.”

Juneau taxidermist Mike Nizich stopped by with three bears, dropped off at his shop by out-of-state hunters on their way to the airport. Nizich, an experienced hand with just about every aspect of bears, had filled out the paperwork and collected the information from the hunters, but wildlife officials still needed to inspect, measure and seal the hides and skulls.

“It’s like a floodgate opened this week,” he said. “I’ve got 30-plus already. Another six are coming in this evening, three brown and three black.”

Hunter harvest of black bears has increased steadily in northern Southeast Alaska (unit 1C) over the past 30 years. About 50 bears were harvested each year in the 1970s, about 70 in the 1980s, and 100 bears were harvested on average each year in the 1990s. In the late 1990s, the average climbed to about 150 bears harvested annually. That dropped to about 110/year in 2001-2003. About 80 percent of the bears are taken in the spring.

Only about four brown bears are harvested each year from the Juneau area, and the entire Southeast Alaska mainland yields only about 30 brown bears per year. By contrast, the ABC Islands – Admiralty, Baranof and Chichagof – draw hunters who harvest about 155 brown bears each year.

Although the black bear harvest numbers are down slightly this year, Barten thinks that the late spring, rather than a lower bear population, is probably the reason. The skull size, age of harvested bears and hunter effort indicates the population is healthy.

Riley Woodford works for the Division of Wildlife Conservation at the Alaska Department of Fish and Game. He has watched many wild bears, eaten bear meat, skinned a bear and cleaned the skull, but he’s never hunted bears.