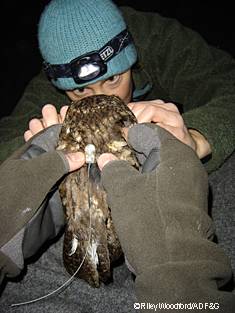 Biologist Michelle Kissling adjust the straps on a backpack-style radio transmitter for a Western screech-owl. Photo by Riley Woodford

Biologist Steve Lewis held the little western screech-owl as Michelle Kissling attached the tiny backpack radio transmitter. For the next 10 months, this owl will be transmitting his location, helping to answer questions about screech-owls in Southeast Alaska.

Catching a screech-owl requires some tricks. A week earlier, in mid March, the two researchers had lured an owl near their mist net, a nearly invisible nylon mesh 8-feet tall and 40-feet long that would harmlessly entangle the bird. The biologists played a recording of a screech-owl hooting in defense of a territory. The call attracted the owl, but he avoided the net. On this night they had better bait: an improved recording that included a female screech-owl’s contact call, as well as the male’s call, and a decoy.

The decoy was a little plush stuffed animal, a baby snowy owl. The decoy didn’t look like a screech-owl, but it was bird-like and the right size. Placed under the net, near the field CD player, Lewis hoped the toy would draw the wild screech-owl into the net.

“Some just hoot back, but won’t come in close,” Lewis said. “Sometimes we use a mouse decoy to lure them close to the net.”

Although eastern screech-owls screech and hoot, western screech-owls don’t screech. Their call is described as a tremulous whistle, a series of soft, evenly pitched hoots that start slowly and increase in cadence, like a bouncing ball coming to rest.

Lewis works for the Alaska Department of Fish and Game and Kissling is a biologist with the U.S. Fish and Wildlife Service. The three-year owl project is a partnership between the agencies, funded by a federal grant to improve understanding of nongame wildlife. The biologists are establishing a network of volunteers throughout Southeast Alaska to help document and monitor owl populations. Equipping screech-owls with radio transmitters is one part of the project.

The first step was driving the muddy, pothole-cratered Mitkof Highway south of Petersburg after dark. Every few miles Kissling and Lewis stopped and played a screech-owl territory defense call, and listened intently for an answer. Because many owl species will hoot back in response to a broadcast or imitated call, this technique is widely used to locate, monitor and even attract wild owls.

Shortly after 8 p.m., as the temperature dropped below freezing, two owls responded to the call – a screech-owl and a barred owl, a much larger species known to prey on screech-owls. Kissling and Lewis were concerned about possibly drawing in a potential predator, but the barred owl did not come closer. His deep hooting, phrased as “who cooks for you,” never changed location. 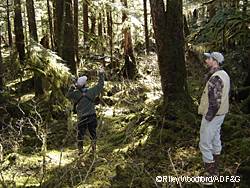 Within moments, however, the screech-owl moved in, hooting in the trees just a dozen yards back in response to the recorded call. The mist net was quickly erected, complete with decoy, and the biologists left the scene. They drove a quarter-mile down the road and prepared the thimble-sized radio and their owl processing gear. When they returned a few minutes later, a screech-owl was in the net.

Lewis deftly untangled the bird, which snapped and clacked its beak. He easily avoided the beak, but the needle-sharp talons were the real threat. Fortunately, screech-owls have a reputation for being relatively docile, and this bird quickly relaxed in Lewis’ firm but gentle grip.

The owl was banded, weighed and measured, and the tiny transmitter was attached like a small backpack. A breast feather was pulled, which will reveal genetic information. The radio, weighing less than a nickel, was tested and the owl released into the night. The next day the biologists returned to the area and resighted the owl in a cedar tree a quarter-mile from the capture site.

By mid-April, Lewis and Kissling equipped four screech-owls in the Petersburg area with VHF radio transmitters. These owls will help biologists better understand the detectability of screech owls.

“One reason they vocalize is to attract a mate and defend a territory,” Kissling said. “There’s evidence to show that once birds attract a mate and get down to the business of nesting, they’re not really vocalizing much, they’re just focused on hunting and provisioning the female on the nest. If that’s true and we’re surveying late, you’ve got to wonder how many birds you’re missing. You might think ‘Owls have declined by 50 percent,’ but really the birds have paired up and you’re not hearing them. You’re not counting birds that are actually there.”

“We’re also learning about their preferred habitat and other basic natural history information,” she said. “Where are the birds, what is their home range, are they nesting, what are their numbers and relative abundance, and what is their distribution in Southeast Alaska? When the young disperse, how far do they move?”

Genetic analysis will also help determine how closely Southeast birds are related to birds in British Columbia, Oregon and Washington, and help scientists better understand how these nonmigratory birds have extended their range.

Kissling said the development of the monitoring program is the main priority of the project. More than 60 volunteers, ranging from professional biologists to high school students, are surveying hundreds of locations in or near 12 Southeast Alaska communities.

Barred owls are particularly interesting. A few decades ago, barred owls were unheard of on the West Coast. The 1980 “Audubon Society Encyclopedia of North American Birds” describes the barred owl as occurring east of the prairie states: “In the Far West, where it is not found, its counterpart is the spotted owl.” But barred owls are now rapidly expanding their range and interbreeding and hybridizing with spotted owls in the west.

Juneau naturalist Bob Armstrong and birder Frank Glass documented the first barred owl in the Juneau area in 1977 at the end of the North Douglas Highway. Today, barred owls are one of the most common owls in Southeast.

Biologists don’t know if the barred owls are displacing other owls, because so little is known about the distribution, ranges and populations of owls in Southeast. The work of Kissling, Lewis and the owl volunteers should change that.

For more information on the Southeast Alaska Owl Network, contact Irene Morris of the Juneau Raptor Center, at overkill@gci.net .

Riley Woodford is a writer with the Division of Wildlife Conservation at the Alaska Department of Fish and Game. Long a fan of owls, he conducted a year-long study of the diet of barn owls in Eastern Oregon in the mid 1980s, and spent five months in 1992 doing field work on spotted owls in Northern Arizona.