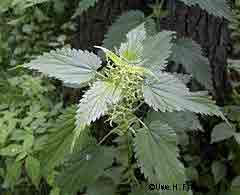 The monthly Alaska Wildlife News recipe usually features either fish or game, but April presents an unusual opportunity. We’re between most of the fishing and hunting seasons in Alaska, and spring is in the air. So this month we’ll feature a side dish, a green that is at its prime in early spring – the stinging nettle.

Nettles are more than edible, they’re delicious. As you can guess, they must be cooked, but it doesn’t take much to neutralize the stinging. This is not one of those quasi-edible plants that must be boiled for an hour in three changes of water. It just needs to be lightly steamed or sautéed – like spinach or other greens.

Nettles can be easily gathered in the lower reaches of avalanche slopes and on sunny hillsides that warm in early spring. They prefer damp soil, often in somewhat shaded locales. The nettle is an easy plant to identify. The leaves grow on opposite sides of the stem, they have toothed margins and come to a point. That sting is a pretty good identifying characteristic as well.

Nettles are one of the first green perennials to emerge. The buds come poking up through the soil, and are best picked when they are less than five inches tall. I take the top three inches of the emerging plants. Once the plant is much bigger, it’s not worth harvesting. Brush any soil off the buds and save them in a bag. Use gloves when picking, or keep your hand inside a plastic bag, to avoid the sting. 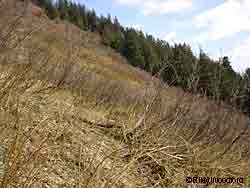 Avalanche slopes are prime areas to pick stinging nettles in the spring, as the young shoots first emerge. Photo by Riley Woodford

I don’t really mind the sting and have picked with just my hands, but some folks find it more uncomfortable. The plant has tiny, tiny thorns loaded with formic acid, which causes the irritation.

Rinse the greens well to remove any grit or soil. I prefer sautéing the greens in salted butter, for just a minute. Frying a little bacon first and using the bacon fat is another option. Some recommend steaming, which is worth a try if that’s how you like greens.

I’d recommend trying a small amount before picking a basketful. If you like nettles, they can be harvested all spring long. Always focus on the emerging plants, but just keep going higher in elevation. In June, when the nettles at sea level are three feet high, fully grown and beginning to flower, young buds will still be emerging from the soil up around 1,000 to 1,500 feet.

A couple of interesting notes: This plant is found throughout Europe, and in the 19th century nettle was cultivated for fiber. The stems are fibrous, like flax, and produce a sort of low-quality linen that never really succeeded commercially. Unlike many plants, which produce both male and female flowers, nettle plants are dioecious, either male or female.