Toads and Frogs in Trouble 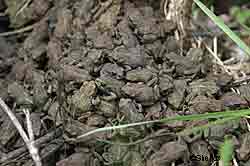 A pile of toads shortly after metamorphing from tadpoles. Photo by Tim Shields

Frogs and toads are turning up in Alaska with shrunken hind legs, malformed lower jaws and the occasional extra limb, and biologists want to know why.

“Alaska has a higher rate of abnormal frogs than just about anywhere in the U.S.,” said Dave Tessler, a biologist with the Alaska Department of Fish and Game. “We’ve seen them in Kenai, Tetlin and Big Lake, both on and off road system.”

Tessler said there is no way to know if these abnormalities are increasing, since biologists have just recently begun scrutinizing Alaska’s amphibians.

Tessler and several dozen scientists gathered in Juneau in mid-February to coordinate efforts to learn more about Alaska’s amphibians. Biologists from Oregon, Wisconsin, Montana, Colorado and across Alaska shared expertise and strategies at the Second Alaska Amphibian Conference. Scientists discussed ways to integrate studies in Alaska with national research and monitoring efforts.

“We had some of the very heavy hitters in amphibian research, conservation and monitoring,” Tessler said.

Among other things, biologists looked at the current and future threats to amphibians, how global climate change may be affecting amphibian populations in Alaska, and factors contributing to wood frog abnormalities on the Kenai National Wildlife Refuge. Other presentations focused on effective ways to study Alaska’s often elusive amphibians.

“We discussed various methods of monitoring, different statistical approaches for looking at amphibians, and different habitat characteristics we might want to monitor in conjunction with amphibian populations,” Tessler said.

An important aspect of the conference was establishing a standard frame of reference for amphibian research in Alaska, guidelines that will make it easier for scientists to share data and contribute to a statewide amphibian occurrence database. By coordinating protocols, a scientist seeking answers to specific questions about amphibians in Glacier Bay will be able to contribute potentially valuable data to researchers in the Interior studying changes to amphibians and their habitats.

“We also looked at ways to standardize screening for disease, especially chytrid fungus, which has been implicated in die-offs worldwide, and it has shown up here in Alaska,” Tessler said. 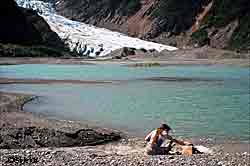 An amphibian monitor at Davidson Lake near the Davidson Glacier. Tadpoles are found in the icy waters of this lake. Photo by Tim Shields.

“Amphibians are disappearing at an alarming rate down south,” Tessler said. “They have hard evidence on the populations they’ve been monitoring – they have seen populations extirpated – not over decades but over a span of just a few years. When it happens that fast you don’t even have time to investigate causes, it’s over and they’re gone.”

Wood frogs and boreal toads are the most common and widespread amphibians in Alaska. One species of newt and two species of salamanders are found in Southeast Alaska, but very little is known about these small, scattered populations.

Scientists looked at some of the stressors and drivers affecting amphibians in Alaska. Stressors are deleterious, while drivers are important factors such as climate change that may affect amphibians positively or negatively.

“Certain aspects of climate change might be hard for amphibians in Alaska ¬– wetland drying means they lose habitat,” Tessler said. “In other areas a change in permafrost depth could increase the extent of wetlands, or create less acidic wetlands, ponds instead of bogs in spruce stands, or milder winters and a longer growing season.”

Haines herpetologist Tim Shields has monitored toad populations in northern Southeast Alaska since 2002. He’s found toad tadpoles in the frigid waters of the lake below the Davidson Glacier, in trash-filled puddles near industrial areas, in gravel pits and in pristine marshes. Amphibian populations really fluctuate from year to year, he said, but he thinks there is a trend in Alaska.

“Old timers consistently report that there used to be many, many more toads in general,” he said. “I’m sure there has been an important decline. What I learned at the conference is it’s happening elsewhere; Sitka, Juneau, it’s the same picture.”

Last year Shields monitored 11 sites in the Haines area and looked at literally millions of toad tadpoles. He said even in good conditions, very few of those tadpoles make it to adulthood – as few as one in 10,000.

“When you see 200,000 tadpoles it’s an impressive sight, but few survive,” he said. “It makes being a salmon look like a cakewalk. The fecundity is impressive, but mortality is equally impressive.”

Counting thousands of tadpoles is a skill Shields has honed over the years. “I’ll count groups of tens or hundreds,” he said. “You develop a sense for quickly estimating groups. Sometimes I’ll look at a puddle and estimate, say, 3,000, then do an actual count and I’m usually within 10 percent. I’ve seen a million tadpoles at a single location. You develop a feel.” 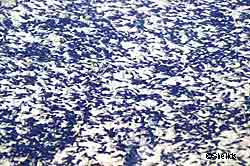 Shields is the executive director of the Haines-based Takshanuk Watershed Council, and most of his work is related to salmon habitat issues. Monitoring amphibians is largely a labor of love, he said, and he’s developing a team of volunteers to help with the research. He wants to document the distribution of various species, do disease and deformity surveys, and monitor specific sites.

“The chytrid fungus phenomenon is very well studied in the Lower 48, and if it’s coming this way we want to track the progress and possibly do some intervention on behalf of the species,” he said. “There is a possibility of it showing up and we want to be ready.”

The chytrid fungus is not the only amphibian killer at large, and Dr. Carey pointed out that some populations of amphibians are resistant to it. Different amphibians are more susceptible than others. Tessler said a variety of stressors working in concert are probably responsible for the widespread decline of many different species of amphibians.

“In certain areas ultra-violet radiation is believed to be important, especially areas where water quality and water clarity have changed,” he said. “There are areas where new species of fish have been introduced, and all the amphibians have been wiped out. The introduction of non-native amphibians has been a cause of decline in certain areas, because of direct competition for food or direct predation on tadpoles or young.”

Other factors include draining and development of wetlands, habitat loss and water pollution. Amphibians are extremely sensitive to changes in water quality and water chemistry.

“This is a good reason for us to invest efforts in monitoring amphibians – they enable us to monitor water quality in our own watersheds,” Tessler said. “If they’re having problems, they’re not going to be alone. So when we start to see high levels of abnormal frogs in areas across Alaska, it's cause for pause, if not concern.”

Riley Woodford is a writer with the Alaska Department of Fish and Game, Division of Wildlife Conservation.