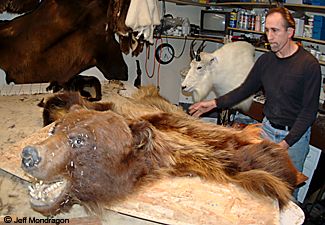 Mike Nizich of Rug-N-Rack Taxidermy in Juneau, Alaska, displays one of his current projects.

The caribou was taken just a few days into an extended hunt, hundreds of miles from Anchorage. The hunter saved the head, envisioning an attractive wall mount that would serve as a lasting reminder of a memorable hunt and a tribute to a respected game animal. Unfortunately, he neglected to skin, salt, refrigerate, freeze or preserve his prize. A week and a half later, when he visited the Anchorage taxidermist, his "trophy" had greatly deteriorated - and he was genuinely surprised that it couldn't be salvaged.

All too often, taxidermists are handed damaged goods. Taxidermists see hunters making the same mistakes skinning and caring for the hide of the animal, mistakes that noticeably affect the quality of the final product.

"You spend money to go on a hunt that you may never do again and you get a trophy - it just takes a little research to make a big difference," said Kim Barter with Last Frontier Taxidermy in Anchorage. "We get so much work in that could have been better if they just would've known - how to make the cuts, to salt it - and we want them to know."

Taxidermy has come a long way in the past decade. Better materials and improved techniques enable taxidermists to create much more lifelike and realistic mounts. Many taxidermists are talented artists, but none are magicians.

Several taxidermists said that if a hunter is back in town after just a day or two in the field, they can bring their trophy in and the taxidermist will skin it. Birds can be carefully wrapped and frozen to preserve them before delivery.

Hunters in the field for any length of time need to skin their game. If a hide isn't removed and properly cared for, the hair slips. Caping or skinning an animal properly involves some technique, but it's fairly straightforward. A few tips make a big difference.

"I think most taxidermists would appreciate that hunters in the field know the initial skinning diagram," said Juneau taxidermist Mike Nizich of Rug-N-Rack Taxidermy. Much of Nizich's work is on bears. "Often they don't know where to begin, they corkscrew the legs, go up the middle of the leg, and turn a normal-looking bear into a two-foot-wide bear that's nine-feet long."

A few years ago, Nizich worked with Fish and Game to prepare a bear-skinning instructional flier that is free and available to hunters through most Fish and Game offices. The one-page bulletin, "Skinning Bear," details proper skinning techniques. It also diagrams the important and tricky face and paw cuts. It's available at http://www.adfg.alaska.gov/index.cfm?adfg=blackbearhunting.skinning
Most taxidermists can provide skinning diagrams and advice for hunters, and will happily answer questions about specific animals. Several years ago Barter and her husband produced a video titled, "Now What?" that details and illustrates the field care for fish, birds, and big game. 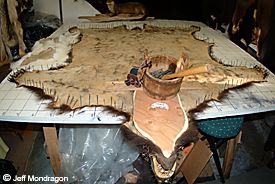 A bear skin being prepared.

Chugiak taxidermist James Gebel of Creative Taxidermy said when hunters are caping out an animal for the classic shoulder mount, they often don't leave enough hide for the taxidermist to work with.

"Consider mid-body to be the circumference cut," he said. "People usually go right back behind the shoulders, and we need a few more inches, about six to eight more inches, to work with. That also opens up a variety of mounts."

The best advice for skinning is to use a small knife. Some taxidermists use utility knives to skin animals, which enables them to quickly replace dull blades rather than taking time to sharpen knives.

"A smaller knife is better, especially once you get up in the facial area," Gebel said. "A small, sharp knife with a three to four inch flexible blade. Like a paring knife, or a small kitchen knife."

"I do everything with a four-inch little knife," Nizich said. "You have better control, you can get into the tight spots and it holds the edge, unlike a big wide hunting knife."

Control is especially important when skinning around the head and face.

"You've got to stay really close to the skull," Barter said. "You don't want cuts on the face. The hair is short on the face and it's mostly skin. Cuts can show. There are some accidents you just can't hide."

"The ear should be cut off right at skull," Gebel said. "The eyes are same way - we need as much eyelid as possible, lips, and nose - cut off right at the skull. The more skin the taxidermist has to work with the easier his job is, and the better quality the mount."

Nizich said with bears, it's important to skin the paws down to the last digits and cut them so the claws remain with the skin. It's also important to pull the short tail bone out of the tail.

Care of the skin
Once the skin is off, it's important to remove excess fat and tissue. This is easy to do at first and very difficult to do later. With spring bears, Nizich said a thin layer of meat adheres to the skin on the flanks and underbelly, which can be peeled off right after the animal is skinned.

Another tip is to split the lips, cutting from the inside, which creates another inch of material for the taxidermist to work with. That's used to anchor the mouth to the form, (the plastic "skull" and material that goes inside the mount) and is especially important for open-mouthed mounts. The lips of most trophies are thin. Care must be taken when splitting them to avoid cutting holes in the delicate tissue.

Any blood should be rinsed off the trophy. Blood attracts bacteria, and bacterial activity will cause the fur and hair to slip and fall out. 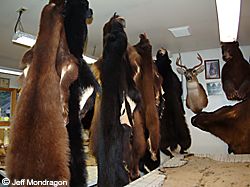 The next step is critical - salting the hide. Salt draws the moisture out of hides and tightens up the hair follicles. This is particularly critical on the face, where hair is thin and any hair loss is particularly noticeable. Liberally salt the skin side of the hide, packing salt inside the ears, around the nose, on the split lips and on the fur side of the muzzle as well.

Nizich recommends using 20 pounds of salt on an average black bear hide and twice that on an average brown bear. Salt the feet and between the toes as well, and get salt down into the tail.

Never store or transport a hide in a plastic bag, or wrapped in plastic. Instead, always store a hide in a burlap or game bag, in a cool, dry place out of the sun. Hanging the bag allows the hide to drain and dry.

What to expect from the taxidermist

It can take between nine and 18 months to get a finished product back from a taxidermist. There are several reasons for the wait. Taxidermy work tends to be seasonal: two years ago Nizich received 16 brown and black bears in just a couple weeks in May.

Nizich and other taxidermists depend on professional, commercial tanneries to tan the hides.

"Tanning is another whole business," Barter said. "It take too much time and space to do both - it takes a big shop to do tanning."

"A lot of the tanneries and taxidermists get pretty overloaded in summer," Gebel added. "A lot of tanneries have three-month turn around, and a taxidermist needs at least another month after they get back the tanned fur."

Here are some ballpark prices for the most common taxidermy work. The cost of materials for the taxidermist increases with larger animals.

Gebel said he appreciates all kinds of taxidermy work, but he does have his favorite.

"They're all God's creatures, and I enjoy doing all of them," he said. "But if I was to pick out one, it's re-creating the scene - with say, a lynx going after a ptarmigan, or a river scene with a bear, incorporating habitat, making a real-life snap-shot of the animal in the woods. I like to bring them back as lifelike as possible."