Where The Fish Are
The Fish Distribution Database 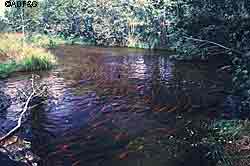 Have you ever wondered, “Are there fish in that stream?”

Recreational anglers and wildlife viewers – anyone interested in fish for any reason – can check the Alaska Department of Fish and Game (ADF&G) website to learn about specific bodies of water and the anadromous fish that inhabit them. ADF&G, in partnership with the Alaska Department of Natural Resources, maintains the Fish Distribution Database (FDD), identifying those streams and lakes important to anadromous fish such as salmon, as well as some trout and char.

To make the information in the database more accessible and useful to the public, a publication called the Alaska Anadromous Waters Catalog has been developed. In addition, a set of maps detailing the presence of anadromous fish in most areas of the state is available as well. These can be accessed online through the Division of Sport fish website, at: http://www.adfg.alaska.gov/sf/SARR/AWC/
The website gives an overview of the database, with a wealth of information on sport fish in the state. Simply hit the button for “interactive mapping” to find maps. The focus is anadromous fish.

An “anadromous fish” splits its life cycle between fresh and salt water. Anadromous fish rear in freshwater, migrate to the ocean where they feed and mature, and return to fresh water to spawn. These fishes include the anadromous forms of Pacific trout, as well as salmon of the genus Oncorhynchus —rainbow and cutthroat trout and chinook, coho, sockeye, chum and pink salmon. Anadromous fish also include Arctic char, Dolly Varden, sheefish, smelt (such as hooligan), lamprey eels, whitefish, and sturgeon.

Habitat biologist J. Johnson maintains the Fish Distribution Database and the Anadromous Waters Catalog for the Sport Fish Division. These were developed as a part of ADF&G’s efforts to protect fish resources in Alaska.

Identifying and protecting anadromous streams has always been important to Alaskans, he said. Although anadromous streams had some protection under territorial government, it wasn't until Alaska became a state that those protective measures were broadened, eventually leading to legislation in 1966 that required a formal listing, and the start of the AWC.

“Anadromous fish, especially salmon, are critically important to Alaska’s economy and cultures, and the FDD and AWC are equally critical to their continued presence,” Johnson said.

Although the purpose of the database is to document anadromous fish distribution, which helps ensure responsible resource development and sustainable fish populations, Johnson has found the information is appreciated by recreational anglers and wildlife viewers. 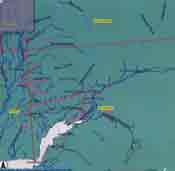 The set of interactive maps on the Fish Distribution Database website allows users to search different areas of the state for different species of fish, and zoom in on different watersheds. The pink lines here indicate coho salmon.

“The general public definitely finds the AWC useful,” he said. “A number of anglers have contacted me to find out if a certain stream has salmon. And fishery managers and hatchery managers also regularly consult the FDD and AWC when planning fish stocking activities in their areas.”

For example, if you wanted to find out if the upstream reaches of the Seldovia River have Steelhead Trout, or which streams in Prince William Sound have runs of coho salmon, you could consult the catalog and atlas.

Although the database contains about 16,000 bodies of water across Alaska, it is believed that this number represents less than 50 percent of the streams, rivers, and lakes actually used by anadromous species. Data is added to the database through a nomination process, with the majority of the nominations coming from state and federal biologists.

Nomination information is thoroughly reviewed before being added to the database and its publications.

ADF&G is in the process of converting the original database maps into electronic format.

“We're excited about converting to a digital GIS format because this makes the information in the database and the catalogue more widely available,” said Johnson.

You can contact the Alaska Department of Fish and Game or the Department of Natural Resource to learn where hard copies of the catalog and the atlas may be viewed.

Or, for a single location that has both state and federal natural resources publications, visit the Alaska Resources Library and Information Services facility, located on the campus of the University of Alaska – Anchorage, at www.arlis.org.

For more information about the database, contact J. Johnson in Anchorage at (907) 267-2337 or j.johnson@alaska.gov