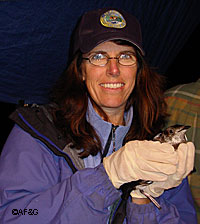 Kristen Romanoff’s job has taken her from wolf dens on Prince of Wales Island to classrooms in Sitka and Juneau. Romanoff is one of four educators with the Alaska Department of Fish and Game’s Division of Wildlife Conservation. She’s responsible for education in Southeast Alaska.

She helped organized an annual deer celebration bringing together diverse interests on Prince of Wales Island, developed brochures detailing how to tell if a moose is legal to kill, wrote and recorded radio spots on bear safety, and directed wildlife workshops for teachers throughout Southeast Alaska.

And at times she dives into biologists’ research projects to educate herself and then the public on work the department is doing. That’s how she wound up inside the wolf dens, helping Ketchikan biologist Dave Person count pups for a study of the island wolves’ reproductive success and population dynamics.

“It was amazing to gather sound recordings of the puppies,” Romanoff said. She taped their squeaks, moans and yips. Outside the den the pack was barking and howling. “Using sounds from the field, you can really create an image for people listening to a story.” Romanoff produced a radio piece about Person’s wolf research that was aired statewide on the Alaska Public Radio Network.

Romanoff has also helped Juneau biologist Matt Kirchhoff with a marbled murrelet study in Port Snettisham, zipping around with researchers in a small boat with a spotlight in the pouring rain and darkness trying to catch robin-size sea birds with a net. “It was all in the middle of the night, between 11 and 3, when the birds are feeding,” she said.

The researchers can use the extra pair of hands in the field, and Romanoff is able to gather images, sounds, and first-hand knowledge that she can later use to create radio and print stories about the research.

“I love my job,” Romanoff said. “I’m learning all kinds of things I wouldn’t otherwise have the opportunity to learn about.”

Romanoff, a mother of two, brings 20 years of science education experience to the job. An Oregon native, she has a bachelor’s degree in environmental studies from University of California Santa Cruz and a master’s degree in science education from Antioch University. She worked two years as a classroom teacher, did a stint with the Oregon Museum of Science and Industry, then worked for Discovery Southeast in Juneau for nine years as a naturalist and later as program director. She has also taught science methods for the University of Alaska Southeast’s master of arts in teaching program. 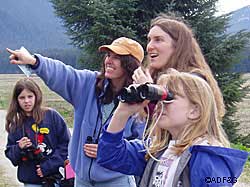 That background helps Romanoff with the teacher training she does for Fish and Game. She facilitates workshops on how to use national Project WILD curriculum and the state’s Alaska Wildlife Curriculum. She also produces educational materials, such as a teaching guide to accompany the department’s animal skull collection that teachers can check out.

Sue Baxter has worked with Romanoff in the classroom, co-teaching both kids and teachers. Baxter was a teacher in the Juneau School District for many years and now works at the UAS MAT program. She said Romanoff’s field experiences pay off in the classroom.

“She brings to classroom all the knowledge she gains at Fish and Game,” she said. “All her field experience gives the material relevance to the teachers.”

The Project WILD curriculum can be overwhelming and intimidating for teachers, Baxter said, and Romanoff is outstanding at breaking it down into introductory pieces so the teachers become comfortable with the resource.

Having Romanoff on staff helps take some of the load off staff biologists’ shoulders, said Southeast Regional Supervisor Doug Larsen.

“She’s been extremely good at coming to the regional staff and saying, ‘What are some of the issue you’re having to deal with, and are there ways I can help you deal with those issues?’”

Those conversations lead to projects such as the brochure on how to identify a legal moose. Biologists can simply hand out the brochures instead of having to explain the issue to every hunter, Larsen said.

One of the big challenges in Juneau and other Southeast communities has been educating the public about bear safety, including responsible handling of garbage to avoid attracting bears to neighborhoods.

Romanoff helped set up bear awareness programs in the schools, as well as a neighborhood campaign each spring, which sends volunteers door to door with tips on living safely with bears. “We target the real hotspot neighborhoods,” Romanoff said.

She also helped get a pilot program going to provide bear-resistant garbage containers to some mobile home park residents and has recorded several radio spots on bear safety. Her work, combined with the efforts of others and tougher law enforcement, seems to be making a difference.

“The bear calls are way down, and the number of bears that have to be killed is dropping significantly,” Romanoff said, “It certainly tells us our education efforts are having an impact.”