Wolverines, Bears and Math:
The Art and Science of Statistics 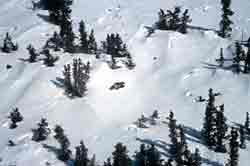 Wolverines are difficult animals to study. A new method of determining population densities has been developed that focuses on fresh tracks.

Cruising down a streamside trail on Chichagof Island, a big brown bear puts his head through a snare. The light wire breaks after snagging a clump of woolly brown hair. That bear doesn’t know it, but he’s been captured as far as wildlife biologist Grey Pendleton is concerned.

In Interior Alaska, a set of fresh wolverine tracks winds across a snowy slope in the calm of a clearing storm. Looking at the tracks, most people would simply infer that a wolverine passed by. But wildlife biologist Earl Becker sees an entire population of wolverines in those tracks.

A number of biologists with the Alaska Department of Fish and Game share Pendleton and Becker’s expertise. They are biometricians, practitioners of the art and science of biological statistics. They contribute to the management and understanding of wildlife, from sea lions and grouse to shrimp and fish. Their work enables hunters to harvest more deer, moose and caribou, because wildlife managers are better able to accurately assess populations and trends.

Biometricians are developing cheaper and more efficient ways to estimate population sizes, and new tools to study notoriously difficult animals. They also help other scientists ask the right questions, and make sense of their data. Pendleton said collaboration between biometricians and other biologists is a key part of his work.

“I wind up helping design experiments,” said Pendleton, a biometrician for the Southeast region. “I help researchers get the answers to questions in a more defendable, neater, and more repeatable way. The same thing applies to management, like surveying hunters. If we do a good job of designing the survey we get better quality information.”

That involves designing the survey to reduce bias, getting a good quality sample to survey, and quantifying uncertainty about the results.

“All research has a certain amount of uncertainty and you want to know how confident you are in your estimate,” Pendleton said. “It’s uncommon to measure everything. You don’t ask every hunter what they did, you ask a percentage and then extrapolate. That’s why we need to take into account error, because you didn’t measure everything.”

That also applies to bears. The hair snare project is a team effort involving a number of biologists, but they don’t need to count every bear to learn the population in an area. The hair snare, which grabs a DNA sample in the follicles of those hairs, allows the researchers to identify and count a sample of the bears.

“By looking at which ones you see and how often you see them, you can estimate how many are there and how many you don't see,” Pendleton said.

Amy Lee Russell worked with Pendleton on a seven-year study of spruce grouse in southern Southeast Alaska, work that was the basis of her masters’ thesis. 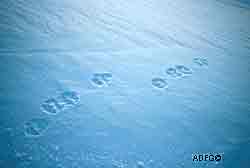 “Grey helped me a lot on my thesis,” said Russell. “His knowledge of advanced math is far reaching, and he can bring it down to simple terms. It’s nice to figure how you are going to analyze data before you collect it, but if you’ve got data, he helps you put it all together. He does it objectively, and he doesn’t cut corners or squeeze things into place.”

Wolverines are elusive, difficult animals to study. Biometrician Earl Becker of Anchorage has developed a cost-effective technique to estimate wolverine populations based on aerial surveys of tracks in fresh snow. Becker said the math is similar to that used to figure out card combinations in poker. You know there are four kings in a deck, he said, so what is the probability of three kings coming up if you draw seven cards.

“We knew where animals were likely to be after a snowstorm,” Becker said. “We can generate a population estimate if we can figure out a way to determine the probably of finding the tracks we observe during an aerial survey. Basically the observed track length and location – in an area we thought likely to contain a track or that we considered unlikely – gives us enough information to determine the probability of finding the track and thus a population estimate.”

The method has also been applied successfully to wolves, and is used to estimate wolf numbers on the North Slope, around Galena and McGrath, and for wolverines in the Talkeetna, Chugach and Kenai Mountains. Canadian biologists have also adopted the technique. It doesn’t work well in Southeast Alaska, because the timber is too dense.

Becker said experimental designs based on statistical methods are important scientific tools and are at the heart of scientific advances, particularly in medicine and the development of new drugs. “When we can gain enough control over the environment to use these techniques, there is nothing more powerful for answering questions,” he said.

Several years ago Becker helped address a problem with train-moose collisions in the Matanuska-Susitna Valley. In times of deep snow, moose were using the train tracks as corridors to move around, and they were getting hit by the trains. Initially, Fish and Game suggested that slowing trains down would save moose by allowing them more time to exit the tracks. The Alaska Railroad was skeptical, Becker said, and also worried about the economic costs of operating at slower speeds. A joint Fish and Game and Alaska Railroad experiment was conducted using a train that ran between Willow and Talkeetna for 14 nights. The results conclusively indicated that slower speeds simply changed the location where a moose was struck by a train (to farther down the track), but did not save moose. The elimination of this potential solution led to a speedier solution that did work – using a pilot car with firecrackers on the track prior to train passage. 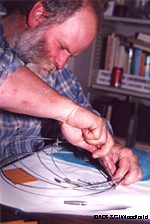 Becker has verified the accuracy of the new technique by comparisons to estimates derived from mark-recapture studies. A recent study on Kodiak Island showed the two methods were in very close agreement, Becker said, indicating about 370 bears per 1,000 square kilometers.

It’s not just about numbers. Becker and Pendleton love to get outdoors, to observe animals first hand and work with researchers.

“The analysis is interesting,” Pendleton said. “But getting out in the field is fun, and it’s beneficial to get out and see how it works on the ground. It’s important to see the realities of how it is in the field.”

Pendleton has been studying Steller sea lions on Benjamin Island in Southeast Alaska. Bobbing in a boat or huddled on a bluff above the haulout in winter, he and biologists Lauri Jemison and Ken Pitcher have been looking for marked sea lions to estimate the number of young animals that are still nursing.

“We want to estimate the proportion of sea lions that have been weaned at different ages, or are nursing into their second and even third year,” he said. “That’s where the biometrician comes in. If you see it nursing, you know it’s not weaned. If the pup is not nursing, you don’t really know - you just could’ve missed it. But by resighting over time you can estimate the probability that a pup is still nursing. The statistics allow you to correct raw observations.”

Riley Woodford is a writer with the division of wildlife conservation at the Alaska Department of Fish and Game. He struggled with algebra but enjoyed statistics.