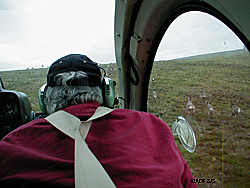 In late May, 2005, the Nelchina caribou herd gathered in the foothills of the Talkeetna Mountains in Interior Alaska. This is the calving grounds and summer range for the Nelchina herd. Thousands of newborn caribou were mixed in with the cows and bulls on the hilltops and ridges overlooking the Susitna River. Wolves are scarce in this area, and calf survival has been high in recent years.

During the month of June, as the weather grew hotter and insects more irritating, the caribou bunched up – just what Alaska Department of Fish and Game biologists want. This seasonal congregation allows biologists to count the number of animals in the Nelchina Herd. Sixty caribou cows dispersed throughout the herd are wearing active radio collars, helping biologists to define the size and perimeter of the herd. 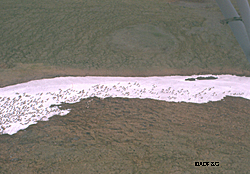 The night before the count, biologist Becky Kelleyhouse flew over the area and mapped the outline of the herd, dividing it into five sections. On the morning of July 8, five observers in five small planes flew over the ridges and began methodically counting caribou. The caribou move about as the air warms and insects become active, and observers need to be extra careful not to count the same animals twice. By midafternoon biologists had counted a total of 36,993 animals.

Although groups were concentrated densely the night before, they began dispersing the morning of the count with some caribou moving down off the ridges into the trees where they’re more difficult to count. Kelleyhouse said she is confident the actual size of the herd is closer to 40,000. The final estimate of the herd size comes in October, when biologists look at the ratio of bulls to cows and get a better sense for how well the young calves survived their first summer. 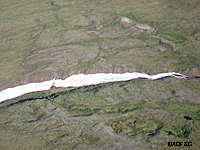 Caribou move across a snow patch near the Susitna River

In recent years, biologists have seen 52 calves per 100 cows during October flights - indicating very good production and good calf survival. This knowledge helps managers monitor the status and health of the herd, and determine how many animals should be hunted.