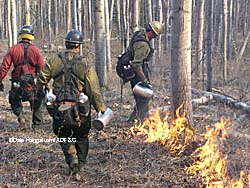 With a hot, dry spring, conditions were perfect for burning in Interior Alaska. The 26-acre fire burned hot in mid-May on Nenana Ridge south of Fairbanks, killing large stands of mature aspen trees.

This was not a natural wildland fire. The fire was started on purpose by the Alaska Department of Forestry, working with Fish and Game biologists to improve habitat for ruffed grouse. Fairbanks biologist Dale Haggstrom said the controlled burning top-kills the aspen trees, causing them to put up new shoots from their roots and creating a dense young stand of aspen. When the young aspen are five to 10 years old, they begin serving as protective cover for ruffed grouse broods from predation by goshawks and owls. The adjacent, untreated mature aspen remain as a good source of food for ruffed grouse in the winter.

Over the past eight years, the state agencies, working with the local Ruffed Grouse Society, have burned about 100 acres on the Nenana Ridge. The habitat improvement also benefits moose, which browse on the nutritious young aspen shoots.

Wildlife technician Kalin Kellie and biologist Tom Paragi conducted wildlife surveys in the area a few months after the burn and said grouse are abundant. 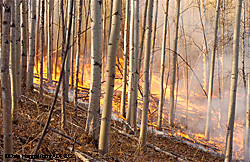 “We were working around Nenana Ridge and in the Standard Creek and Cache Creek areas and we saw a lot of grouse, tons,” Kellie said. “The broods sizes were often six or seven. Not only were we seeing a lot, they we in big groups, so it was good sign.”

Grouse populations fluctuate in roughly ten-year cycles, and the birds are on a population upswing.

“The timing of the habitat manipulation is providing them with a lot of food just as the cycle is bringing the numbers up,” she added.

The hunting season for grouse opens Aug. 10 in the area.