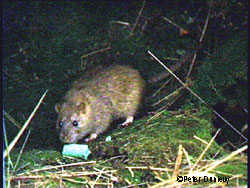 Norway rats, also known as cellar rats and sewer rats, are not from Norway. They originated in Asia and were spread through shipping and trade.

Rats have long profited from their close association with humans, tagging along as people colonized the Earth. This “commensal” trait is just one of the qualities that have helped rats and mice spread throughout the world.

“Almost any rodent can cause problems, but the commensal species are the ones you hear about, the ones that live around people, and most importantly around transportation,” said biologist Peter Dunlevy, whose career has focused on invasive rodents. “The problem starts when you move things from where they belong to where they don’t belong. Rodents are good at exploiting this.”

Three rodent species have caused the most profound problems worldwide: the Norway rat, the roof rat and the house mouse. All breed year-round, have short gestation periods and large litters. They quickly populate new environs and recover rapidly when their numbers are reduced.

Norway rats – also known as cellar rats, sewer rats or wharf rats – are the invasive rat seen most often in Alaska. Norway rats are not from Norway; they originated in temperate and northern regions of Asia and were spread world-wide on sailing ships.

Those common names are insightful, Norway rats thrive around water and are excellent swimmers. Tests have shown that Norway rats can swim for 50 to 72 hours in 35 degree water before exhaustion; they can dive and swim underwater for 30 seconds, and thus they can readily swim through the water seal of a toilet to enter a house.

Norway rats are considered semi-burrowing rodents and may develop extensive burrow systems, although they are quite at home in abandoned buildings, warehouses, barns, stables and open garbage dumps. They are gregarious and under favorable conditions colonies of several hundred rats may develop.

As invasive rodents, roof rats are the perfect complement to Norway rats. They are agile climbers and tend to live in branches or the crowns of palm trees, and are a major orchard and plantation pest. Also known as black rats and ship rats, they are the most common rat found on sailing vessels.

Their original range included the Mediterranean region of Europe and Africa, stretching east through the steppe region of Asia to the East China Sea. Weighing just about an ounce, they are far smaller than rats – but possess the same ability to spread disease, damage property and consume vast quantities of food. Because of their habit of nibbling and then discarding partially eaten-food, they destroy more food than they consume. Like rats, they also foul stored food with waste.

“All the problems rats do, mice do as well, they’re jut smaller versions and overlooked a little more,” said Dunlevy.

One thing that makes rats so successful is their feeding behavior, a sophisticated balance of caution and curiosity. Rats display strong exploratory drive and thoroughly learn all aspects of their home environment. This inquisitive behavior would make rats easy to trap or poison if it wasn’t inhibited by another behavior called neophobia – a fear of new things. Rats will quickly detect but shy away from new objects in their environment.

“It’s a perfect strategy for survival,” Dunlevy said. “There are always some segments of a population that are at extremes, so one segment or the other will survive or be favored by natural selection.”