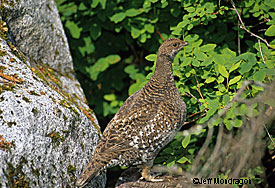 A blue grouse or "Hooter." Hooters are the most common grouse in Southeast Alaska, although ruffed and spruce grouse are found in some areas. Photo by Jeff Mondragon.

The hooting was incessant, and a small crowd of tourists gathered on the nature trail near the Mount Robert’s Tram near Juneau last spring. They pinpointed the tree that seemed to be the source, but they couldn’t spot the bird.

“Nope. It’s a grouse,” countered a passing youngster. They were clearly skeptical. Unable to find the hooter, the tourists ambled down the trail. The boy and his father circled the uphill side of tree until they spotted the chicken-sized blue grouse on a branch next to the trunk, still hooting its distinctive mating call.

Tourists aren’t the only folks that find grouse somewhat mysterious. Although the birds are sought after by hunters – and spring is a prime time for grouse hunting – there are plenty of questions about grouse that state and federal biologists would like answered.

This spring, the Alaska Department of Fish and Game sent surveys to 3,500 hunters, a sample of 30 percent of the licensed hunters in southeast Alaska. Wildlife managers want to learn more about hunters’ pursuit and success stalking southeast Alaska’s upland game birds, particularly grouse and ptarmigan.

Southeast is home to blue grouse (commonly called hooters), as well as ruffed and spruce grouse, and willow, rock and white-tailed ptarmigan. Hooters are the grouse species most common in the Juneau area. Researchers want to learn more about the distribution and abundance of these birds, where their ranges overlap and where they are mutually exclusive. It’s also important to determine hunter harvest levels and hunting preferences.

“We don’t have any concerns, and there’s no indication of any problems, but it’s responsible to gather more information,” said Dale Rabe, management and research coordinator for Fish and Game.

Rabe said in other parts of the country, grouse are a much sought-after game bird. Hunters specifically target grouse, often working with trained bird dogs. Rabe said in Alaska, hunters may be more sporadic about hunting the birds. Hunters who don’t specifically go grouse hunting will sometimes take grouse opportunistically during deer season.

“It may be that very few people hunt these birds,” Rabe said. “They’re difficult to get to.”

Grouse can be found at all elevations, but favor forests ranging from hundreds of feet above sea level clear up to the timberline. Rock and white-tailed ptarmigan are alpine birds, and willow ptarmigan (the state bird) are found in alpine and muskeg environments. 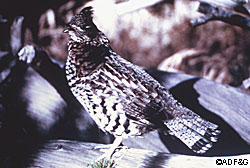 Ruffed grouse are one of four grouse species found in Alaska.

Juneau bird hunter Paul Rodriguez, Sr., has been pursuing grouse in Alaska for 26 years. He said the liberal bag limits don’t seem to be hurting the population, and he hasn’t noticed any decline in bird numbers over the years. He said he had just received the survey in the mail and planned to participate.

“I normally go in mid April, when the snow has melted enough that you can get high up,” he said. “I like to go for blue grouse, the really big ones, and they’re up at the timberline.”

Rodriguez hunts around Juneau and also travels to the Haines area specifically for the grouse hunting. He said he used to hunt with a shotgun, but now prefers using a .22 pistol. He often carries a .44 handgun as well for bear protection, loading some of the revolver’s cylinders with bird shot.

Rodriguez said most of the grouse hunters he knows hunt in the spring. “I think we’re the only state in the U.S. that has a spring hunt,” he said.

Blue grouse are found throughout most of southeast Alaska, but not farther north. The smaller ruffed grouse inhabit Interior Alaska and can be found in a few areas of Southeast. Spruce grouse occur in Interior Alaska, and in Southeast, spruce grouse are thought to occur on several islands. Just how unique these populations are compared to spruce grouse in Canada and the Northern U.S. is a question the U.S. Fish and Wildlife Service is interested in answering, and the agency is providing funding for part of the study.

“There is really a focus on that species, which is found mostly on Prince of Wales Island,” Rabe said. “However, this gives us the opportunity to take a look at the bigger picture, now that we have funding to collect data.”

The Fish and Wildlife Service plans to do a genetic analysis and bring better information to the discussion to determine how closely related these species and subspecies are, Rabe said.

Blue grouse average about 2 ½ pounds – twice the size of spruce grouse – but the two species can be difficult to tell apart, particularly the females. To eliminate any doubt, and to better determine the range and distribution of the different grouse species, Fish and Game is inviting hunters to send in a wing and a tail from each hunted bird. Biologists can determine species, sex and age from the tails, and by knowing where the birds were harvested, can better identify the distribution of both grouse species. Envelopes and mailers will be provided so cooperating hunters can simply mail the wings and tails to Fish and Game. Any interested hunter can contact Fish and Game to participate by calling the wildlife conservation offices in Ketchikan (225-2475), Petersburg (772-5235), Sitka (747-5449) or Douglas (465-4265).