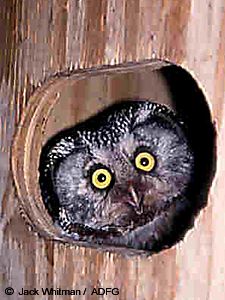 Appropriate cavities for nesting can be in high demand in some areas, and boreal owls will use nest boxes if they are available.

It was so exciting it practically eclipsed the 10 or more great horned owls I heard bellowing throughout the forest that night. I could hardly believe my ears as the sustained, aggressive trill of a boreal owl penetrated the crisp night air. After weeks of listening I finally heard a boreal owl.

I’ve heard plenty of boreal owls call and not gotten that excited, but this was research, and for that you need data. If I carried a cell phone I would have called Jack Whitman immediately. I was forced to contain my excitement until I could turn in my data sheets a couple of days later.

Jack Whitman is the Interior and Northern Region nongame biologist for the Alaska Department of Fish and Game. Whitman is conducting owl research in the Interior Alaska, which includes owl hooting surveys along several routes outside of Fairbanks. Hearing any owls on a hooting survey is good because it provides baseline data, but Whitman is specifically seeking data on boreal owls.

Whitman, a veteran biologist with ADF&G, recently began this study of boreal owls in the Fairbanks area. Because of the relatively high densities of the owls in boreal forest habitat and their ecological value as an indicator species, Whitman is examining several factors of boreal owl ecology. He has placed more than 100 boreal owl nesting boxes in the forests outside of Fairbanks. Many of these nesting boxes are located along the owl hooting survey lines. In the spring, he will check all of the nest boxes to see if they are being used by boreal owls to raise young. Then he can compare the use of nest boxes use to the hooting survey data.

“If 20 nest boxes are used, how many of those (owls) were detected by the surveys?” Whitman said. “There has been lots of listening survey data gathered, but nobody knows how to interpret that data. This probably should have been figured out 10 years ago.”

So far this winter, very few boreal owls have been heard on the survey. “We don’t know what this means yet,” Whitman said, adding that “negative data is incredibly valuable data as well.”

It is a mystery why so few boreal owls have been heard this year. Some Canadian researchers speculated that boreal owls would be rare this year due to low vole populations. The nest- box-use data might provide some interesting clues to that mystery. 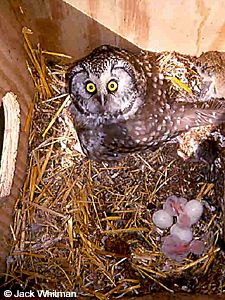 A boreal owl in a nest box, with eggs and newly-hatched chicks.

Boreal owls are small owls about 10 inches long. They prefer a mixed forest of broad-leaf and spruce trees, and normally nest in tree cavities such as those excavated by woodpeckers. Their song is a soft trill of constant pitch that lasts for one to two seconds and can be repeated frequently. The call is somewhat comparable to the song of a winnowing snipe. Boreal owls begin calling around mid-February and commonly call through April. Whitman says he has seen boreal owl nests with eggs as early as April 7th in McGrath.

Based on data from Europe, male boreal owls select the nest site and are the ones that call. Once they have paired up, they stop singing.

“They might call for an hour - or for two months,” Whitman said. That is why the nest box data are so important in figuring out detection rates. Depending on many environmental factors, hooting surveys may - or may not - reveal how many owls are really out there breeding.

Whitman has recruited about nine volunteers to assist with the six hooting survey lines that must be completed each week. These owl surveys can be long and tedious, taking three or more hours a night, depending on the location and length of each particular survey line.

A volunteer begins a survey one hour after sunset by driving to the starting point of an approximately 12-mile road route. The researcher carefully listens for any owl calls for a two-minute period every half-mile of the route. This includes recording a GPS location at each stop, getting away from the vehicle, recording the number of owls heard, the species, how many “hoot” series were produced by each owl and a compass bearing of each owl. (Sunset on April 12 was at 9:18 p.m., so the survey could start at 10:18 p.m.)

Only three species of owls are likely to be heard in the Interior in late winter and early spring: the boreal owl, the great horned owl, and the great gray owl. When the hooting is happening it can be pretty exciting, but for the month of March (when the boreals “should” have been singing) there was not much action at all. Still, it gives a person the opportunity to buff up on their constellations, observe the increasing number of satellites zipping around our orbit, catch a meteor here and there, and when it does happen, to get excited by the hoots of these seldom-seen nocturnal predators.