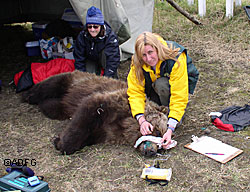 Like any veterinarian, Kimberlee Beckmen sees a lot of animals. But for Beckmen, the wildlife veterinarian for the Alaska Department of Fish and Game, it’s not dogs and cats, but bears, moose, birds and other wild animals.

Unlike most vets, a number of Beckmen’s patients have already expired. Beckmen is frequently called upon to determine the cause of death of different birds and mammals, or to investigate parasites and unusual tissue found in harvested game animals.

“A lot of the work is like being a medical examiner,” Beckmen said from her Fairbanks office. “The investigative work is fun. It’s satisfying when you can figure out what happened.”

Among other things, Beckmen performed necropsies on 20 moose last year. She discovered some surprising medical conditions, but nothing of major concern to the population. Keeping devastating wildlife illnesses such as Chronic Wasting Disease out of Alaska is a priority.

“There are a lot of diseases we’re fortunate we don’t have in Alaska, and we don’t want them,” she said.

Beckmen said she enjoys monitoring the health status of the animals that are so important to Alaskans, but disease surveillance and diagnostic pathology are only part of her job. Beckmen works closely with wildlife biologists in the field. She has surgically implanted tracking devices in grizzly bears and harbor seals, taken fat biopsies from anesthetized Steller sea lions, immobilized bison and performed ultrasound exams on pregnant moose.

Sometimes her work is in the classroom. In mid-January, she was preparing to teach a group of wildlife biologists to perform necropsies and take tissue samples. It was 43 degrees below zero outside that morning, and Beckmen was shaking off lingering flu symptoms as she sorted through wolf carcasses, roadkills and animal organs that would be used in the hands-on lab session of the upcoming workshop.

At a similar workshop in Juneau last year attended by wildlife biologists from throughout Southeast Alaska, Beckmen’s students examined animals ranging from a marten and a loon to a moose fetus. Beckmen demonstrated how to take and preserve tissue samples for bacteriology, virology and toxicology testing, and biologists got hands-on experience.

Beckmen has been with the department since October of 2002, and called her position “her dream job.” “I never wanted to be in private practice as a veterinarian at all,” she said. “I went into veterinary medicine to study pathology of wildlife, especially marine mammals.” 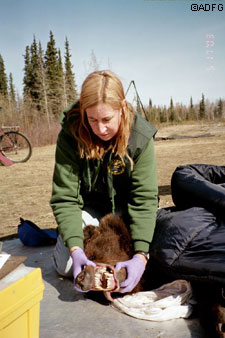 She returned to Illinois for vet school, and went on to a zoo internship in South Carolina, then a marine mammal pathology fellowship in California. “I did lots of necropsies, over 500 marine mammals - seals, sea lions, whales and dolphins - that was my biggest area of expertise before I came to Alaska.”

“Free-ranging wildlife wasn’t really thought of as a career path for veterinarians when I was in school. I was thinking mostly about being a zoo veterinarian,” she said. “Zoo vets treat individual animals, wildlife veterinarians are looking at population medicine and herd health, and there’s quite a bit of difference. When I was starting 15 to 20 years ago, there weren’t really the opportunities to work with only free-ranging wildlife, and so people went the zoo track.”

Beckmen moved to Fairbanks for graduate school in 1994. As she worked on her Ph.D. studying fur seals on the Pribilofs, she participated in a number of research projects with scientists from Fish and Game and other agencies. She worked with polar bears for the U.S. Geological Survey, grizzly bears with Harry Reynolds and moose with Ward Testa and Howard Golden of Fish and Game.

“When I went to UAF to study, this was the job I wanted,” she said. When the department’s former veterinarian retired, she was well-qualified to step in.

“The stars all aligned,” she said. “I had experience with anesthesia and immobilization, I had worked with Fish and Game on projects before I graduated and I’d been out helping biologists.”

Beckmen is also involved in research of her own, which harkens back to her days as a marine biologist.

“A third of my time was supposed to be my own research, but really it’s only about five percent,” she said. “My own research is looking at the health of Steller sea lions.”

Beckmen was slated to spend ten days in mid-January in Prince William Sound to participate in a Steller sea lion capture and research project. Sea lion work has taken her to Southeast Alaska in August and to the chilly waters off the Aleutians in February.

Of all her duties and responsibilities, Beckmen said the biggest issue she’s facing in the coming year is surveillance for Chronic Wasting Disease (CWD). A debilitating and fatal illness that affects the brain of deer and elk, it has wreaked havoc for wildlife managers in a number of western and Midwestern states in recent years. CWD has never shown up in moose or caribou. There is no evidence that CWD is present in Alaska, and Beckmen wants to keep it that way.

“We have 12 elk farms in Alaska, and that’s a potential to introduce it. We don’t have it now, but we’ve had elk imported to Alaska as recently as two years ago,” she said. “There’s evidence it has crossed from captive elk and deer to wild animals, and a fence around a game farm isn’t going to keep it from making a jump. That to me is the biggest nightmare. I look at wildlife veterinarians in states like Wisconsin where they’ve been dealing with CWD and it’s made their lives hell. It’s all they work on anymore.” 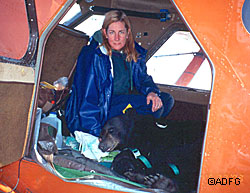 Bear in a Beaver: Beckmen helped with the relocation of this black bear, monitoring the bear's status during the flight.

Right now, Fish and Game is focusing surveillance efforts on Kodiak Island. There is an elk farm there, and a population of Sitka blacktail deer. A number of tissue samples have been taken from hunter-harvested deer, and Beckmen will be submitting those tissues for evidence of the disease. Next year the monitoring focus will expand to Southeast Alaska.

Another part of Beckman’s job is addressing animal welfare issues. She heads the department’s animal care and use committee, which ensures that research and management is conducted in a humane manner for the animals.

Beckmen also plays an essential role in all Fish and Game research and management projects that involve immobilizing drugs.

“Anytime an animal is drugged there has to be a vet supervising,” she said. “Even though there often is not a vet standing right there, there’s a vet of record who has approved that and supervised the dosing and administration and ensured the biologist was properly trained and experienced.”

Drugs are an important tool for studying wildlife, and essential for capturing and equipping bears, moose and other wildlife with transmitters. These tracking devices are critical aids to wildlife research and management. Caribou equipped with radio collars help scientists track herd migrations and monitor the population and status of Alaska’s vast herds of caribou. Radio collars are providing biologists with profound insights into brown bear habitat use and seasonal movements.

Darts are loaded with immobilizing drugs, and a fraction of the dose needed to sedate a half-ton moose could kill a person. The narcotic Carfentanil is used most often for moose, caribou and bison in Alaska.

“They do well with that drug. It can be administered with a dart; you just need a small volume, and it takes effect quickly. We can reverse the effects as well, so when you give the animal a second injection it wakes up,” Beckmen said. “We use different drugs with different species. We use Telazol for bears and pretty much all the carnivores - bears, wolves, lynx, wolverine, they respond much better with that.”

Beckmen is responsible for the accounting for these drugs, and for training biologists in using drugs for capturing animals. She and other Fish and Game biologists also assist the U.S. Fish and Wildlife Service and the Forest Service with research.

“We wind up doing a lot of joint projects where Fish and Game has the capture expertise, and the vet on staff to handle and dispense the drugs,” she said. “I could be in the field all the time if I wanted to.”