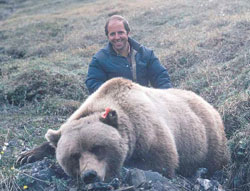 Bear biologist Harry Reynolds of Fairbanks with a tranquilized grizzly.

The plight of the few remaining Gobi bears isn't of much interest to your average Alaskan, but it is to Harry Reynolds.

"It's not going to affect our lives in Fairbanks, whether the last 25 Gobi bears become extinct, but it's going to affect the lives of people in Mongolia," said Reynolds, a brown bear biologist for the Alaska Department of Fish and Game in Fairbanks. "The world is poorer when you lose something."

As one of the world's leading authorities on brown bears, Reynolds traveled to Mongolia last month on his own time and dime as part of an international team to study the plight of the Gobi bears, a species of brown bear that exists in the Gobi Desert and is nearing extinction.

The mere fact that bears can survive in the Gobi Desert, which Reynolds said "makes Nevada look like a Garden of Eden," is remarkable.

But that's one of the things that fascinates Reynolds about bears: their ability to adapt to different environments, which is one of the main reasons bears, particularly brown bears, have been so successful as a species. They live in both the Arctic and the desert, and they eat everything from plants to whales. In terms of species distribution, only humans and wolves surpass brown bears, Reynolds said.

Whether it's Mongolia or Alaska, Reynolds' main concern is the conservation of bear populations. He has been studying brown bears for 45 years, the past 32 for Fish and Game in Alaska. Reynolds' career has spanned grizzly bear research from its beginning to its present.

Although he wasn't raised by grizzly bears, Reynolds basically grew up with them. His father, Harry Jr., was a ranger in Yellowstone National Park in Wyoming. The park served as Reynolds' playground, and the animals were his playmates, so to speak.

"We had a black-and-white TV that picked up only one station, so I didn't watch much TV," said Reynolds of his childhood. "I always would rather be out walking in the woods looking at coyotes, elk and eagles."

When he was only 15, Reynolds stumbled upon a chance to work with brothers John and Frank Craighead, friends of his father's who pioneered grizzly bear research in West Yellowstone.

The Craigheads first developed and employed radio telemetry to study bears. He spent almost 10 years working with the Craigheads, first as a high school student, then as an undergraduate at the University of Montana and finally as a grad student. As a teenager, Reynolds started out by helping bait and clean grizzly bear traps the Craigheads used to capture bears in the park. Before he was done, Reynolds was the one capturing and tracking the bears in the backcountry.

"I just fell into it," Reynolds said of ties to the Craigheads. "It's what I liked to do. I was always interested in predators, whether it was brown bears, coyotes or raptors."

An old black-and-white photo on the wall in his cramped office, which is adorned with photos of grizzly bears and his two daughters, shows a young Reynolds and a friend holding a pair of golden eagles on their arms. The photo was taken while he was doing his master's thesis on the raptors in Montana.

Now 60, Reynolds is one of the most respected brown bear biologists in the world. In February, he was elected to his second term as president of the International Association for Bear Research and Management (IBA), an organization that includes professional bear biologists from around the world dedicated to the conservation of all bear species.

Serving as president of the IBA speaks volumes on Reynolds' reputation in the world's bear-research community, said fellow Alaska bear biologist John Hechtel, who worked with Reynolds for 15 years in Fairbanks and has known him for 30 years.

"Everybody involved in bear research and management turns to the IBA for information," said Hechtel.

Although some biologists use the animals they study to advance their own agendas, that's not the case with Reynolds, said Hechtel.

"Some of these high-profile species like grizzly bears attract people that get involved just because it's glamorous," said Hechtel. "Harry's concern is for conservation of bears, not advancement of his own ego."

Longtime Fairbanks bear-hunting guide Joe Want has known Reynolds for more than 30 years and calls him "a voice of reason" within the Department of Fish and Game, high praise considering that guides often don't see eye-to-eye with biologists.

"When you study something that long, pretty soon you start to think of them as being human; you start anthropomorphizing," said Want. "Harry is a one of those biologists that has been able to work on a particular species for an extended period of time and maintain the necessary detachment from that species to be objective."

Although he has captured, tracked and studied what he estimated to be 1,500 brown bears in Alaska, Reynolds has never named the bears he studies, even those he has followed for several years. He refers to them simply by number.

Reynolds views brown bears in Alaska as a resource, not an endangered species. As a state wildlife biologist, his goal is to make sure that resource is utilized but not abused.

"What we're trying to do is determine levels of sustainable mortality, which translates to sustained yield," he said.

When Reynolds started studying grizzly bears, little was known about the species. Biologists didn't have a clue as to how many brown bears there were in Alaska.

"One of the first steps to managing wildlife effectively is to know how many animals you're dealing with so you know what portion of the population you can reduce or exploit," he said.

Today, with the help of work by Reynolds, biologists estimate there are about 32,000 brown bears in Alaska, more than anywhere in the world except Russia.

"We're spoiled," Reynolds said of Alaskans. "We've got room for them to move around. We've got the food resources for them."

Significant improvements have been made in the way biologists study bears today compared to when Reynolds started. Biologists no longer solder together their own radio collars, and bears are tracked with airplanes or computers instead of biologists walking around the woods with an antenna. Biologists now use DNA testing to build population models and estimates.

Even with advances in technology, Reynolds said biologists learn more by studying the bears themselves rather than data collected by a computer.

"You can learn a lot sitting at a computer, but if you don't see the animals, then you're missing part of the picture," he said.

For example, a GPS radio collar might tell you a bear spent five straight days in June on a specific hillside, but it won't tell you why it was there.

"You might make the erroneous assumption that from the 15th to the 20th of June, this bear really liked this hillside," Reynolds explained. "What it doesn't say is that there could have been a sweet, young thing there and it was breeding. Or that it was on a moose carcass. Or it might have been injured and was recovering."

Although grizzly bears have been driven to extinction in many of the Lower 48 states, Reynolds doesn't foresee that happening in Alaska, in large part because much of the state - more than 60 percent - consists of federal land that has been closed to development.

"We have such a bounty of resources we can afford to do some things people can't do elsewhere; we've got chances to squander," Reynolds said. "If we didn't have a lot of bears, I'd be more worried.

"The desire of people to accommodate wild species is a little different" than it used to be, Reynolds added.

Whether or not anything can be done to prevent the demise of the Gobi bears remains to be seen. Scientists talked about everything from supplemental feeding to a captive breeding program as ways to save the population.

"The guiding principle is to do no harm to the bears that are left," said Reynolds. "The countryside that was available to them in the 1950s (when a major decline was detected) is still there.

"What they hope is if the population can grow naturally, then some bears could be translocated to previously occupied habitat," he said. "It's possible. It's really an intriguing situation."

At this point in his career, Reynolds' objective is to do everything he can to protect bear species around the world.

"One of the things that keeps me going is the potential for making a difference for bears," said Reynolds. "It's a powerful force, and I'd like to be a part of it.

"I want to make sure that bears still roam the same forests 100 years from now that they do today and would like to see them even regain some of the territory they've lost," he said. "That's what drives me."

This story originally ran in the Fairbanks Daily News-Miner and has been reprinted with permission.