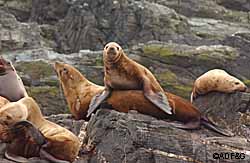 View from the top: A young sea lion piggybacks on his mother to get a better view. Biologists are studying Steller sea lions to learn about their movement and dispersal, survival rates and maternal behavior. Photo courtesy ADF&G

About 75 Steller sea lions were crowded on the rocks at the haulout on Benjamin Island near Juneau, bellowing and roaring as they jockeyed for space. As the tourists aboard the whale watching charter snapped pictures and peered through binoculars at the massive marine carnivores, one woman turned to the onboard naturalist with a question:

“Why does that sea lion have a big number on his side?”

It’s a question naturalist Abbey Norman heard off and on all last summer. Since 1994, about 2,400 Steller sea lions in Southeast Alaska, and about 1,200 in Western Alaska, have been marked with a distinct letter and number code that allows biologists to positively identify individual animals.

The mark indicates where the animal was born. F517, for example, is a female sea lion born in June 1994 at Forrester Island, a rookery west of Dall Island, near the U.S.-Canada border. She has been resighted 23 times since, at sea lion haulouts and rookeries throughout Southeast. She spent 10 days at South Marble Island in Glacier Bay in 1997, and in 2003 she was seen nursing a pup at Biali Rocks, a haulout on the outer coast of Baranof Island, south of Sitka. She was seen again in June of 2004 nursing a juvenile at a haulout near Windham Bay in Stephens Passage.

The ability to identify individual animals is key to understanding why the populations of Steller sea lions in Alaska have changed so dramatically in recent decades. In Western Alaska sea lion numbers have plummeted, and in Southeast Alaska the population is growing.

Over the past 30 years the western stock has declined by more than 80 percent, and beaches and haulouts that once teemed with animals are near empty. In 1997, the western stock was classified as endangered under the Endangered Species Act. The eastern stock, classified as threatened in 1997, is growing, and animals have colonized new rookeries and haulouts in Southeast. Overall, however, the population in Alaska has declined more than 50 percent from the estimated 242,000 animals present in the early 1970s.

As the western stock declined, it became apparent to biologists that it was increasingly important to determine survival and reproduction rates of sea lions, and the amount of interchange between the stocks. But without being able to identify individual animals, it was difficult to understand how and why the populations were changing.

“It’s absolutely critical to be able to positively identify individual animals,” said biologist Bob Small, marine mammal coordinator for the Alaska Department of Fish and Game. “Plus you can learn so much more when you have additional information, like the sex and age of those animals.”

Sea lions are captured as pups in early summer at their natal rookeries – the sites where they are born – and marked with a brand that creates characters two or three inches high. As the animals grow, the marks become larger as well.

“Four hundred pups were marked in both 1994 and 1995 at the Forrester Island rookery,” said Lauri Jemison, a biologist with the Alaska Department of Fish and Game’s Steller sea lion program. “From 2001 to 2004, pups were captured at all four rookeries in Southeast Alaska, and 300 to 500 pups were marked each year. Efforts to resight marked animals have really increased since 1999.” 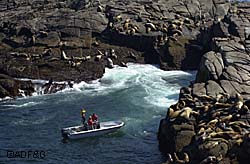 Resighting sea lions: Alaska Fish and Game researchers maneuver a skiff near a sea lion rookery in Southeast Alaska. Biologist Lauri Jemison is perched on an extension ladder secured to the deck to get a better view of marked animals. Photo courtesy

By observing these marked sea lions over the years, scientists expect to estimate age-specific survival rates and reproductive rates and to determine how much mixing occurs between the eastern and western stocks.

“It’s going to be an amazing database,” Small said. “This study in particular will give us the vital rate information about which portion of the population may be in decline. Is it because females aren’t giving birth? Is it because the young aren’t surviving?”

As these sea lions mature and have pups of their own, biologists can learn about maternal activity – whether females return to their natal rookeries to breed and have pups, where the animals that colonize new rookeries come from, and the ages at which young animals are weaned.

Jemison said every summer biologists visit rookeries and haulouts throughout Southeast and document sightings of marked animals. State biologists also work cooperatively with other organizations and agencies, including the Seattle-based National Marine Mammal Lab, the Alaska SeaLife Center, the University of British Columbia and the Alaska Sea Otter and Steller Sea Lion Commission.

Winter is an important time as well, and biologists resight animals during four sampling periods between December and April. Jemison has been busy this week coordinating and equipping four teams in Southeast Alaska to collect resight data. The teams are working in Frederick Sound, at Benjamin Island, at Tenakee, and at Gran Point (near Haines). Two groups work from skiffs and two observe from shore.

To ensure that all resight data are completely accurate, every observation includes a photograph. Photographs are also used to build a photo library database.

“We need to have photo documentation,” Jemison said. “We’ve had people deliver lists of sightings, and although we really appreciate their effort, it’s not unusual to receive lists with brand numbers that do not exist. We can’t have erroneous data.”

The National Marine Fisheries Service recommends that people remain at least 100 yards from sea lions, and Jemison said it’s important that people not violate that in an attempt to photograph an animal.

Jemison encourages people to report any sightings of marked sea lions entangled in garbage or fishing gear. Sea lions have been seen hooked with fishing gear and with packing bands around their necks. The bands eventually become embedded in the animal’s neck as the sea lion grows, likely causing a slow, painful death in many cases.

The number of animals breeding at Forrester Island, the largest rookery in Southeast Alaska, has remained stable, while the overall population of the eastern stock has increased through growth at newly established rookeries.