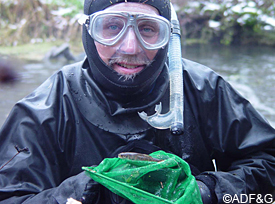 Face down in the freezing water of a remote Alaska salmon stream, Bob Piorkowski was hunting an unwanted invader - Atlantic salmon. Bundled into a bulky dry suit and buffeted by the current, Piorkowski passed over tens of thousands of native fish and was happy to come up empty handed.

As the coordinator of the Alaska Department of Fish and Game's Invasive Species Program, Piorkowski has monitored Atlantic salmon sightings in Alaskan waters for years. He’s now taken it one step further, sneaking up on them in freezing streams.

Snorkeling in Alaska is cold, difficult business. An armed partner to watch for bears is a requirement – either from shore or an inflatable canoe nearby.

“You get pounded by rocks and poked by fallen logs a lot, and you may need to tape up your drysuit - or tape up yourself,” Piorkowski said. “Sometimes you are three or four miles from a road, or you are flown in from somewhere.”

“Atlantic salmon are incredibly ecologically plastic and are very territorial and aggressive,” Piorkowski said. “They’re known as the leaper—they’ve been seen above 15-foot falls where no Pacific salmon are found.”

Currently there are more than 100 Atlantic salmon farms in British Columbia and six in Washington. This, combined with the small but growing body of evidence of escape and survival of Atlantic salmon in Alaska waters, has been met with growing concern from Alaskans. Finfish farming is illegal in Alaska. An introduction of Atlantic salmon into Alaskan streams at a time when the runs of Pacific salmon are low raises fears about the possibilities of reproductive proliferation, competition for food and rearing habitat, and the spread of diseases and parasites.

“Our salmon are very specialized ecologically,” Piorkowski said. “Generally, the more diverse an ecosystem is in terms of the numbers of species in it, the more stable it is. Whenever you have farming, you’re dumbing down the population. Less genetic richness results in homogenization.” 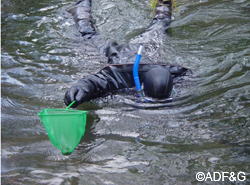 Now I’m an otter: Piokowski has successfully captured a juvenile Atlantic salmon after waiting, arm poised above his head.

Atlantic salmon escape from pens in many different ways. Torn nets are the most obvious escape pathway and often result from seals biting fish right through the net. The seal gets a snack, and the net gets a big hole. A more insidious escape route is the leakage (deliberate release) of non-performers (runts) who just swim away when small-mesh nets are replaced with large-mesh nets around the pen. This number is estimated at one to five percent of production, which could mean as many as 100,000 to 500,000 fish per year in the Pacific Northwest. No research has been done on this.

Piorkowski received training in June 2003 at the University of Malaspina in Nanaimo, Canada, to identify Atlantic salmon by snorkeling. For snorkeling in water that hovers below 40°, the gear requirements can be daunting: dry suit, heat packs, felt shoes or cork boots, dry gloves, hood, goggles with anti-fogging compound, and a fanny pack with a phone, radio, extra heat packs, bear spray, duct tape, a first aid kit and food - “I like some of those low-carb bars” - all in waterproof coverings.

This year Piorkowski, working with ADF&G Sport Fish steelhead biologists, surveyed three streams: the Situk River (Yakutat), Ford Arm (Sitka), and Ward Creek (Ketchikan)—all of which have had Atlantic salmon sightings in the past. None were found. The surveys were done in May and early June, during the latter part of the stream’s steelhead runs.

“That’s a key time of the year,” Piorkowski said. “We’ve found they (Atlantics) will tail along with the steelhead. Like steelhead, they will also go into streams in the fall and overwinter, coming back out in the spring.”

Visibility is often poor, even in the best conditions. Standing up can disturb the bottom of the stream, further reducing visibility. With thousands of fish in murky water, Piorkowski estimates he can only survey about one kilometer a day. Piorkowski’s background as a biologist and fisheries scientist is an enormous help in his snorkeling surveys.

“You have to know stream ecology to know where the rich areas are,” he said.

Piorkowski is looking for both adult and juvenile fish. The fry are just three or four inches long, and may be mixed in with steelhead, rainbow and cutthroat trout, and chinook and coho salmon fry. Adding to the challenge, Atlantic salmon are skittish and notoriously difficult to catch. Electrofishing is not effective because Atlantic salmon hide down among the rocks, and minnow traps don’t work because the Atlantic salmon have large pectoral fins that function like rudders, allowing them to stay in one spot in fast currents. They don’t search for food like other salmonids, they just grab it when it comes close.

For Piorkowski, the best way to capture Atlantic salmon is to sneak up on them with an aquarium net. This takes patience and planning. As he approaches an Atlantic salmon with his net, he must raise his arm to get the net in place—“now I look like a fat otter” —and the Atlantic salmon vanishes. He waits until it returns, his arm still in place, and hopefully one quick scoop from underneath will catch it. Things often don’t work out so neatly. 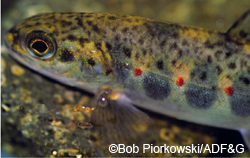 “You might be a half hour with one fish,” Piorkowski said. “If there is a large group, they will hang together and are easier to approach; if they are few and scattered, they are wary and scoot into protective habitat like reeds, grass or an undercut bank.”

Snorkel surveys in the dark, with a flashlight, allow him to see more ecosystem life because most predators are sight-dependent. “Once I stood up in a stream and dozens of bats flew around me because the bugs were attracted to the light from the flashlight,” he said.

Oliver and Gaudet’s paper outlines recommendations for minimizing the risks salmon farms pose to native species. They are:
1. Continuing the ban on salmon farms in northern B.C. and capping production in existing farms.
2. Mandating secure, closed-container systems to isolate farmed salmon stocks and byproducts from the surrounding environment.
3. A ban on further imports of Atlantic coast broodstock, which may bring in new diseases.
4. Holding existing farms liable for continued releases of farm fish or diseases.

“Education, closing pathways, survey and inventory,” is the department’s plan for reducing the likelihood of Atlantic salmon establishing populations and competing with native species. To help educate the public, Piorkowski initiated the Aquatic Nuisance Species Program in 1997. In 2001, the Southeast Sustainable Salmon Fund provided money for development of an Aquatic Nuisance Species Plan, which is available on the Fish and Game website.

Piorkowski has worked with his colleagues in the department to produce Atlantic salmon identification posters, cards, a website, and coordinated an Aquatic Nuisance Species Plan. Both commercial and sport fisheries are encouraged to report and return recovered Atlantic salmon. The identification cards have been distributed statewide to docks, commercial and sport fisheries, offices and schools. Additionally, ADF&G has a toll-free number to report catches. This number is 1-877-INVASIV or 1-877-468-2748.

Piorkowski is also part of the Atlantic Salmon Watch Program, which studies the problem of Atlantic salmon escapes from aquatic farms in British Columbia and adjacent waters. The ASWP monitors commercial and sport catches and observations of Atlantic salmon in British Columbia, Alaska and Washington in cooperation with the Alaska Department of Fish and Game and the Washington Department of Fish and Wildlife. The program relies on fishermen, fish processors, government field staff and hatchery workers to report observations of Atlantic salmon.

Additional information on Atlantic salmon is available on the web at http://www.adfg.alaska.gov/index.cfm?adfg=invasiveprofiles.atlanticsalmon_characteristics