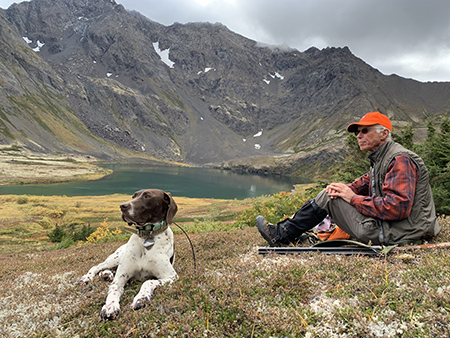 Ptarmigan hunter in the Chugach Mountains (Unit 14). ADF&G’s Statewide Small Game Program conducts summer brood surveys for grouse and ptarmigan with the help of volunteers with well-trained bird dogs, which locate birds and hold a steady point so chicks and adults can be counted. Photo Rick Merizon, September 2020.

For those of you that love dogs, love the backcountry of Alaska, and want to read some uplifting news for a change - hopefully you’ll enjoy this article. This is a story of the power of like-minded people coming together to accomplish a shared goal for the good of our shared wildlife resources.

I have the privilege of working with ADF&G’s Statewide Small Game Program. About six years ago my colleague in Fairbanks and I initiated a project we learned about from a Norwegian friend and fellow biologist - summer brood surveys for grouse and ptarmigan. The data this project would collect would allow ADF&G, hunters, and members of the public to estimate early grouse and ptarmigan chick survival. This has many biological and wildlife management benefits. One, it allows biologists to better understand the productivity of a particular grouse or ptarmigan population, and two, it allows hunters to better understand what to expect going into the fall hunting season. In a normal year juvenile birds make up the majority of the harvest; therefore, if chick survival is low hunters can expect to see far fewer birds per outing than if chick survival is high.

All this is fine and good, but how do we estimate chick survival, you might ask? That’s where the dogs come in. Yes dogs, specifically, highly trained pointing dogs. Beginning in the spring of 2016, my colleague and I began recruiting volunteers and testing their dogs. Before joining the project, each dog must pass what we call a steadiness test. A dog is put through a simulation of what an actual brood survey is like. Either pigeons or quail are placed in a field and the dog is allowed to run freely. The hope is that each dog will stop, hold a steady point, and continue holding for as long as it takes for the handler to come in and “count the brood” and verbally or with a leash take the dog away from the bird(s) leaving them undisturbed. If the dog lunges or attempts to grab the pigeon or quail they are asked to continue training and attempt the test the following year.

Once a dog has passed the steadiness test each volunteer is assigned a survey route during the final two weeks of July. Up until 2021, survey effort was focused at Eagle Summit (Steese Highway), Delta Junction, Denali Highway, and Hatcher Pass (Palmer). However, an amazingly tragic thing happened in 2020…a global pandemic. Ah yes, the year all of us would like to forget! However, 2020 pointed out one great thing, in Alaska we have an abundance of wild spaces in which to roam, Covid-safe. Covid also created an incredible boom of interest among prospective volunteers to participate in our brood surveys. As a result, much of June was dedicated to creating new survey routes for ptarmigan in Chugach State Park, Kenai Mountains, and Sheep Mountain. In addition, June 2021 was busy running prospective volunteers and their dogs through steadiness tests. 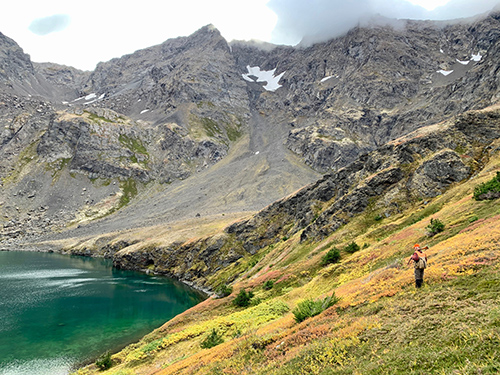 As a result, about 25 new volunteers joined the ranks in 2021 combined with a veteran volunteer crew of about 15 and expanded the overall effort from 130 kilometers (77 miles) of survey routes statewide to 180 kilometers (nearly 110 miles). The majority of brood survey routes are to enumerate rock, white-tailed, and willow ptarmigan. However, sharp-tailed grouse broods are also counted in Delta Junction.

With 40 volunteers trained, dogs tested, boots laced up, survey areas and routes assigned, volunteers were ready to hit the field in mid-July 2021. Overall, chick survival was documented to be very good at Eagle Summit for rock ptarmigan. As a result, it is likely hunters will see average to above average hunting there. However, along the Denali Highway, willow ptarmigan chick survival (which is the species upon which most of the routes focus) was very poor. This is likely the result of several significant snowstorms that impacted the Alaska Range and Talkeetna and Wrangell mountains in late May and again in late June. Poor weather immediately post hatch (mid to late June) has a significant impact on ptarmigan populations. Through our brood survey volunteers, we were able to identify this pre-season and inform hunters and fellow ADF&G staff. Over time, ADF&G can monitor chick survival in various locations to determine if appropriate management strategies are in place. 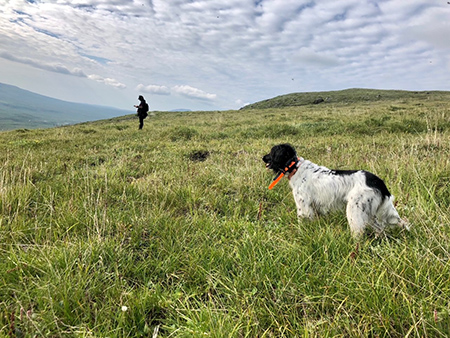 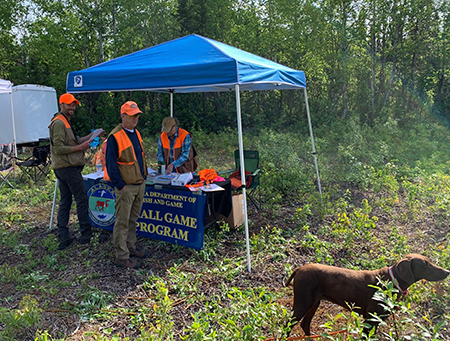 It is because of these very dedicated, hard-working volunteers, ADF&G’s Small Game Program has been able to collect vital population data on some of the most popular small game resources across the state. In total, volunteers amassed 575 hours of effort during a two-week effort in late July and drove over 8,000 miles to access survey routes.

However, the story doesn’t end with a sappy send off at the end of a great story…no, no. It ends with cold hard cash. Yes, for the first time the Small Game Program has been able to use this volunteer time and mileage as in-kind match that will leverage additional Pittman-Robertson (PR) federal aid funds. For those of you unfamiliar with PR funds, they are federal funds that are used by every state wildlife management agency to help fund (in addition to hunter license revenue) their staff, projects, and research to oversee and safeguard our collective public trust wildlife resources across the country. So, as a result of this extraordinary volunteer effort in 2021, not only was the Alaska Small Game Program able to collect vital population data on grouse and ptarmigan but they will also be able to fund additional population assessment projects and complete vital research to answer critical management questions. 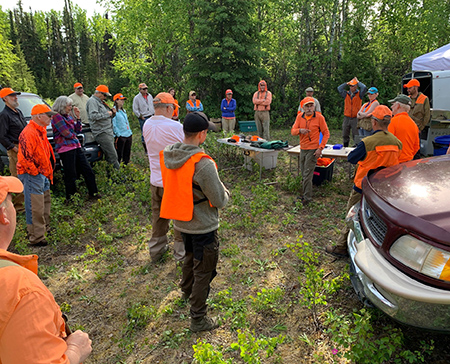 For all of the volunteers from 2016 through 2021, thank you! If you are interested in joining this band of dog trainers and dog lovers passionate about chipping in to evaluate upland gamebird populations and ensure highly impactful data are collected please contact either Rick Merizon (Palmer - 907.746.6333) or Cameron Carroll (Fairbanks – 907.459.7237). We would love to talk with you, tell you more about the project and our program, and meet you and your dog as we begin preparing for the 2022 brood survey season. For more information on current small game population status and summary of the 2021 population assessment projects please visit the Small Game Program webpage (www.smallgame.adfg.alaska.gov) and see recent reports under the “Research and Reports.”