Every year Alaskans migrate outdoors to enjoy our abundant opportunities for recreation on Alaska's rivers, lakes, and streams. Accordingly, each spring and summer, the Alaska Department of Fish and Game receives calls from the public requesting information regarding use of Alaska's waterways. Many of these calls come from frustrated fishers and boaters who arrived at a favorite stream and found posted signs or were accosted by landowners claiming ownership of the stream and the submerged lands ...   Access to Water ArticleContinued

Fighters. Junkies. Vagrants. Terms we don't usually associate with hummingbirds. But a record-setting rufous hummingbird and to two dedicated “humbanders” have brought some of these tiny birds' quirkier qualities to light.

Hummingbird banders Fred Dietrich and Kate McLaughlin live 3,530 miles apart, in the Florida panhandle and in Prince William Sound, Alaska. They belong to a network of professional and “citizen” scientists across the country that are capturing and banding hummingbirds ...   Hummingbird Record ArticleContinued

The Anchor River Sonar/Weir Project:
Counting Fish One Year at a Time 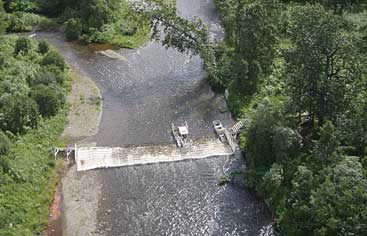 In a 1954 Anchor River stream survey report, fishery biologist Rodger Allin wrote: “The Homer highway was constructed in 1948; at that time it was only a vehicular trail and received little use by anglers. In 1949 further road work was done and cars and anglers started making regular trips into this area. As the road was improved and the reputation of the river became known, the fishing pressures mounted.”

Since then, the reputation of Anchor River has grown along with the number of anglers ...   Anchor River Weir ArticleContinued

Q: Can wasp spray be used as a cheaper alternative to bear spray? Also, are Tasers considered an effective bear deterrent?

A: These questions were asked by several people this summer at Fish and Game bear safety clinics. The response from Fish and Game biologists was a firm NO to both questions. Neither wasp spray nor Tasers are considered proven bear deterrents.

(A Taser is an electroshock weapon that uses electrical current to disrupt voluntary control of muscles. It uses a ...   Bear Deterrents ArticleContinued