Wolves in Interior Alaska are getting help from state wildlife biologists.

A lice infestation is plaguing a number of Alaska wolf packs, and the Alaska Department of Fish and Game is treating some packs with Ivermectin, a parasite-killing drug. Biologists and the department veterinarian are monitoring the spread of the parasites, and working with others to determine if the tiny parasites have long been present at low, undetected levels in wild wolves, or if the lice were introduced from ...   Helping Wolves ArticleContinued

Dinosaurs of the Deep
Lake Trout are Freshwater Leviathans

With all of the excellent fishing to be had in Alaska, it seems odd that the largest freshwater fish is often one of the least fished for. A fish that can be caught any time of year, on everything from whole whitefish to wooly worms, and that serves up well around the campfire as well as it does on a candlelit dinner table… what more can you ask for?

Maybe the reason for this apparent neglect is because it is one thing to fish for these dinosaurs and another to actually catch them. The ...   Alaska Lake Trout ArticleContinued

Invaders from the Bayou
Be Careful with Crawfish

The king salmon netting crew for the Division of Sport Fish spends a lot of time sampling fish on the Kenai River during the busy summer months, and they are used to catching a lot of fish. Imagine their surprise, though, when last summer they pulled a crawfish from their gillnet.

Of all of the aquatic animals that could be collected in a gillnet on the Kenai River, crawfish are some of the least likely. Why? Because they ...   Crawfish Invaders ArticleContinued

Rockfish Through The Ages
Local Traditional Knowledge of Rockfish

By ADF&G Division of Subsistence staff

Other Duties as Assigned: Karen Mitchell
Keeps Busy in Nome 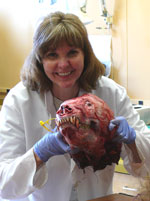 Just the fact that Karen Mitchell makes sure budgets are tracked and paychecks are timely makes her indispensable to Division of Wildlife Conservation employees from Bethel to Barrow, but she is appreciated for carrying out far more than the typical duties of an Administrative Assistant III.

Most people in her job category have a quiet office somewhere where they can record invoices; enter timesheets, balance budgets, complete travel authorizations and process personnel action forms – all ...   Karen Mitchell ArticleContinued 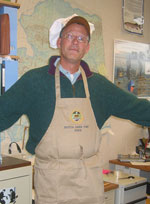 
Layer potatoes, fish, onions, begin and end with layer of potatoes and sprinkle flour and pepper on each layer ...   Salmon Casserole ArticleContinued