On a night-time beach, a wolverine discovers a black oystercatcher's nest, a simple bowl scraped into the gravel. Glowing with a ghostly luminescence, the wolverine deftly breaks open and eats all three eggs, leaving the empty shells.

The scene was captured by a remote camera with an infra-red illuminator. Biologists are using waterproof, solar powered cameras and digital video recorders to study black oystercatchers in Harriman Fjord in Prince William Sound.

“We monitored 24 ...   Spying on Nests ArticleContinued

Researchers have equipped 20 black oystercatchers with small, backpack VHF radios, and another 14 with surgically implanted transmitters that broadcast the bird's movements as they migrate.

Where do black oystercatchers go in the winter? How do they get there? Why do some migrate - or migrate farther - than others? These are a few of the questions biologists hope to answer by tracking oystercatchers this winter.

“This is the first time this has been done on this species,” said ...   Oystercatchers ArticleContinued 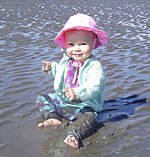 Many Alaskans have a deep-rooted connection to the outdoors. If we were asked how that connection was created, most of us would reflect back to our childhoods. We fished, hunted, farmed, explored, and swam. Some of us may have been blessed with a special adult – teacher, relative, or neighbor – who nurtured an interest in the environment. Others of us may have simply been encouraged by parents to play outside. But regardless of how that bond with nature was forged, we've grown into adults who care ...   Kids and Nature ArticleContinued

Some Alaska Department of Fish and Game offices are staffed by biologists, technicians, researchers, outreach and support personnel. They understand wildlife management, fish biology and the regulations that govern hunting, sport and commercial fishing.

In the two-person office in Wrangell, Alaska, a coastal Southeast community of just 2,000 people, Kim Fisher may wear a dozen hats in one day.

Fisher is the lynchpin of the Wrangell office. Depending on the season, she can be ...   Linchpin in Wrangell ArticleContinued

When Carol McIntyre conducted her annual golden eagle nesting surveys in late April this year in Denali National Park and Preserve, she had a hard time keeping her eye on the sky because of what she saw on the ground. "I've never seen that many (snowshoe) hares in the 20 years I've been here," said McIntyre, a biologist for the National Park Service who studies golden eagles. "In some of the willow thickets with good browse, it was like the ground was moving there were so many hares."

A quick visit to my neighbor Fran to work out the schedule for feeding her cat turned into trying out a new wine, and some more wine, and then a buzzer went off and she leaped up to get the something out of the oven: venison stew.

Would I like to stay and have dinner? No need to ask twice. Fran is a wonderful cook who just throws stuff together and somehow it all works. So she poured more wine and fixed me a bowl of stew. As I helped myself to seconds, I asked her how she made it.

Do all bears hibernate? How do wood frogs freeze solid? How far can caribou migrate?