A sparrow-sized bird with an innocent-sounding name – the Eastern Yellow Wagtail – has been identified as the wild bird most likely to carry the highly pathogenic H5N1 strain of avian flu from Asia to Alaska. The wagtails have arrived in North America and are now nesting in western Alaska. Scientists are capturing the little long-tailed birds and taking samples for testing. “It’s going well right now,” said Steve Matsuoka in late June. Matsuoka is with the U.S. Fish ...   Sampling Wild Birds Article Continued 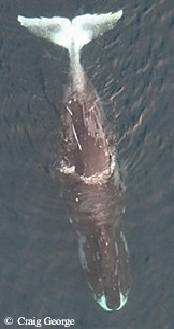 On May 12, a team of scientists near Barrow, Alaska, equipped a 45-foot-long bowhead whale with a satellite transmitter. Just one month later the bowhead had moved about 1,000 miles east, through the Beaufort Sea into Canadian waters. The whale, known by its transmitter number as 60010, is already providing biologists with valuable information on the movement and migration of bowheads.

Marine mammal biologist Lori Quakenbush with the Alaska Department of Fish and Game said that although ...   Tracking whales ArticleContinued

“A pair, two o'clock!” The engine on the Zodiac revs, the “netter” drops his spotlight and grabs the net as the “spotlighter” fixes the two birds in her light beam. The driver speeds ahead in the dark, the “netter” lunges and, as if it were easy, we've captured a Kittlitz's murrelet. Carefully removing the small seabird from the net, we hurry to place it in the carrier box. Hearing the mate calling from nearby, we quickly scan the water with spotlights and as if covered in reflective material, ...   Kittlitz’s Murrelets ArticleContinued

Watchin’ Them Dam Salmon Run
The Life of a Fish Counter

King salmon make their way up the Chena River through Fairbanks each July. Though the run is substantial as Interior Alaska waterways go, it does not compare to the more coastal runs on larger systems. Where runs are very large, sonar is used to count salmon and estimate run strength. On the tributaries of the Tanana River (Chena, Salcha, Chatanika), however, king salmon are counted by fish technicians, commonly known as “fish counters.” Cheaper than sonar and easier to maintain, fish counters ...   Counting Salmon ArticleContinued

The North Pacific Fishery Management Council
What Is It?

We often hear about them, and know in some general way that they have a great deal of power to affect the livelihood of many Alaskans. But what is the North Pacific Fishery Management Council? The recent upheaval over their decision to rationalize the crab fishery comes to mind. Who are these people, and how do they make their decisions?

What should be done to promote the recovery of Steller sea lions, and, when should the species be taken off the list of endangered species? These two fundamental questions are addressed in the revised recovery plan for Steller sea lions, which is now available for public comment. Once finalized later this year, the plan will represent the ‘blueprint’ for actions considered necessary for the conservation and recovery of the species. Other than the relatively small number of folks involved ...   Steller Sea Lions Article Continued

By Riley Woodford and ADF&G staff 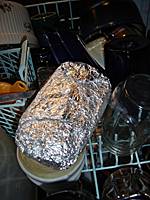 It's odorless, requires no oven, no pots or pans, and it works well for preparing Alaska's favorite fish. What can it be? Dishwasher cookery! If you think it's a joke, try it and laugh for joy.

How do you do it? Take one small salmon, or a piece of salmon, wrap it well with aluminum foil (use at least two sheets), find a suitable rack in the dishwasher, insert, close the door and start the machine. There is no reason why you can't wash your dishes at the same time. Just be sure the salmon ...   Dishwasher Salmon ArticleContinued