Biologist Steve Lewis held the little western screech-owl as Michelle Kissling attached the tiny backpack radio transmitter. For the next 10 months, this owl will be transmitting his location, helping to answer questions about screech-owls in Southeast Alaska.

Catching a screech-owl requires some tricks. A week earlier, in mid March, the two researchers had lured an owl near their mist net, a nearly invisible nylon mesh 8-feet tall and 40-feet long that would harmlessly entangle the bird. ...   Owl Research ArticleContinued

A few years ago, a Juneau trapper astonished state biologist Steve Peterson with an animal Peterson had never seen before. It was a fisher.

The fisher is a relatively large member of the weasel family, bigger and heavier than a marten but smaller than a wolverine. Alaska has not been considered to be home to fishers, but in recent years, at least four of these animals have been documented in Southeast Alaska.

Why do fewer women than men participate in outdoor activities such as hunting, fishing, and camping?

This question was being tossed around by a few women who were sitting around a backwoods campfire one evening in 1989. These women enjoyed hunting and fishing so much that they pondered the fact that they rarely encountered women in the woods, but often crossed paths with men.

One of the women at that historical campfire was Dr. Christine Thomas, professor ...   Outdoors Women ArticleContinued

Editorial:
If You Can’t Get There, You Can’t Hunt or Fish

The Department of Fish and Game manages fish and wildlife on all lands in Alaska, which includes authorizing harvests where there is a sustainable yield. The Alaska Boards of Fish and Game allocate harvests among user groups for subsistence, recreational, and commercial uses. The department closely monitors and cooperates with federal, state, and private land management agencies to assure our fish and wildlife management authorities are recognized, to protect our boards' regulatory authorities, ...   Editorial: Access ArticleContinued 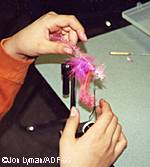 For the past ten years the Department of Fish and Game has partnered in Southeast villages with Cooperative Extension's 4-H program to deliver outdoor skills training focused on safety. The program has trained teachers and students from Hyder to Yakutat in a variety of outdoor skills and how to enjoy Southeast Alaska safely. In 2005, volunteers returned for the third time to Yakutat schools where over 600 students have received Hunter Education training since 2000.

Volunteers from the ...   Outdoor Skills ArticleContinued