Deer Rescue
Tired Deer Gets a Helping Hand from Trooper

By ADF&G and Department of Public Safety staff

Sitka black-tailed deer are good swimmers, but even a good swimmer has his limits. On July 9, 2004, Alaska State Trooper Jeremy Baum was patrolling the Thorne Arm area south of Ketchikan aboard the 18-foot patrol vessel “Whaler” when he saw a Sitka black-tailed deer buck in the water. As he approached, it was obvious the animal was having a difficult time swimming and keeping his head above the water.

“When he saw me he came swimming right toward me,” Baum said. “He swam over to the back ...   Deer Rescue ArticleContinued

Kristen Romanoff's job has taken her from wolf dens on Prince of Wales Island to classrooms in Sitka and Juneau. Romanoff is one of four educators with the Alaska Department of Fish and Game's Division of Wildlife Conservation. She's responsible for education in Southeast Alaska.

That can mean different things on different days. “It's very diverse,” Romanoff said.

Where The Fish Are
The Fish Distribution Database

Have you ever wondered, “Are there fish in that stream?”

Recreational anglers and wildlife viewers – anyone interested in fish for any reason – can check the Alaska Department of Fish and Game (ADF&G) website to learn about specific bodies of water and the anadromous fish that inhabit them. ADF&G, in partnership with the Alaska Department of Natural Resources, maintains the Fish Distribution Database (FDD), identifying those streams and lakes important to anadromous fish such as salmon, ...   Where The Fish Are ArticleContinued 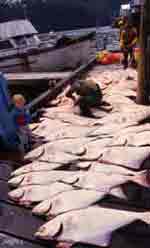 One of the greatest—and most important—challenges faced by Alaska's fisheries policymakers, managers, and regulators is balancing competing uses of our precious fisheries resources. Alaskans use these fisheries resources for subsistence, personal use, recreation, and commercial uses and take a very personal interest in allocation decisions. Finding the best way to distribute the harvestable surplus of fisheries resources is one of the Alaska Department of Fish and Game's (ADF&G) highest priorities.

There is such diversity in Alaska, in our hunters and in their methods of take, and Alaskans hunt so many different species -- and the Alaska Department of Fish and Game would like to reflect that in our regulations books. We would like to see photos of hunters from all regions of the state. We'd like to see youth and women hunters, those who hunt with muzzleloaders, and everything in between. And while we enjoy photos of hunters and their game, we are also looking for photos that show good examples ...   Photos Wanted ArticleContinued

Hunting season is over across most of the state for big game and waterfowl. But there is still small game, and Alaska's snowshoe and Arctic hares are fine fare in winter.

To field dress a hare, cut off the head. Break the feet at the ankle joints and cut them off. Pinch the skin on the rabbit's back and pull it so you can cut through the skin, cutting across the back. Hold the hide and pull the skin away in opposite directions, peeling it completely off. Remove the tail. Cut the abdomen ...   Recipe: Hare ArticleContinued